A Tour of Van Cortlandt Park

All the way to the Van Cortlandt Mansion. 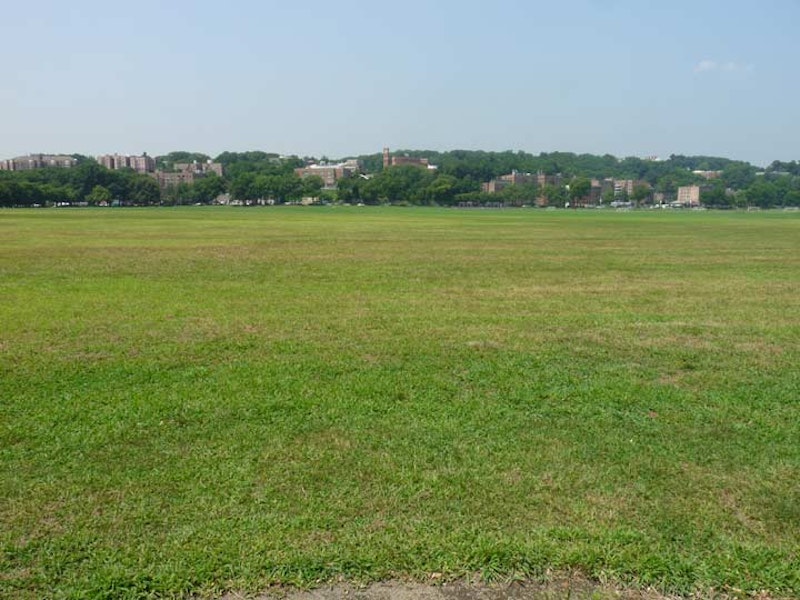 I recently gave a tour (the 119th in a sequence of Forgotten New York tours that began on June 1st, 1999 in Williamsburg) of Van Cortlandt Park, one of the vast ring of parks in the northern Bronx that also includes Bronx Park and Pelham Bay Park; acre for acre, the supposedly uber-urban borough, which I also call the Borough of Apartment Houses, accounts for more park acreage than any other borough. I thought I’d recount some of it for this entry.

The story of Van Cortlandt Park begins in 1699, when future NYC mayor Jacobus Van Cortlandt bought a large tract of the Frederick Philipse holdings in the northern Bronx. New York City obtained the land in 1888 and committed much of it to parkland.

Van Cortlandt Park is marked by rocky outcroppings made mostly of gneiss, a metamorphic rock with a distinctive banded texture. Streaks of mica can be found in the rocks, as well as quartz. Van Cortlandt Park's Northwest Forest contains the park's older-growth trees, featuring hickories, beech, cherry birch, sweetgum, red maple, and of course, the incredibly tall and straight tulip trees. Fauna fans won't be disappointed either as owls, bats, chipmunks, woodchucks, large gypsy moths, rabbits, raccoons, opossums, and coyotes can all be found here.

Buffalo (properly called bison, though I’ve never known why) were overhunted in western states in the frontier era, putting them in danger of extinction, Dr. William Hornaday of the Bronx Zoo acquired a few buffalo and bred them on the zoo grounds. By 1907, the Bronx herd outstripped the Zoo’s resources, so a few bulls and cows were transferred to Van Cortlandt Park, where they grazed the lawn. Later that year, they were sent to Oklahoma, where some of the buffalo are still descended from the Bronx specimens. 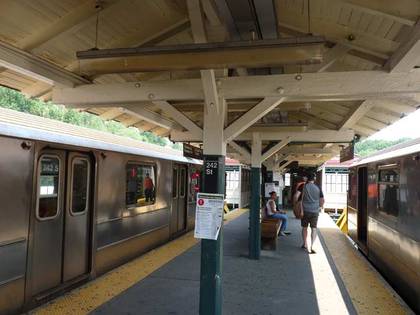 The northern end of the #1 train is on an elevated rail above Broadway, the very same Broadway that originated at Bowling Green downtown and, as NYS Route 9, continues north to Route 11, a short distance from the Canadian border. This is one of my favorite stations in the city because it resembles a small-town rail station, with a crosstimbered station canopy. An elevated walkway takes passengers over Broadway and leaves them on the park side.

Taking a park path east, you encounter a muddy trail that goes under a railroad overpass (I will get back to that later). If you follow the park roadway to the left, you encounter the Van Cortlandt Park Lakehouse, now a site for weddings and anniversary celebrations, but formerly the clubhouse for the nearby Van Cortlandt Park Golf Course. Lockers used by New York Yankees Babe Ruth and Mickey Mantle still have nameplates. 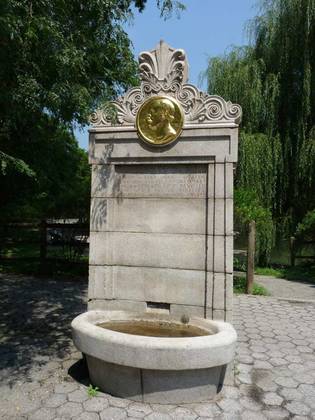 Before reaching the Lakehouse, though, your gaze is arrested by a granite pedestal with a basin and a gilded medallion. This is a horse trough dedicated to the memory of attorney Algernon Sydney Sullivan (1826-1887).

Sullivan, a native Indianan, established a law firm in Cincinnati in 1851 and then moved to NYC at the outbreak of the Civil War. His first notable case was defending the crew of the captured Confederate vessel Savannah, arguing for humane treatment as prisoners of war. He arranged for a prisoner exchange with the Confederates. He later fought the Tweed Ring as a reform Democrat, and served as NYC’s public administrator from 1875-1885, refusing calls to run for mayor. In 1879, Sullivan and his law partner, William Nelson Cromwell, organized the firm of Sullivan and Cromwell; the prestige firm is still in business today.

After his death, an Algernon Sydney Sullivan Memorial Committee raised $6,000 to commission a memorial fountain. The 10-foot high granite stele has a basin on both sides, as well as medallions with a profile of Sullivan fashioned by sculptor Jonathan Scott Hartley. The fountain was restored between 2001-2003; renovations included a resumption of function and a gilding of the two medallions on the front and back. 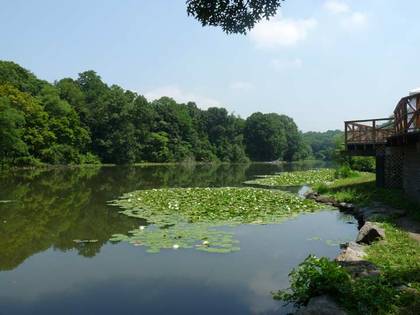 Though Van Cortlandt Lake is artificial, it’s been in existence for centuries. It was formed in 1699 by the Van Cortlandts by damming Tibbett’s Brook, which surfaces in the northern Bronx and Westchester, but runs in sewers further south until it empties into the Harlem River. It is named for early settler George Tippett, who as a Loyalist was forced out after the Revolutionary War was won. 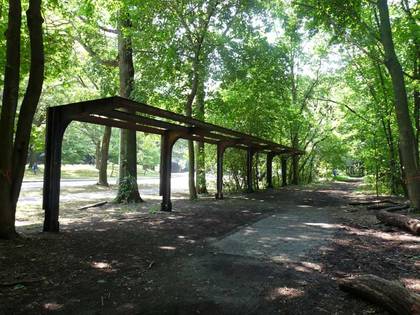 There’s a park trail in Van Cortlandt Park that was once a railroad. It can be reached by walking east through the park from the E 242nd Street stop on the #1 subway line, the last stop. When you reach an overpass, climb onto it: you have reached what is now the Putnam Trail.

The Putnam Branch, or "The Old Put" as it's called, originally ran from Sedgwick Avenue in the Bronx north to Brewster, New York on the NY Central commuter line, now called the Metro-North. It diverged from the Hudson Line just south of West Kingsbridge Road. Passenger service ended on the line in 1958, and the last fright train rumbled on the now-missing tracks in 1980.

Follow the Putnam Trail just north of that overpass (which is marked with the date it was finished, 1909) and you will arrive at the skeletal remains of the Van Cortlandt station. It throws shadows on the trail reminiscent of train tracks. The Putnam once let passengers out in the middle of the park, which was quite a convenience in the good weather months. 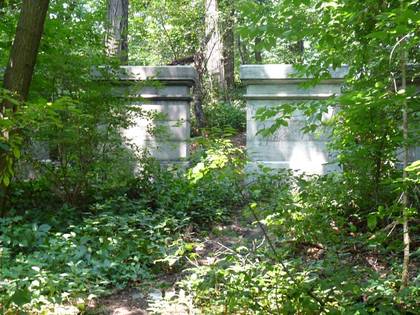 In the early 1910s, before the second Grand Central Terminal was built at Park Avenue and East 42nd Street (the first one was built in 1873), it was decided to test different varieties of stone to see what could stand up to the weather the best. These pillars were used to make the decision. The second pillar as you walk north, made of Indiana limestone, contains the stone selected… not for its durability… but because it was cheapest. 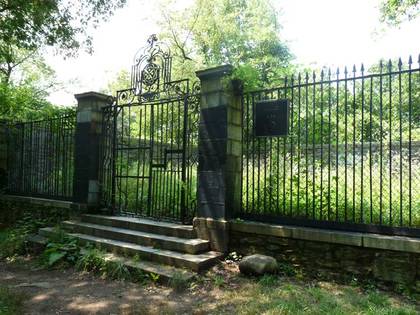 Take the new set of steps up to the vast Van Cortlandt Park lawn, where you will see cross country runners, cricket teams, or football teams depending on the season. This is the largest curated lawn in New York City; the total acreage of Van Cortlandt Park is over 1,100 acres. Follow the path skirting the lawn to a motorized cart storage area, turn right and take the path heading into the hills along the fenced-off golf course, and take the first left you see up a steep hill. At its crown you will see the burial vault of the Van Cortlandt family.

NYC municipal records were hidden from the Brits here in 1776, and in 1781 George Washington lit campfires here to deceive them while he marched to Yorktown to face Cornwallis in the decisive battle of the Revolution. By 1917, the region in view of the cemetery was being used as a training ground for World War I troops. Doughboys dug trenches and hiked the surrounding hills. Though the gate and surrounding fieldstone walls are intact, any visible markers have been removed to deter vandals. There is actually a second burial grounds in the park, but the so-called Kingsbridge cemetery is nondescript, marked only by a rusting fence.

Return to the lawn and hike across it to Broadway, walk north and turn left at West 251st Street. 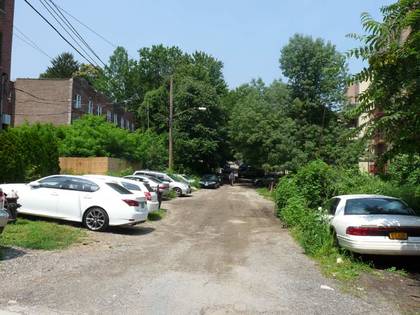 It looks like a regular driveway issuing north of West 251st just west of Broadway but this is actually one of the oldest intact roads in the state. The Old Albany Post Road is the former route used in the colonial era to bring mail from New York City north to Albany, hence its name. This is a one-block dirt road remnant of the ancient track.

In the 19th century, the Old Albany Post Road would be straightened and would become the roads we know today as Post Road, and the much longer Route 9, which encompasses Broadway in NYC and further north, known as the Albany Post Road. Route 9 goes all the way to the Canadian border. A further remnant, Albany Crescent, can be found in neighboring Kingsbridge Heights, and a much longer 6.6-mile dirt remnant of the OAPR remains in upstate Putnam County. 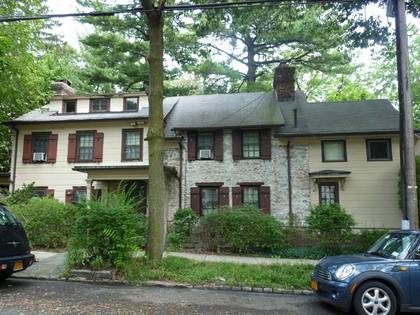 Continue to Post Road (this Post Road is a normal Bronx street) and turn right. You will encounter a two-story colonial with a stone-walled center with wooden shutters. This is the Hadley House, one of the oldest buildings in NYC under private ownership.

Brothers George and William Hadley built the center section of this 2-story colonial on Post Road just north of West 251st Street in the mid-1700s, making it just a little younger than the Van Cortlandt Mansion. In 1777, the Hadleys used the house as a garrison for a corps of volunteers serving the patriots’ cause. In 1829, it became the property of Major Delafield, along with much of the rest of Riverdale and Fieldston.

In 1915, Dwight James Baum, who had a hand in so many of Riverdale’s architecture, remodeled the Hadley house, adding wings to the north and south. Baum was careful to maintain the house’s original features. 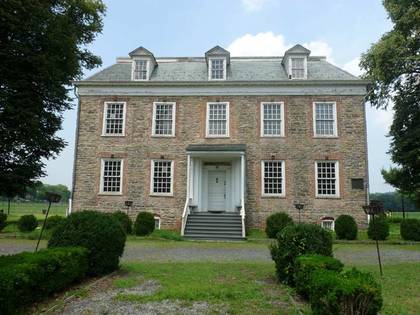 Finally, backtrack down Broadway, keeping to the shade if it’s hot, and soon the venerable Van Cortlandt Mansion will come into view. This Georgian-style country house made in the fieldstone style was built in 1748 for Frederick Van Cortlandt, the scion of the prominent family. The Van Cortlandts had been in New Amsterdam since brewer Oloff immigrated from Holland in the mid-1600s, and had acquired much of the land that was to become the park by the turn of the 18th century. The vast athletic field north of the mansion was at one time the Van Cortlandt farm, and had large planting fields, livestock, and a grist mill. The Van Cortlandts employed slave labor in the colonial period.

George Washington used the Van Cortlandt Mansion as a headquarters during the Revolution (as he had in the Morris-Jumel Mansion in Washington Heights). It is maintained by the National Society of Colonial Dames as a museum appointed with period Colonial and Federal collections.

The Van Cortlandt family granted the house and grounds to New York City in 1889.

You will have worked up quite the appetite after a couple hours hiking. We went straight to the Riverdale Diner a stone’s throw from the West 238th Street station and chowed down heartily before retiring for the day.