Some of my best friends are people. 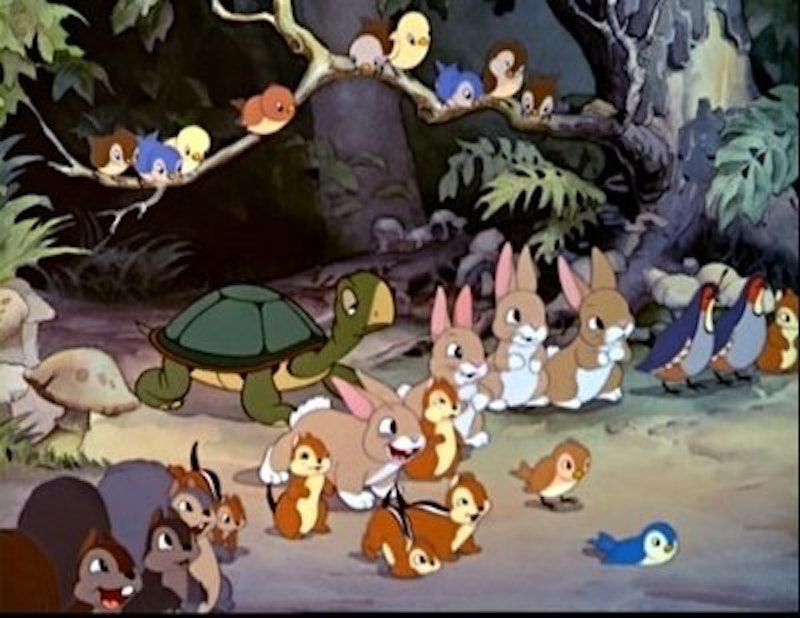 The chipmunks have become bold recently. They creep up within three or four feet of me, tiny heads peering over the cement walkway that leads around front, convinced that their rodentine stealth powers allow them to observe me without risk, like furry little ninjas. Their lack of fear is impressive. I’ve been feeding the rabbits baby carrots and lettuce. They come right up to me. They plop their chubby little asses down right in front of me and demand vegetables now!

The squirrels are smarter, in my estimation. They keep their distance, but they’re curious. The biggest squirrel I’ve ever seen came up within five feet of me last week, stood up on his hind legs, and jiggled his enormous balls at me. I barked like a dog at him and he ran off. The crows have taken over the meadow lately, no doubt because they are an effective deterrent to the hawk. The hawk has been absent. Perhaps that accounts for the confidence of the chipmunks. When the shit hits the fan, I’m either going vegan or cannibal. I’m inclined toward cannibal.

My aunt hangs on, confined to her bed, dwindling away by photons and atoms as she drifts ever nearer the event horizon of death, slowing down as she goes until she becomes still, an infinite fade, in and out of the ER like some handcarved wooden figurine in a Swiss clock, powered by the pacemaker she received at age 92, some seven agonizing years ago.

I saw the future a long time ago, on acid in 1972: it doesn’t work at all. I saw a great war of all against all, like a zombie movie without zombies. Civil War II: house-to-house, block-to-block, not state-to-state. There are no non-combatants. My cousin and I have lively and friendly arguments about the news every morning over coffee. About the only thing we agree on is that nothing works anymore, but it’s amicable. I’ve said it before, and it bears repeating: the first casualty of a civil war is civility. We cease to be Americans when we refuse to agree to disagree. Calling me an anti-Semite and threatening my life and the lives of my cats because I defended the free speech rights of Ernst Zundel had the opposite of its intended effect. You can threaten me all you want, but I do not react well to threats against my loved ones.

I prefer the company of animals. I don’t hate black people, or Jews, or Mexicans, or the perfidious English, or the psychopathic Irish. I hate people. Not all of them, of course. Some of my best friends are people. I’ve lived among people all my life. I haven’t killed anybody yet. There’s nothing wrong with hating people, as long as you’re polite to them. Most of them are just stupid. I’m frustrated by the inability of otherwise intelligent people to distinguish between racism and misanthropy. Am I supposed to think that one race or tribal group is somehow superior to the others? Sorry, I don’t buy that. Individuals vary, but humans in groups are predictably dangerous in many ways. That’s why I rarely drink in bars and avoid crowds of any kind.

I feel privileged to be alive at this time, when so many hidden things are being exposed. I spend my time with my cousin and the animal circus. My aunt is almost a ghost. Every couple of days, I go out for lunch and pick up beer. Sometimes I just drive into the Pine Barrens, or visit one of the nearly vacant malls. The empty malls fascinate me. I have dreams of an abandoned Las Vegas, desiccated and poignant in the light of a wrathful sun, visited by pilgrims who commit suicide from the city’s ruined balconies. I see chipmunks in 1950s space suits. I see crows on the moon, and rabbits under the bed, conspiring. The squirrels rally and chant, and charge across the meadow. A large black butterfly with exquisite blue stripes just landed on my Chromebook. It’s time for everyone to calm down and drop some acid.