The Greatest Show on Earth

I can't be part of America's farce. 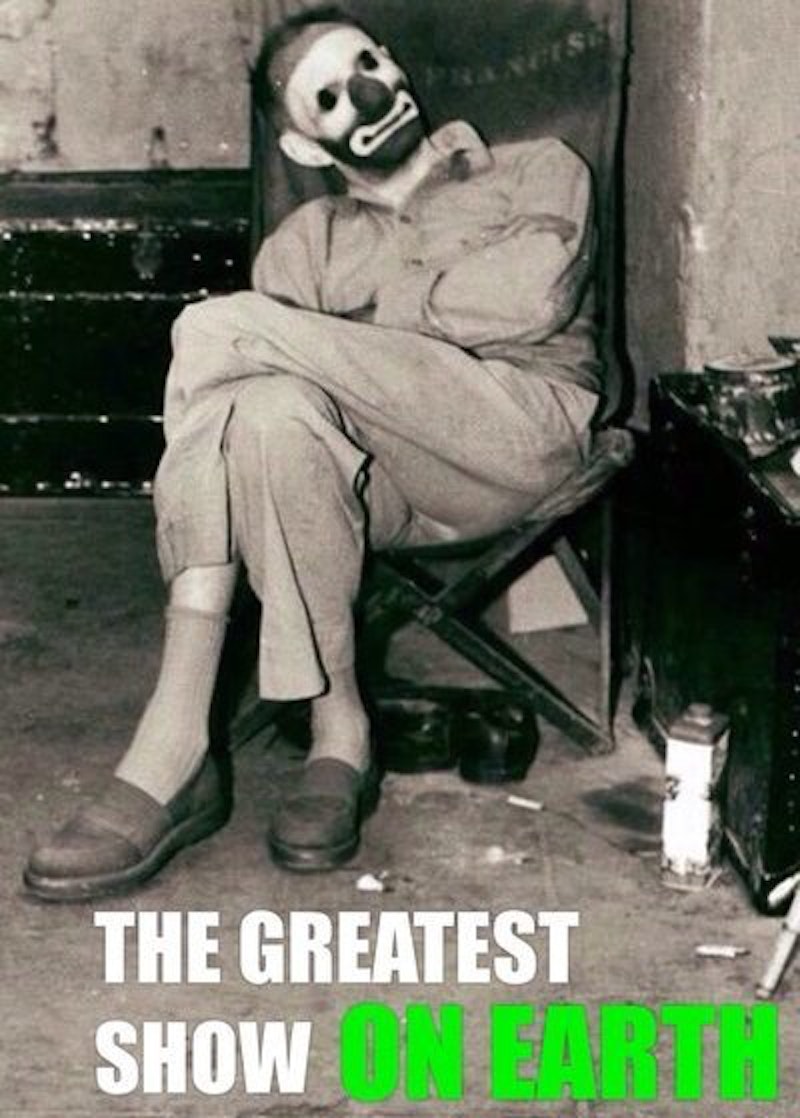 Ladies and gentlemen… children of all ages… prepare yourselves for the most death-defying, hair-raising, spine-tingling, stupendous, shocking, spectacular, and strangest show on earth! I present to you for your entertainment, The United States of America. Nothing less than the greatest show in the known world and the entire universe!

Hold on to your seats, it’s a hell of a ride! Witness everyday average citizens erupt in waves of violence, hatred, anger, and self-righteous indignation. A battle of epic magnitude. See the colorful assortment of clowns, jesters, and damn fools in protests of privilege. You have a front row seat to watch the Comedie Del Arts of political puppets along with the whole crew of gangsters, random terrorists and pundits duking it out in the greatest reality show on earth. Watch unspeakable crimes in a slugfest death match with acts of wanton greed, and endless wars. Listen to the constant blather of fake news noise in the name of truth, justice, and the American way. With daily barrages of bullshit going down locally and across the fruited plain, everybody’s running around like headless chickens, or sticking their heads up their asses to hide from falling skies. Whipped into frenzies of fear, frothing at the mouths, spewing rabid words of mutual annihilation.

Our minds are haywire, spiraling out of control trying to comprehend the shitstorm of hatred, threats, and rumors of half-truths, falsehoods, and psychobabble lies. And that’s just today’s news. The infection is epidemic. Is there a cure? A home remedy or vaccine to inoculate our weary souls? An all-purpose pill to alleviate all symptoms of this virus without a name? Some say prayer’s the answer. Others believe voting is the way to a better life. We see how that’s worked out. God cares about you like the rich care for the poor. Voter fraud, suppression of black voters, registering the names of the dead, and paying drunks on Election Day to vote multiple times does not make your vote count. Religion and politics are the malady of our majority rule disease.

Greater than malaise, ennui, depression, the blues, or any other catchphrase describing the indescribable. We’ve achieved critical mass. The pressure gauge on our boiler is in the red danger zone. It’s going to blow unless we let off a little steam. The ailments have many unwanted side effects. If you think Kate Smith belting out “God Bless America,” or Jimmy Cagney prancing around to Yankee Doodle Dandy is patriotic, check out this last stanza from the lyrics of “America the Beautiful,” written in 1893. The last line was rewritten from the original lyrics in 1904 to “From sea to shining sea” It brings it all into harsh perspective.

That sees beyond the years

God shed his grace on thee

Till nobler men keep once gain

It says a lot without saying much of anything. Thy whiter jubilee? Give us a break. This is one more example of unacceptable white racist tripe we swallow that passes for patriotism. You can change the words to the song but you can’t erase the hate and fear. A love of country, right-or-wrong mystique we’ve put up with too long. Since the first white men came here and stole this land from its rightful people. Effectively wiping them out and creating a slave trade industry to fuel their greed. To influence and dominate with other like-minded dolts using slave labor of black, red, brown, yellow and any other shade that isn’t white. Exploiting ethnic groups and creating wars fought by the poor to benefit a war machine industry and enslave the underprivileged in the corporate prison system. You know what’s going on. If you believe your vote counts, or god will intervene with divine inspiration or Armageddon rapture, it’s your right to believe. It’s my right to choose not to believe. I will not defend your right to the death to believe. You have the right to say and do whatever you love. Do you want to make America again? That’s fine.

Tar and feather those bloated old racist hypocrites who believe they’re entitled. Ride them Nazis out of town backwards on a donkey wearing a dunce hat. Shame on them. Pity the last vestiges of white heritage moaning in the private country clubs, crying at the golf course bars, gated communities and members-only swimming pools of the privileged and the damned. Those men who strip your rights as they take you for a ride and scream vote for me and I’ll set you free. Just say no. Write a letter to your local board of elections. To whom it may concern, please remove me from voter registration. I no longer wish to participate in this farce. Don’t tell us what you’re going to do to make good on your world of condemnation and false promises where rage is all the rage, fascism is the fashion, and violence is in vogue. Let the people decide who will be in the greatest show on earth. When the people have spoken, it’s guaranteed it won’t be what’s going on here right now. That’s what I’ll vote for.