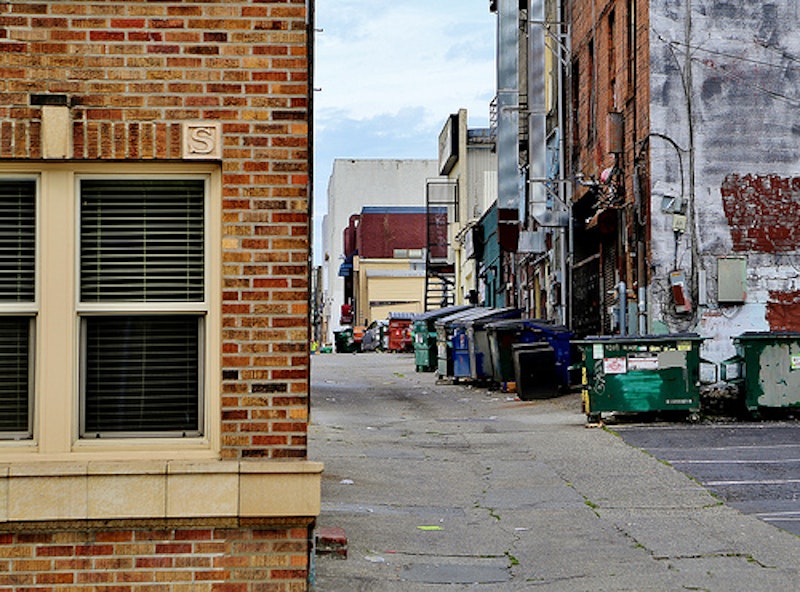 The following report was originally published in the Stamford Leader of Stamford, Connecticut:

At 7:15 p.m. yesterday evening a 34-year-old Greenwich resident named Mark Van Ellin entered Tonetti's Trattoria Italian restaurant near Atlantic Square and began destroying furniture, liquor bottles, glasses, and various interior decorations. The melee lasted for roughly thirty minutes before Stamford police and first responders arrived at the scene soon after recieving a flurry of 911 calls from scared Tonetti's patrons. Some of the emergency calls were from bystanders who came upon the destruction after Mr. Van Ellin hurled a 200-pound banquet table through the front window of the restaurant.

According to Tonetti's owner/manager Alfonse Tonetti, until Mark Van Ellin showed up the evening was a typically slow Tuesday night. About 6 different parties were enjoying dinner when a disheveled, half-naked Van Ellin stormed into the intimate dining room and began yelling. Tonetti described the man as a 6'0" tall, burly Caucasian male with a voice that sounded, "... like t.v. static, like an old transistor radio on the fritz..."

Louise Pries was one of the patrons who witnessed Van Ellin's meltdown. She says it was, "terrifying and very fast. This big almost naked guy dressed in shreds of clothing came out of nowhere. He was very sweaty and had huge bags under his eyes like he'd been up all night. He kept making weird noises, and sometimes he'd gesture wildy at inanimate objects. Right after he'd point or wave at a chair or vase or whatever he'd pick it up and throw it at a wall or punch it."

A police spokesperson said it took only minutes for authorities to gain control of the situation once Van Ellin passed out from exhaustion in a pile of broken glass just as emergency personnel got to the scene. Both police and witnesses also mentioned that, despite breaking pieces of glass and hard wood furniture with his bare hands, feet, and head, Mr. Van Ellin did not seem to sustain any visible injuries. As a precaution, the unconscious Van Ellin was transported to St. Stanislaus Community Health Center for a routine medical examination after which he was taken to an undisclosed mental health facility for further treatment and observation. An anonymous source from within the local police department wouldn't reveal the exact location where Mark Van Ellin is being held, but said he is most likely at an institution in New Canaan or just across the border in New York state.

The friends and family of Mark Van Ellin say that the attack on Tonetti's came as a total surprise, and describe the married father of two as a honest, hardworking, easygoing guy with a dry sense of humor and a passion for custom electronics.

Mr. Van Ellin studied electronic engineering at Wesleyan University in Middletown. After graduating from the school in 2011 he built and opened a recording studio in the basement of his home which was recently used to record local bands and commercial jingles, as well as nationally touring indie music acts like the controversial Maryland group Human Host who had worked with Van Ellin just days before the Tonetti's incident. Members of Human Host had no comment.

So far Mark Van Ellin's friends and family have also refrained from commenting on his condition, his current whereabouts, or any other details of this case.