The Nexus of the Universe

E. Houston St., Manhattan's changer, has been monkeyed with repeatedly since it was first laid out in the early-19th century. 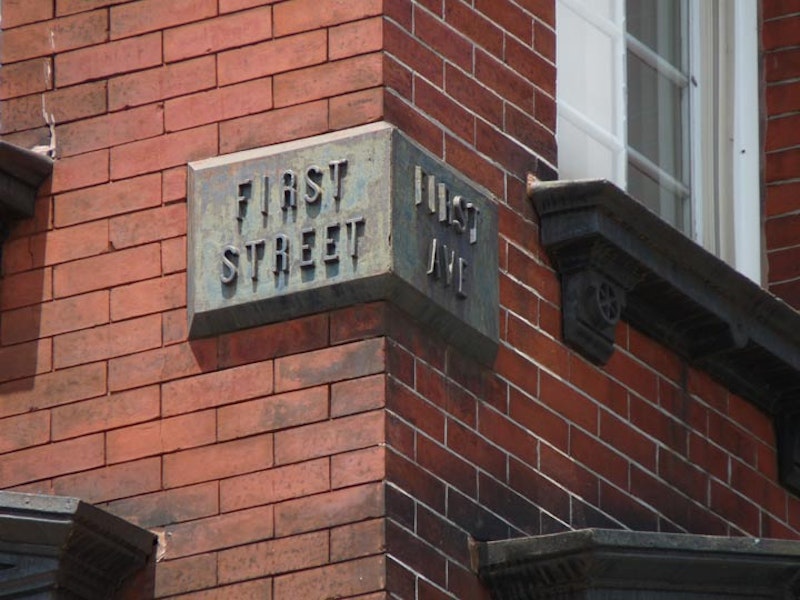 E. Houston St. is the changer in Manhattan, dividing the club of streets with names of southern Manhattan Island from the streets with numbers (and a few letters) on the island north of it. Thus, at E. Houston, Columbia becomes Ave. D; Pitt becomes Ave. C; Clinton becomes Ave. B; Essex, Ave. A; Allen, 1st Ave.; and Chrystie, 2nd Ave. West of that, no numbered avenue gets as far south as Houston except 6th, and it didn’t do so until 1928, as part of IND subway construction, long after the overall grid pattern had been set.

E. Houston St. has been monkeyed with repeatedly since it was first laid out in the early-19th century, though most of that’s happened in the 20th century. Before 1933 or so, it was a narrow two-lane street, comparable in width to Stanton, Rivington and Broome. In the early-1930s, most—though not all—of the buildings on the south side of the street were condemned between Essex and the new 6th Ave. southern extension so that the IND subway—now the F train—could be built more easily. That left Houston with empty lots that were filled with transient structures and shacks until a general street widening, making Houston the roaring thoroughfare it is today, was begun in 1957 and completed in 1961.

Houston doesn’t run parallel to the east-west street grid that it partitions from downtown. Both E. 1st St. and E. 2nd St. run into it before Houston St. itself ends at the FDR Drive. This makes for some unusual parks and triangles. 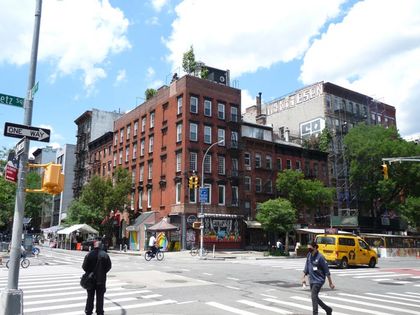 There’s a neat little five-story apartment house on the NW corner of 1 and 1, with 12 over 12 windows and a couple of bars on the ground floor. There’s also a beach house on the roof. I went where I usually go in situations like this, to Nick Carr’s Scouting NY. He has some nice photos of the beach house with its cupola and weathervane, but no idea about how and when it got there. It just joins the many other quirks along or near East Houston, like the scrambled clock and statue of Vladimir Lenin. 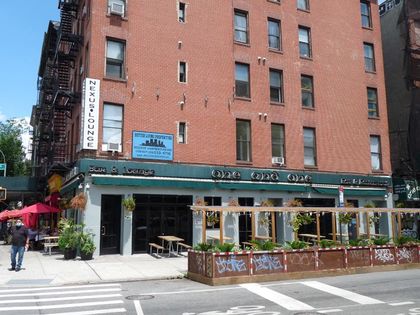 The One and One Tavern, aka the Nexus Lounge, is cleverly named. On a Seinfeld episode, Cosmo Kramer, who rarely ventured outside the Upper West Side except to visit Jerry’s parents in Florida, is lost downtown at 1st and 1st, which he says, “must be the nexus of the universe." 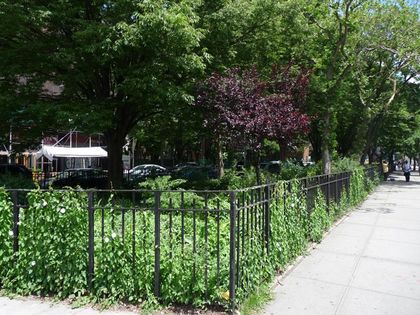 Peretz Square is the narrow green spit east of 1st Ave. filling the triangle as E. 1st St. gradually succumbs to running into E. Houston and ending before it reaches Ave. A. The “square” was named in 1952 for Isaac Loeb Peretz (1851-1915), an attorney, author, essayist and poet born in Poland under Russian rule. He wrote primarily in Yiddish and was known as the “Great Educator” of the Jewish masses. 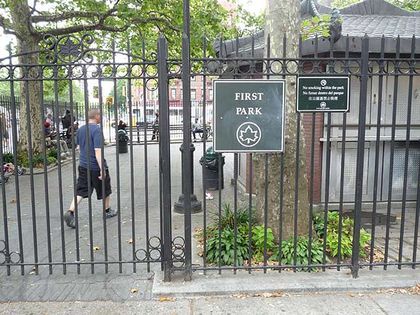 First Park occupies a substantial part of the wedge of land west of 1st Ave. between E. Houston and E. 1st. It first opened in 1935 and was substantially renovated, with a new kiddie playground, in June 1997, when then-NYC Parks Commissioner Henry Stern gave it its present name. Stern, who was fond of quirky or esoteric names, gave it a new, obvious name, after the dominant number in the area. The park has a frequently-changing food concession. 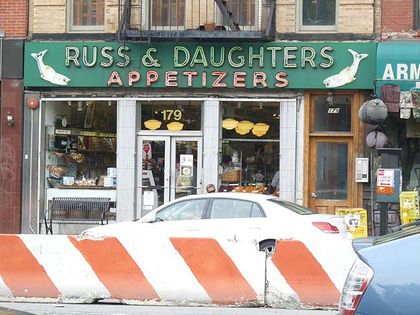 On the south side of Houston, across from Peretz Square, there’s Russ & Daughters deli, in business since 1914 and here since 1920. Joel Russ opened a pickled herring shop on Orchard St. in 1914. According to Historic Restaurants and Shops of New York, Russ had an irascible, argumentative personality, not an asset in the retail biz, so he put his three personable daughters to work behind the counter. The business evolved into a gourmet seafood delicacies emporium, still with a vintage 1940s neon sign. One of the daughters’ grandsons runs the shop now. The neon sign lights up blue, red and green at night. 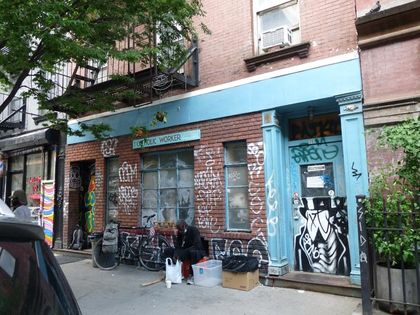 A nondescript brick building at 34-36 E. 1st St. is panted light blue and marked with a sign saying “The Catholic Worker.” Here social activist and convert to the Catholic Church Dorothy Day (1897-1980) initiated the St. Joseph Hospitality Church, a soup kitchen/hostel/office for the publication of The Catholic Worker newspaper in 1967. Day took the paper and Catholic Worker’s operations to nearby 55 E. 3rd in a building known as Maryhouse in the 1970s, but this building still offers a small number of rooms and opens up to area destitute for soup from Tuesday through Friday at 10 a.m. For several years Day resided in southwest Staten Island in a housing project set up by Spanish immigrants in the mid-20th century; it was razed in 2000.