Working in Hollywood as an animal actor in the 1950s was not fun—except when we got pet. 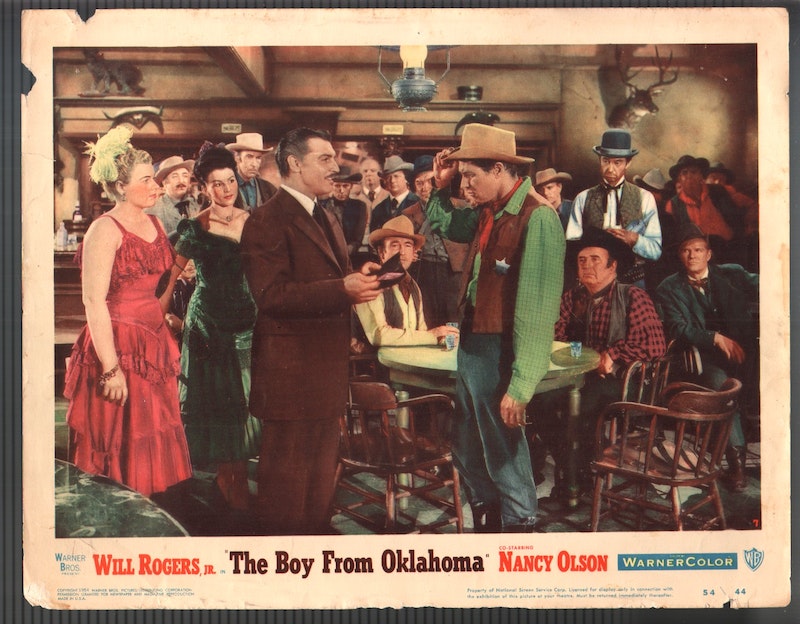 A memory: I’m sitting in my “trailer” (four twigs and some hay), eating an orange, watching the clouds go by over a tireless crew of technicians alternately rushing and milling about the set of The Boy from Oklahoma, starring Will Rogers, Jr. I knew the young man’s father before his tragic death in a plane crash, and everything you’ve heard about him on social media is true: he was a pussy hound. Nicest guy in the world, extremely funny, world class performer, but wow. The appetite was INSANE. He never acted on it though, which was strange, because everyone else around him indulged in all sorts of “inappropriate” behavior that today would be considered criminal.

Obviously we never talked about any of this; that would be rude, but more importantly, kind of a bummer. We also didn’t spend that much time together—really it was just a few days on the set of Judge Priest, and even then he was busy with the material, himself, director John Ford, and me, the most dominating presence on that set, which is probably why I was kicked out. I “stole” one of Ford’s filthy used handkerchiefs, and I honestly thought it was a towel. It was hot, and I dried myself. In his spit. Tobacco dip spit. He wasn’t happy with me and we never worked together again.

That was fine, I hate working with angry alcoholics. So instead I sought work with sober authoritarians, and they didn’t come better than Michael Curtiz. By 1954, he and I were both in our respective grooves: him with hundreds of films, multiple classics including Casablanca, and a personal Oscar; and me, with hundreds of uncredited appearances in programmers and serials that’ve mostly been lost or forgotten by ignorant people like you. Sorry, I shouldn’t assume. Maybe you did notice me. Maybe you thought the cock in Cry Macho is moi. Well, sorry to disappoint. I didn’t take the part. Clint doesn’t pay people enough—at least when they’re animals.

Will Rogers the First may have been a saint, but his son was no fun. Perhaps we got off on the wrong claw. Not everyone likes being introduced with a mud-wing handshake. Where I come from, that’s considered polite. Where Rogers, Jr. came from (a rich Hollywood dynasty of millionaires), I guess it was considered an affront. No matter: the picture co-starred Nancy Olson, a saint of a woman with a fat ass that helped me with my emerging eye problems. I was freaking out, convinced I either had pink eye or a brain tumor, but she picked me up one day and took me to a brook. “Get all the sand out of your eyes, Rooster.” See, this woman was all class: she knew my name. How many movie stars make a point of learning the names of everyone they work with? It’s a short list.

Nancy eased my hypochondria and we went back on set. Mr. Curtiz was berating some ugly Okie for showing up drunk for the scene where he was supposed to play a drunk. “YOUR HEAD IS MADE OF PLATES! DUMB SON OF A BITCH CAN’T SHOOT CALF IN THE BAG!” The maestro’s English was not exactly perfect, nor was his French, Spanish, Italian, or German. I don’t even think his Hungarian was good—and he grew up in Budapest. In any case, Curtiz tried to fire the guy, was told by one of the AD’s that it would be more expensive and time consuming, and soon as he said “time consuming,” Curtiz moved. “OKAY, WE MOVE. WE MAKE DO WITH YOU.” He went to whisper something to one of the other players in the scene, and then got in position to call action.

The scene was only filmed once. The actor, who I won’t name, stumbled into places firing blanks in all the wrong places, and as he was about to harangue the poor old bartender about his slut wife sleeping around, the guy Curtiz whispered to took a real bottle of whiskey and smashed it over the drunk’s head. Blood and whiskey went everywhere, and remember, this film is in color—WarnerColor. It was awful: as soon as he got to the hospital, they told him one of his eyes would have to go. Too much broken glass. Fortunately that turned out to be premature, and he recovered, but not without a huge scar around his temples and forehead. Not the kind of scar that gets you laid, more like the kind of scar that lands you in a freak show, which is exactly where that man ended up. I caught up with him years later and that’s—well, a story for another day.

I have a high tolerance for pain. I don’t mind violence. I don’t like it, but I’ve been around it since I was just a chick. To me, blood and physical pain are a part of daily life. I’d seen many people knocked over the head and even killed before 1954, but this one shook me. I’ll never forget how he fell to the ground face first, completely out. It was the sound of an empty body making its meaty impact on a surface just as lifeless. I was sure he was dead when he fell forward. Naturally Curtiz yelled “CUT, PRINT” and the crew moved onto the next setup. Not me: I was done. But I had to say goodbye to Nancy.

She knew how upset I was. I ran to my trailer and screamed until she came out of her trailer. I begged her to take me in and pet me and rub my feathers and clean my wings and claws. I promised I’d never spur claw anyone ever again and that violence against anyone was wrong, no matter how “justified.” It just wasn’t natural or acceptable. “Oh, Rooster…” Okay, courage… increasing… “Fighting is just a part of life. Whether you’re a drunk getting hit over the head with a bottle, or a woman with a black eye, or a cop with five bullets in his gut, it’s all just part of life. Look at the clouds. They have violence, too.”

I told her I didn’t know what she was talking about and that clouds um, definitely didn’t have feelings or like sentient consciousness or whatever. I got kind of testy, maybe even aggressive—I admit that. But when Nancy threw me out of her trailer, expecting me to FLY, I lost it. Instead of spur clawing her (I’d never spur claw a woman—unless Monica was misbehaving), I empty my cloaca on her wardrobe and went around and told everyone Nancy Olson had the worst diarrhea explosion in the history of American cinema, and that everyone should go look at it and laugh at her, maybe make her cry. I didn’t have time to stay and see the results, but let’s just say her career didn’t exactly reach the place it would’ve had she not endured rumors of “creamy runs.” I can be impolite when I want to; rude, even. And that’s okay, because I’m me. And you’re not. And, frankly? That’s not okay. Do better.