Some scholars claim they were patterns—working models—for American gold pieces. 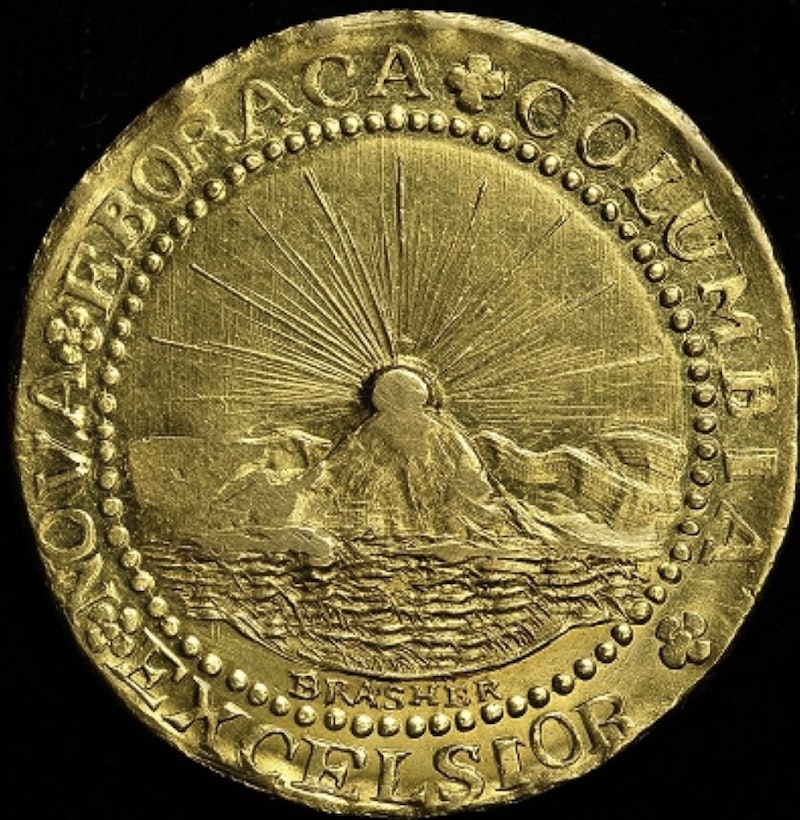 Among the plot elements of Raymond Chandler’s novel The High Window is a stolen coin, a rare gold piece taken from the collection of a dead numismatist: a Brasher doubloon. These coins aren’t fiction. They were struck on Cherry Street in lower Manhattan. Their story reflects the needs of business for stable mediums of exchange and the informality that marked our money before the establishment of the United States Mint in 1792-93.

Lacking the practical power to levy taxes, Congress and the colonies had largely financed the Revolution with oceans of paper money, mostly denominated in pounds, shillings and pence (foreign arms dealers, however, had always demanded and received payment in gold up front). The saying, "Not worth a Continental," referring to the paper money of the Continental Congress, survived into the early-20th century as a folk memory of the worthless inflationary Revolutionary currency.

The situation after the War was chaotic. The colonies’ monies did not circulate at par: One New Hampshire shilling was worth nearly five-and-a-half South Carolina shillings. The little hard coinage in circulation was foreign—odd British, Portuguese, French and Spanish coins. The most common was the Spanish milled dollar. Handsome, well-struck silver coins from the Mexican and South American possessions of the Kings of Spain and of the Indies, they were denominated at eight reales in Spanish money, giving rise to the nickname "pieces of eight." Americans were so short of small coin that they adopted the South American custom of breaking Spanish dollars to make change by cutting them into halves, quarters or eighths. They called the tiny one-eighths bits, a term surviving in the old jingle, "Shave and a haircut, two bits."

None of this foreign coinage was legal tender, i.e., something one was required by law to accept in payment of a debt. Thus, a coin’s value depended on whether a seller would accept it at the time of purchase. Money that can’t be spent is worthless. Hence, the intrinsic value of money—particularly the weight and fineness of a metal coin—meant more than that arbitrarily stamped on it by some government. For example, a horse might sell for either 80 Spanish dollars or $2500 in currency backed by the full faith and credit of the United States, assuming the seller would accept the paper money.

The money problem stemmed from the weak central government established under the Articles of Confederation. When New York became the capital of the United States in January 1785, Congress met in the old City Hall at the corner of Broad and Wall Streets. The executive departments (Foreign Affairs, War and Treasury) operated largely from Fraunces Tavern, which still stands at what are now Pearl and Broad Streets. Whether the government of the United States has improved since it stopped operating from a bar is an open question.

Lacking both funding and authority to establish a mint, Congress had sought to meet the demand for small change by declaring nails legal tender according to weight. This too survives in folk memory. Nails are still classified in terms of pennies by poundage per thousand. (A container of 1000 three-penny nails weighs three pounds.) Private merchants and vendors issued their own small change: advertising tokens in the size of British pennies, halfpennies and farthings, often featuring images George Washington, Indians or even King George III. Some colonies monetized produce: a bushel of corn was legal tender for two shillings in Connecticut and five in New York. And here and there, wampum, the Native-American unit of exchange made from seashells, was acceptable money.

Corn, seashells and nails weren’t enough. In 1787, New York State considered authorizing its own copper coins to meet the demand for small change. Instead of establishing a state mint, however, the legislature sought petitions—today, we’d call this a request for proposals, or RFP—from private contractors for an exclusive franchise to provide the coinage. The profit lay in seignorage—the difference between the coin’s face value and its intrinsic value as metal. The states of Connecticut and New Jersey and the Republic of Vermont had already awarded similar franchises. Numerous contractors, most politically connected, filed petitions with the state. Inexplicably, a few months later the legislature denied them all, instead merely prohibiting the circulation of underweight or counterfeit coins.

One unsuccessful petitioner was Ephraim Brasher. By the late-1780s, Brasher, then in his mid-40s, was a long-established and reputable jeweler, goldsmith, and silversmith. The late Walter Breen, whose reputation as a superb numismatic historian survived his imprisonment for molesting a pre-adolescent boy (one witness quoted him as saying, “But he wasn’t eleven. He was twelve”), devoted considerable research to Brasher’s coinages, even noting that Brasher’s address in 1789-1790 was 5 Cherry Street, next door to President Washington’s residence. Even the President apparently bought silverware from Brasher. Customers frequently asked Brasher to weigh and verify the authenticity of foreign gold coins. He then stamped the coins with his initials in an oval. This mark, because of Brasher’s reputation for honesty, made the coins more certain to pass in trade as having proper weight and fineness.

Apparently the legislature’s denial of Brasher’s petition didn’t inhibit his interest in making money by striking coins. Among others, he was involved in one of the most successful private tokens, the Nova Eborac pennies, so-called because they bore the Latin words for New York. The Nova Eboracs were well-struck, weighty coins, comfortably familiar because they resembled contemporary British and Connecticut pennies. On the obverse is a classical bust in Roman armor with a laurel wreath on its head, looking just like George III. Around the head, however, is the legend NOVA EBORAC instead of GEORGIUS III REX. The reverse bears a seated figure of Liberty, a branch in one hand and a Liberty pole in the other, with a shield leaning against her thigh. Any resemblance to the figure of Britannia on a British penny was purely intentional. In the exergue, the lower margin between the figure and the edge of the coin, is the date 1787. One measure of the coins’ popularity is that they were used: Most surviving examples are heavily worn.

Brasher also minted gold coins in 1787, something that wouldn’t meet the demand for small change. He modeled them after the Spanish doubloons, gold pieces worth 16 milled dollars. Brasher doubloons are about the size of a modern half-dollar. Oddly crude to our eyes, the obverse bears the New York State coat of arms on a shield: the sun in splendor rising in an unclouded sky behind a mountain, with a river in the foreground. Just below the shield is the word BRASHER in small capitals. Around all this is a wreath of oak leaves. Between the wreath and the coin’s smooth, unmilled edge appear NOVA EBORACA, COLUMBIA and New York State’s motto, EXCELSIOR, which means "Ever Upward." On the reverse is anemaciated American heraldic eagle with the shield of Union on its breast, encircled by beading. Outside the beading is an odd miswording of the national motto, UNUM E PLURIBUS, and the date. After striking each coin, Brasher stamped his initials on the reverse. Perhaps this was force of habit: his stamp on a coin was proof that the coin was of the proper weight.

The doubloons remain a mystery. Some scholars claim they were patterns—working models—for American gold pieces. Whatever they may have been, the first one to come to public knowledge was found in a bag of old gold coins bound for a melting pot in 1838, long after Brasher’s death. Seven are now known to have survived, most in permanent collections. However, one went under the hammer in 1979 for $725,000.

One of Congress’ last acts before leaving New York for Washington, DC, was adopting Alexander Hamilton’s refunding plan for the states’ Revolutionary obligations, including their paper money. The new Federal government thus assumed them all at par value, i.e., dollar for dollar. Both historian Charles Beard and novelist Gore Vidal have suggested that Hamilton’s friends had advance knowledge of the refunding plan, permitting them to make millions by quietly purchasing the supposedly worthless paper money for pennies on the dollar. Redeeming it from the government at full face value—a massive transfer of wealth from the taxpayers to the speculators—helped establish America’s first non-agricultural ruling class.