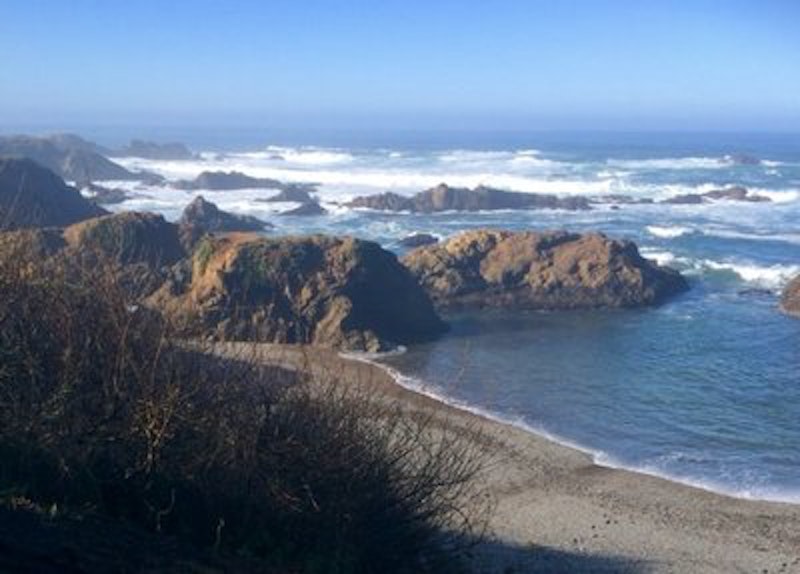 If you’re a sea glass hunter, collector, or enthusiast you’ve probably heard of Fort Bragg, California, home of “Glass Beach,” a place that used to be a trash dump into the ocean but is now a beach made of colorful, smooth glass pieces.

Several beaches around the world are on my list of places to search for sea glass, and Fort Bragg was on it for years. It was a cross-country trip and turned out to be a fun adventure. The trek down to the glass beach involves a pretty dangerous cliff. My fellow travelers and I arrived there at four a.m. wearing head lamps, and as a very clumsy person, I was terrified of falling and was embarrassed to shed a tear or two of joy for both arriving in one piece and discovering how beautiful the beach was under a starry sky.

I collected a small amount of glass during the four-day trip. The beach has been picked over substantially and at first sight, mostly clear, brown and green glass (the most common colors) appears. Only by shifting aside the top layer or the luck of the tide can more rare colors be found, and I did come home with a prescription bottle full of rare colors. So I wasn’t taking five-gallon buckets or filling extra suitcases; I took only enough for a keepsake of the trip. But after posting photos on Instagram and Facebook, I took a little heat in comments: “I hope you just took the one piece…”… “we will soon have no glass left at this rate.” An online article bemoans: “Thanks to people who ignore the rules, Mendocino County's Glass Beach is rapidly fading away.”

Debates rage on in the sea glass community about whether or not it is “legal” to take the glass and whether the glass should be seeded or “replenished” using new broken glass. The local sea glass museum in Fort Bragg sells bags of pre-tumbled “seed glass” to throw into the ocean to help “save the historic beach.”

Curious about the legality of taking glass since I saw no posted signs at the beach, I did a little investigating. I spoke off the record with a ranger from California State Parks who sent me a copy of the law, which reads: “No person shall remove, injure, disfigure, deface, or destroy any object of archaeological, or historical interest or value.” He indicated that although this law could cover sea glass, its enforcement (punishable by up to 90 days in jail or a $1000 fine) is negligible: no rangers are assigned to having beachgoers empty their pockets. Also, the boundaries of MacKerricher State Park are sketchy: there are several beaches that contain sea glass and not all of them are within the boundaries of the park. It did not appear I had not been sea glass hunting in one of the state park designated areas.

In addition, there’s a question as to whether overall international maritime law is in effect. Generally, the “wet beach” area up to the high tide line of any shoreline, which includes all the beaches at Fort Bragg, is not considered “owned” by anyone because it’s part of the ocean. No one owns an ocean.

Since there’s construction going on at the glass beach site and the entire property (part of which appears to be private property) is fenced, trespassing is a more likely punishable offense.

My overall impressions of the mythical sea glass beach in Fort Bragg California are as follows:

I had a blast on my visit to Glass Beach. I probably wouldn’t do it again because I’m too old for that cliff and there just isn’t that much there to find. I don’t feel guilty keeping (not “stealing”) a few treasures. Forget state law: I go back to simple childhood law on this one: finders, keepers.