Observations of people in airports and on airplanes. 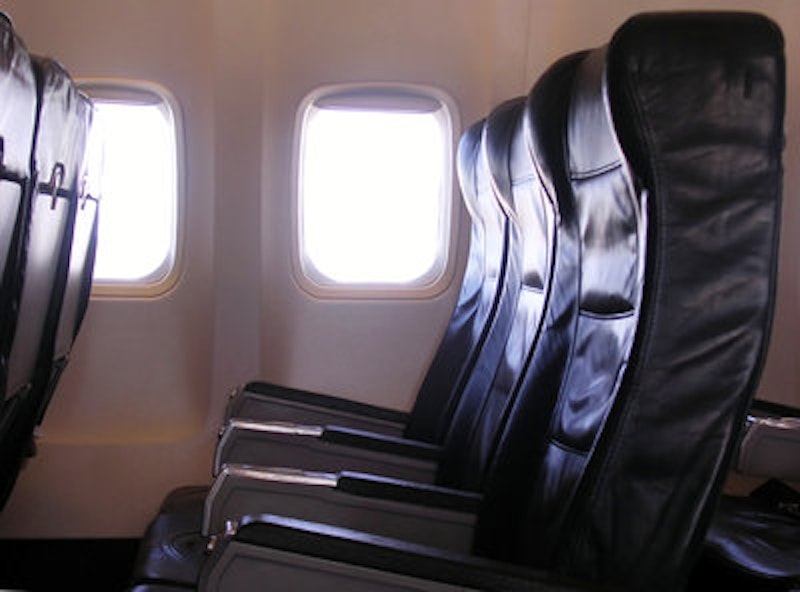 I traveled across the country from Maryland to California on planes this past weekend, with layovers each way, which meant two full days of travel. Here are a few character sketches of people I encountered.

Diane is a business executive of some sort. She’s dressed in a gray and black pantsuit and has short cropped blonde hair. She’s annoyed at the status of the proposal and will have to deal with it when she gets to San Diego. The report is 266 pages and took forever to download. This entire corner of Gate B26 is hers. Please do not disturb her. She ignores evil glares about how much noise she is making with her loud phone voice.

Chad is a douchebag dotcom guy. He also speaks very loudly and is under the impression that he’s very important. He laughs and talks smack about people with his fellow dotcommer. He also ignores evil glares about noise volume from innocent headphone-wearers and book-readers.

This long-haired blonde woman is an antiques dealer. She’s wearing slippers. She’ll sell the yoke she found in her mother’s barn for $200 (down from $250) but is not going down from $325 on the antique washing machine that used to be in her dad’s laundromat because it’s sentimental. The yoke is not personal. Fine, both for $400 but her husband is going to kill her. (She doesn’t get evil glares because she keeps motioning apologetically toward her phone and rolling her eyes; she can’t get these people to stop calling!)

This baby is whining, borderline crying. People glance at the baby and mentally calculate how far on the plane they will be sitting from it; no one should have to sit next to a crying baby for four hours over the flyover states.

That married couple is not happy. He is handsomer than she is pretty and she suspects him of cheating, based on her sneaky glances at his phone and laptop. She touches him a lot; she is insecure. He does not respond.

This woman is annoying at 4:30 a.m. and therefore probably even more so during daylight hours. Her purple sweater matches her purple “carry-on” suitcase that won't fit in the overhead bin and will end up being dragged awkwardly down the aisle, bumping everyone until she reaches the last window seat, and then will still require being checked.

There is a motherfucking cat on this plane. The flight attendant just made an announcement asking the owner of this cat to please locate and constrain the cat. At first everyone thinks he must be kidding, but then a small white and gray kitten, to the amazement of the full airplane, walks nervously down the aisle, eventually being picked up by a uniformed Southwest employee. No one claims ownership of the cat; passengers discuss how it got through security and whether anyone on the plane has a cat allergy.

These guys are a BAND. They don’t understand why it’s so much of a hassle to check in five huge oversized musical instrument boxes. They look around because they expect people to recognize them but no one does. They’re shipping a case of wine and are pretty sure it won't break because that lady really packed it well so it should be okay unless someone throws one of the instruments on top of it.

This guy seemed to be the quiet type when asked about the window seat, but actually will speak for several hours straight. He’s a doctor and his wife left him. One day he saw her phone light up and it said “Pharmacy 1” so he picked it up because she was in the shower and he thought she might need to take the call. It was pornographic images from her boyfriend. She moved out and lives with the boyfriend. Their kids don’t like mom’s boyfriend but they like his new wife. Well, it’s not really his wife yet because the divorce isn’t finalized since “the adulteress” is trying to get more money. Lawyers, money, custody, visitation blah blah blah—he talks for hours on end about the first wife and says maybe two words about the new fake one.