Hell Is an Airport at Two in the Morning

God help us all. 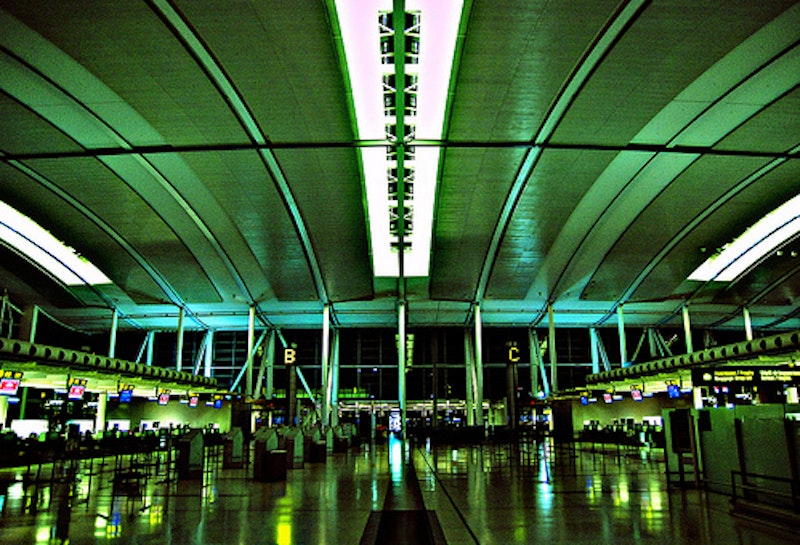 I flew back from a business meeting in Denver and got stuck in Sea-Tac airport Friday night into Saturday morning. First, my flight was delayed and I missed my connection. Then, the fog rolled in thick. The last flight of the night was held up. If it did take off and couldn't land in Bellingham, very close to Canada, then it wouldn't be able to land back here either, we were told. That would ex out Vancouver airport as well. If we took off, there was a good chance we'd wind up in Portland, Oregon for the night.

Alaska Airlines finally canceled it just shy of 11:30. I called the airport shuttle bus company to get on the last trip to my own Whatcom County. They took my credit card number and told me to run for it. The bus took off without me. Then the workers for Alaska in the baggage claim area said, and I'm paraphrasing but this is the gist of it, “Oh, you didn't re-book a flight in the terminal? We sure can't do that for you here. Hit up the ticket counter when it opens at 3:45 a.m., sucker!”

It mightn't have done much good anyway. A lady in the baggage line had been scheduled for the same flight. Alaska re-booked her for late Saturday night. That was doing her no favors. She was stuck for lodging that night and on another flight that was very likely to get canceled by this season's abnormal pea soup.

A sane person would’ve called it a night at that point, gone to a hotel, sorted it out in the morning. But sanity is not the right word for where I was at that point. Denver's dryness and the recycled in-flight air had mucked up my chest and head. Middle seat stress-position sitting aggravated the bad knee. Adrenaline from the mad search for some way to get home turned the legs into throbbing Jello.

I found an airport chair, sat down hard, eventually cracked the laptop. The airport shuttle that had already chiseled $37 out of me still looked like the best bet. Bus out of Sea-Tac at six in the morning, in Bellingham by 8:30. No trip canceled on account of fog. As long as you booked the ride at least five hours in advance, the site said, you should be good. Rather than give me a confirmation number for the driver, the amateurish page said an email would be along “WITHIN 12 HOURS” or, possibly, well after the bus had taken off. Thus kicking off the whole vicious cycle again.

Mucus in my chest tried to hack its way onto the airport's polished concrete floor in protest. Deep breaths turned into wheezes and the wheezes were a real puzzle. They sounded violent, out-of-body and, somehow, childlike. Finally, I turned around to see an infant in a stroller who’d also been wheezing, more or less in rhythm with my own efforts. Poor little guy. And poor mom. And poor guy trying to catch some shut-eye on the hard floor over there in the corner. Poor anyone stuck at the airport at that hour.

Just shy of two o'clock, hunger pangs made the vending machines—the only source of sustenance in the building until the shops opened later—seem like a really good idea. An awkward, talkative Asian teen was hovering about the machines, looking hungry. He asked me some questions about airport security, and then told me about the bums he'd observed sleeping in the airport some nights. He said his mom had kicked him out of the house. He'd spent the last few weeks staying where he could at nights: friends' houses, on buses, at the airport.

It's possible this was a sob story to con money, yet it seemed more like the kid was just bored and tired and hungry and wanted to bend the ear of somebody who’d acknowledge his presence. Wish I could report that I stuck around to hear him out, or that I slipped him a $20 or even told him “Jesus loves you.” But it took every bit of restraint I had just to not bite his head off. I did give him half of the chocolate covered donuts that I got out the machine, and he perked up. It wasn't much, but at that hour it was about all that I had to give.