The House that Housewives Built

The women are cast precisely for their innate ability to generate drama and make spectacles of themselves at every turn. 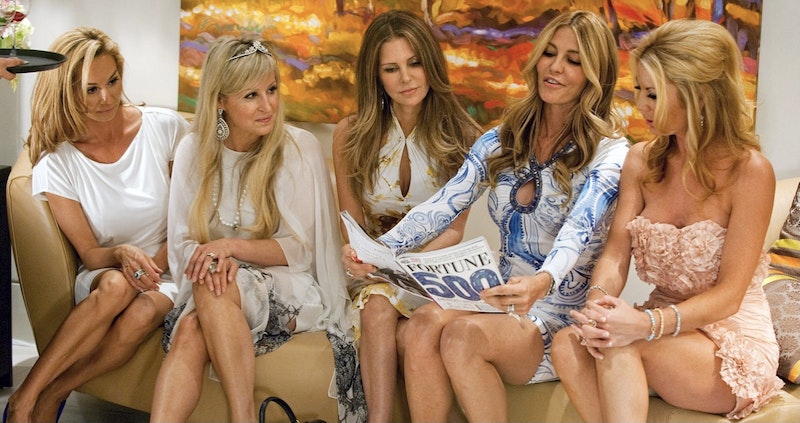 A century from now, cultural anthropologists will look back on Bravo’s Real Housewives franchise as a crucial document of American life in the early- 21st century. Originally conceived in 2006 as a cinéma vérité amalgam of Desperate Housewives, The O.C., and Curb Your Enthusiasm, 15 years later the franchise has come to embody the apotheosis of reality television—and, as a new book argues, a paragon of contemporary popular culture.

Across its many domestic and international iterations, Real Housewives is recognized among reality TV fans as a shining example of the genre; this is reality TV at its most high-end, cherished, and enduring. Along the way, we’ve seen the matrons of Bravo live through such seismic historical events as the 2008 financial crisis, the election of Donald Trump, and most recently, the tedious dynamics of social life in a pandemic.

The franchise is entering its 15th year and is ripe for a serious retrospective. Brian Moylan’s The Housewives: The Real Story Behind The Real Housewives aims to deliver exactly that. In doing so, the book offers an account that is just as much a celebration of the show’s inimitable pleasures as it is a rich historical account of this unlikely media phenomenon.

This dual purpose of Moylan’s book is what makes it a compelling read. The joy resides in its marriage of two typically contradictory styles. The book is impressively researched, journalistically even, and the writing is mainly clear and detailed. Simultaneously, Moylan harnesses the gossipy, euphoric energy that has always been the lifeblood of Real Housewives and its cult-like fanbase. Moylan gathers reams of information on the show’s internal workings and history, and then organizes it into an accessible frame. Until now, this is information that one otherwise would’ve had to piece together across myriad podcast episodes, Radar Online articles, and Bravo blogs. In this, devotees of the show are in for a treat: a fun and densely informative treatment of a cultural institution that, despite its success and longevity, has long been the object of ridicule and condescension by the official intelligentsia.

In chronicling the show’s conception, its rise, and the nitty-gritty of its contemporary production, Moylan delights in serial anecdotes, many of which were whispered to him by dozens of editors and producers who could speak only anonymously. The historical arc he traces is fascinating in isolating the show’s creative DNA and also as a proxy for the turn-of-the-century transformation of popular culture more generally.

Moylan tells the whole Bravo story, from its inception as an internally contradictory subscription channel in the 1980s (showing opera and ballet twice a week and porn the rest of the time), and follows the network through the arthouse boom of the late-1990s, and finally to its foray into reality television by way of experimental documentary filmmaking. Though Andy Cohen is still widely considered the mastermind of the franchise, Moylan explains how it was actually Lauren Zalaznick, a ruthless semiotics major from Brown University, who established the show’s core elements, including its aesthetic sensibility and its intelligent sense of irony.

The juicy heart of the book is found in its fifth chapter, titled “The Only Thing Artificial About Me Is This: Producing the Housewives.” Though it’s a running theme throughout, this is the chapter that addresses head-on the central question of reality television as a genre: just how “real” is it? Smartly, Moylan begins by framing the question properly.

“The real $100,000 question isn’t whether or not the shows are real. There is a level of documentary that can’t be made up—marriages, divorces, rehab, lawsuits, ill-advised music careers. However they play out, these are real events happening in the lives of real women. I think the $100,000 question is: How produced are these shows? When lives get turned into story lines, how much of it is reality, how much is for the camera, and how much is it manipulated in post?”

Here, Moylan is aware of the distinction between questions of material reality—the bare existence of objects and facts—and matters of social reality, which concern the matrix of beliefs, symbolic behaviors, and practical expectations that we depend on to inhabit the same world of meaning as one another. Whereas material reality poses a straightforward scientific question, social reality forms only according to shared social processes. The title of my own book on reality television, Reality Squared, is an allusion to that process, and interprets reality television as both an aesthetic form for representing social reality as well as a metaphor for the way social reality is constructed in the first place, through narrative, performance, and symbolism.

Moylan’s findings are not likely to burst any bubbles. The book goes into terrific detail about how the women are cast, how their storylines are developed, and how the show is edited, but in the end his conclusion is reassuring enough: it’s all pretty much real, especially when judged by the standards of the genre.

But one can’t forget that cast members and producers alike are in the business of making an entertaining show—and more generally, the art of turning a buck. This is already clear to any watcher of these shows. The women are cast precisely for their innate ability to generate drama and make spectacles of themselves at every turn (to “bring it,” as fans say), and to do so without being asked. For producers, it becomes more about managing egos, juggling production logistics, and striking lucrative deals, than anything so pedestrian as inventing characters or storylines out of whole cloth.

And yet, the precise nature of the produced elements do remain an object of fascination. Moylan tells an anecdote that's illustrative of what’s so useful about this exploration. During a question-and-answer session at BravoCon, the 2019 fan convention, producers were asked who pays for the Housewives’ lavish trips. When the producers seemed to equivocate, the crowd booed. Eventually, the producers revealed the truth that everyone already knew: Bravo pays for the trips. Obviously. And yet the crowd went wild.

The point seems trivial, but its underlying significance is crucial to understanding how reality TV is consumed and felt by its audience. At this stage of the genre’s development, fans of reality television will no longer stand to have their intelligence insulted. They know that it’s a show; that it’s all about money, spectacle, and generating drama. That’s why they watch. But that doesn’t make them passive consumers of manipulative nonsense. On the contrary, reality television watchers tend to be the opposite: highly engaged, critical aficionados who are just as interested in form as in content.

The essence of reality television resides not only in the concealment of seams, but also in their subtle acknowledgement. The interpenetration of production methods with onscreen narrative is what elevates docu-soap above soap opera. As the French psychoanalyst Jacques Lacan argued, it’s those notfooled and taken in by the illusions and empty gestures of social reality who are mistaken. Likewise, fans of Real Housewives are knowingly enchanted with production magic, each one of them a sorcerer’s apprentice of sorts. Those who dismiss the show for being “staged” and “fake” are the ones missing out on the true nature of reality television as a properly postmodern art form.

Moylan’s book arrives as a thoroughly worthwhile contribution to the growing popular literature on reality television. It delights in the sub-rosa minutia and back-channel gossip that makes reality television such a unique, contemporary form of narrative pleasure. Not all of it’s pretty and not all of it’s nice. But anyone interested in the production of reality—both the television genre and the social construct—will find themselves comfortably at home in the house that The Housewives built.

—Tom Syverson is a writer living in Brooklyn. His first book, Reality Squared: On Reality TV and Left Politics, is out now from Zer0 Books. Check out the book here. Tom can be reached on Twitter @syvology.