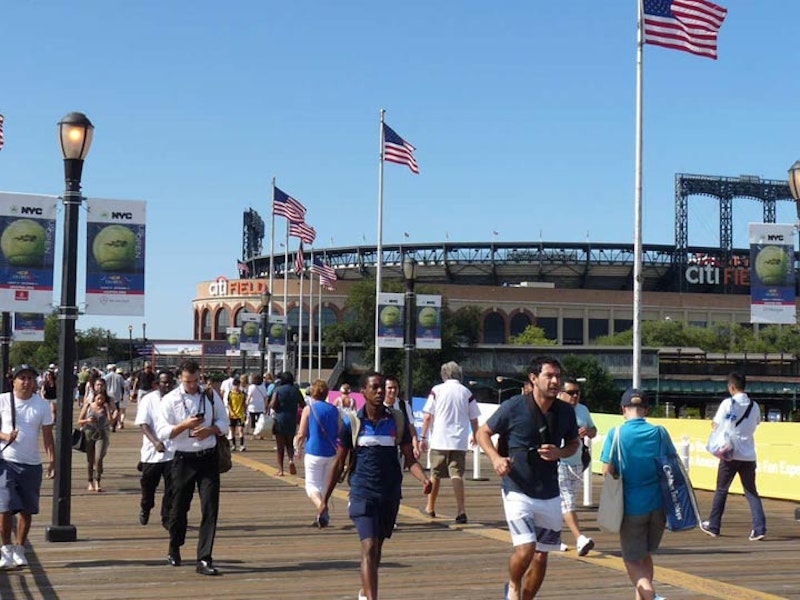 With crowds supposed to return to the United States Open tennis tournament at Arthur Ashe Stadium in August, and the New York Mets’ ascension into first place despite not hitting a lick, Flushing Meadows-Corona Park finds itself at the center of New York City’s professional sports life as summer 2021 commences. Let’s take a look at some of these venues as well as the park itself. 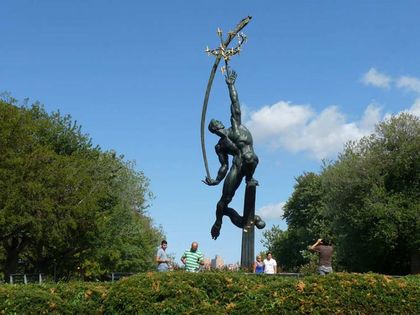 Flushing Meadows-Corona Park was created in 1939, when New York City’s first World’s Fair was constructed in the large expanse south of Flushing Bay formerly home to ash heaps and garbage dumps that was memorialized in F. Scott Fitzgerald’s 1925 novel The Great Gatsby. A second World’s Fair was held 25 years later from 1964-65.

The present-day park features several leftover elements from both World’s Fairs. Rocket Thrower, shown above, is one of two works by Boston Sculptor Donald De Lue in the park (the other is a statue of George Washington in his role as the First Master of the Alexandria, Virginia, Masonic lodge).

Rocket Thrower depicts a giant throwing a rocket held in his left hand through a network of stars in his right. Space travel was a frequent theme in the 1963-64 Fair’s exhibits, as America’s efforts in space travel were increasing in scope. 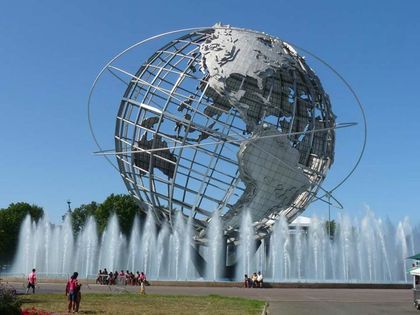 The Unisphere was the centerpiece of the 1964-65 Fair and remains the focal point of Flushing Meadows-Corona Park today. This 140-foot-by-120-foot, 700,000-pound behemoth has become Queens’ symbol in the four decades it has been in Flushing Meadows. This surprising and impressive sight rises above the trees and buildings like a second moon when you are in the surrounding park and nearby neighborhoods of Corona and Queensboro Hill.

According to many accounts, its rings represent the orbits of the first American astronaut, the first Russian cosmonaut and the first communications satellite (Telstar) to orbit the Earth, while other accounts relate they merely represent the paths of three USA communication satellites. It was an engineering feat to make the Unisphere stay in place, because the sphere’s Pacific Ocean is much lighter than the section showing Africa, Asia and Europe. The Unisphere tilts at the same approximate 23.5-degree angle the Earth does as it orbits the sun.

The Unisphere was designed by landscape architect Gilmore D. Clarke with steel donated by the U.S. Steel Corporation. It was built on the structural foundation that hosted the symbols of the 1939-40 Fair, the Trylon and Perisphere. 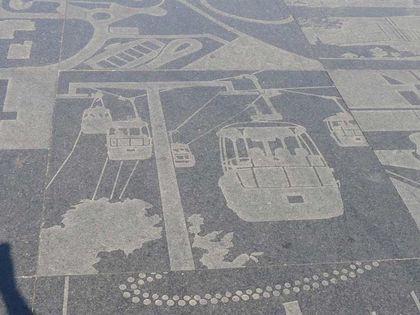 One unusual feature not mentioned in World’s Fair accounts is the sidewalk inlay adjacent to the Unisphere depicting scenes from both Fairs, which was added a couple of decades after the 1964-65 Fair closed. This panel depicts the Swiss Sky Ride, in which cabins accommodating four passengers were transported between the Korean and Swiss pavilions on cables over 100 feet high—high enough for riders to see the Manhattan skyline. 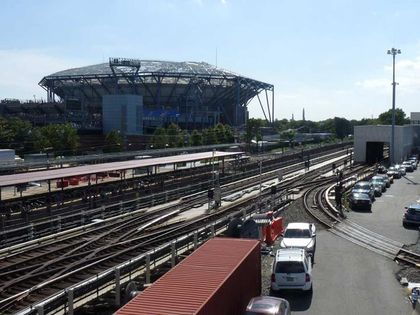 Since 1964, Flushing Meadows has been home to a series of sports venues including the Singer Bowl (since renamed Louis Armstrong Stadium and now part of the Billie Jean King National Tennis Center along with Arthur Ashe Stadium), and Shea Stadium, now replaced by Citi Field. Arthur Ashe Stadium (centerpiece of the Tennis Center), which opened in 1997, is seen beyond the Corona Yard and Long Island Rail Road tracks. It is the world’s largest stadium built to accommodate tennis, with a seating capacity of over 22,000. The stadium is named for the three-time tennis grand slam champion Arthur Ashe, who captured the U.S. Open title in 1968, the Australian Open in 1970 and the Wimbledon championship in 1975, the first African-American male to achieve each championship. In late 2015, a retractable roof was added that eliminated the need for postponements due to rain.

The Corona Yard was constructed in 1928 to service Interborough Rapid Transit cars in use on the 7 train, which was extended to the Flushing Main Street station that year. 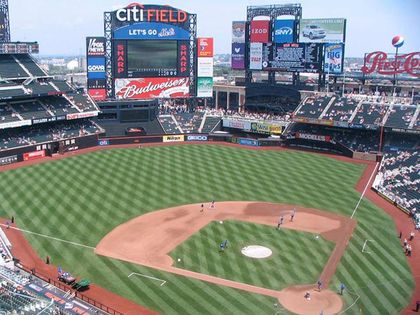 Citi Field is the third stadium the Mets have played in since the team’s inception in 1962, following the Polo Grounds (1962-63) and Shea Stadium (1964-2008). Citi Field was built for over $600 million and was in New York City’s bid for the 2012 Olympic Games; the initial Mets home game was held there on April 13, 2009. Among the stadium’s highlights are the Shea Bridge, a pedestrian crossover named for Shea Stadium located behind the right-center-field fence; the Jackie Robinson Rotunda at the stadium’s main entrance; a Mets Hall of Fame and Museum; numerous food courts, the most popular of which features a Shake Shack franchise; and a new version of Shea’s Home Run Apple, in which a giant apple with a Mets logo rises out of a top hat after a Mets home run, an updated version of a Shea feature.

Flushing Meadows-Corona Park, Arthur Ashe Stadium and Citi Field are best reached by the 7 train to the Willets Point station, and the Long Island Rail Road has a stop here during scheduled events. The park and its stadiums are also easily reached by the Grand Central Parkway and the Van Wyck and Whitestone Expressways.