How the "Streisand effect" can work in the world of comedy. 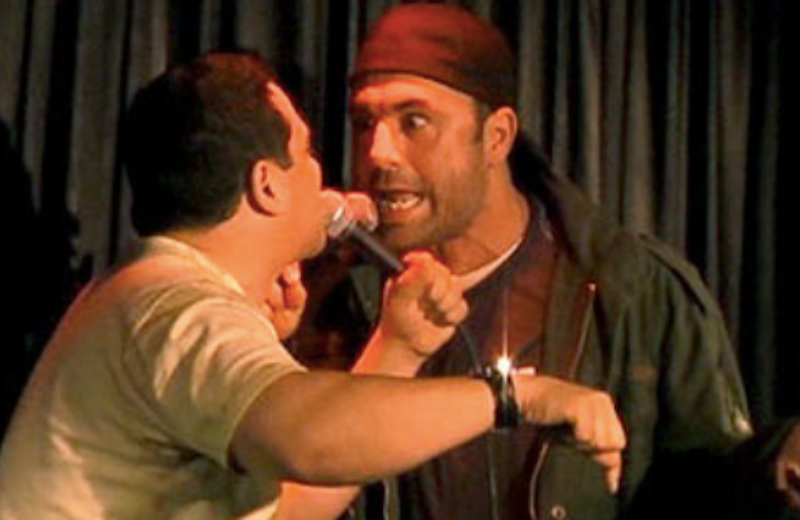 Among the more memorable confrontations in the history of stand-up comedy was when Joe Rogan and Carlos Mencia went at it in 2007 at L.A.'s Comedy Store. Mencia, a well-known comic at the time with his own show—Mind of Mencia—on Comedy Central, thought he'd embarrass the less successful Rogan, but the upstart turned the tables on him. Thirteen years later, Rogan's just signed a $100 million deal with Spotify, and people say "Who?" when Mencia's name comes up.

Mencia didn't do himself any favors shortly thereafter when he appeared on a San Diego radio show—the "Mikey Show"—in an attempt to do damage control. Mikey, the host, was sympathetic to him at first, but that didn't last. When Mencia hung up the phone, Mikey said he'd never have him back. Mencia had mentioned a new bit he'd been doing, the "Stereotype Olympics," and Mikey recognized it as something he'd already heard on another radio show out of Miami. Mencia would lose his Comedy Central show the next year.

Discussing the incident later on, Rogan said he could see the confidence in Mencia's eyes. But it was false confidence. Perhaps his success had given him a sense of invulnerability that evening which then carried over to his doomed chat with Mikey. After the onstage confrontation, Rogan's agent, who also represented Mencia, called him and told him he had to apologize, which he knew wouldn’t happen. Rogan refused and that was the end of the relationship. The Comedy Store also banned Rogan. He wouldn't do another show there for seven years. Having a cable TV show allows you to throw your weight around, at least until the dust settles.

Carlos Mencia was accused of stealing jokes for years before things came to a head in West Hollywood at the Comedy Store. Contrary to what many believe, it was Mencia who interrupted Rogan's set, not vice versa. When Mencia took the stage, someone in the audience yelled, "Who are you? He responded, "I'm someone important enough that he has to end the show by saying 'Carlos Menstealia.'" If someone steals a riff from a song," replied Rogan, "that shit's in the news constantly." The rest of the interaction went like this:

Rogan: "Motherfucker steals and they put it on HBO."

Mencia: "They say you're acting like a little bitch."

Rogan: "They're agreeing with me, motherfucker."

Mencia: "They don't even know what the fuck I do. I could say you steal shit."

Mencia: "I think every time you open your mouth about me you're secretly in love with me."

Mencia's attack was weak; he wasn't prepared to battle Rogan. Crowing about his importance tipped his hand as to how he viewed the power differential in this showdown; claiming that Rogan was in love with him was a bad attempt to deflect, but he had no other real options. Rogan talking about how an author or a songwriter stealing another artist's words would be big news opened up an interesting topic. Music fans know about instances of famous artists losing plagiarism lawsuits to other artists for stealing a riff or a melody. George Harrison, for example, lost a copyright infringement lawsuit for "unconsciously" (as he put it) nicking a riff from The Chiffons' "He's So Fine" for his song, "My Sweet Lord." Comedians, however, have always enjoyed more leeway in "borrowing" the material of their fellow comics. Words written on a page are no more or less than that to a reader, but a joke's impact has much to do with who's telling it. If one comedian's delivery (body language, timing, etc.) is funnier than another's, comedy audiences tend not to obsess over who wrote the joke. To the comedians who write the jokes, on the other hand, the issue's of great importance. It takes a tremendous amount of work to put together 45 minutes of original material for a comedy set. Watching a lazy comedian piggyback off of that effort enrages them.

There's a long history of joke-stealing in the comedy world. Milton Berle, known as "The Thief of Bad Gag" among his detractors, was a notorious joke bandit. Fellow comedian Bob Hope said that "Uncle Miltie" "never heard a joke he didn't steal." But those were different times; Berle was able to laugh the issue off. He even made it part of his typical banter when he was with another comedian, and when he talked about it while performing he'd pretend to be insulted by the accusations. Berle once told Larry King, "I don't steal people's jokes. I just find them before they're lost." Other comics who've been accused of lifting their colleagues' material include Dane Cook, Robin Williams, Jay Leno, Conan O'Brien and Denis Leary, who was accused of appropriating Bill Hicks' entire stage persona along with some of his bits. Try to imagine that many top authors being accused of plagiarism.

Back in Berle's time, there was no Internet, so people were able to get away with theft. The Rogan vs. Mencia video, however, went viral, with lot of help from Rogan, which the Comedy Store didn't appreciate. That was a major contributor to Mencia's subsequent fall from grace. Moreover, Berle's comic era was one in which there were a relatively small number of famous comedians who saw no particular benefit in tearing down one of their own. Instead, they preferred to joke about it in a clubby way, at least when they were in public. They were all doing well, so why rock the boat? Today there are a bunch of comics with Netflix specials who the general public has never heard of. The competition's cutthroat to get one of those specials, so comics aren't particularly forgiving when it comes to plagiarism.

Mencia was never a beloved figure like Berle. He had a bad rap within the comedy community for years, and met the charges of plagiarism with arrogance. Comedians can still get away with "repurposing" material, but they need to take the proper approach. Comedians don't have the legal protections afforded novelists and songwriters. Instead, social norms come into play. In denying what was true, Mencia left himself open to the enforcement of those social norms. The short-term path to success for him turned out to be the long-term path to ruin.

Mencia made himself the victim of the "Steisand effect," which happens when you try to shut down the flow of information and inadvertently increase the flow of information. Lawyers often tell their clients who want to sue someone not to do it for this very reason. Any smart attorney would’ve told Mencia to bite his tongue that evening. The comedian won't admit it, but he probably knows it's true.