Tribulations of the Lottery Groundhog

The groundhog and the people he brought around were another class of pest altogether. 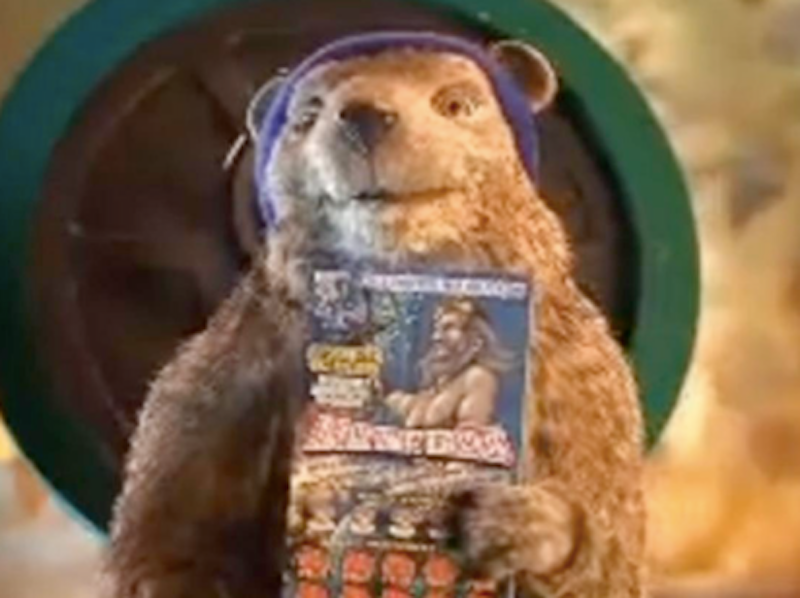 It was a chilly November morning in Pittsburgh. On the set of the lottery commercial the groundhog wore the same cheerfully blank expression as always. In between takes he browbeat his stoic assistant, Meme, for allowing the light rain to turn into an icy film on the tips of his fur, barking, “I just got it dyed, so can we have a little concern, here?”

Meme took the prolonged tirade as she used a sturdy brush to sweep away the hardening droplets. “Maybe bring a poncho to throw on next time,” she said. The groundhog scowled and blinked slowly, pausing with his eyes closed, then rearranged his face into a mask of impassivity.

The groundhog, who for marketing purposes went by Gus, was to be the co-star of the new ad with Westsylvania Senator Eddy Nakhoi. The script was mostly banter so mundane and predictable that it might as well have been written more cheaply using white-collar prison labor, but the groundhog had insisted on a “real” writing team.

Nakoi wore Bermuda shorts and a Hawaiian shirt, looked like a slightly taller version of the groundhog with his bushy eyebrows, sloping forehead and a toupé that didn’t quite match the gulf of brown hair that remained on the sides and back of his head. The gimmick of the commercial was that Gus wore the same getup. They both ostentatiously shivered while playing lotto tickets until the groundhog delivered his unfunny catchphrase—“Keep on scratchin’!”—and blinked directly into the eye of the camera.

“You cretins’d better not mess that up in the final edit,” he said as soon as it was over. Nakhoi grinned but said nothing.

Meme broke the silence. “I’m starving,” she said, letting more mint julep out of her lungs into the cold, wet air. “Can we go get some pizza?”

Tony Mercuri could feel the trio slouching toward his shop beginning a few minutes before they arrived. It was the same implacable premonition in his bowels he used to get when his dad owned the place and he worked the register. Back then, aspiring mobsters who ran the local numbers racket would drop by to talk business. But at least with those guys it was easy to tell what they wanted—some protection money and shows of deference. The groundhog and the people he brought around were another class of pest altogether. Tony kept sacks of cedar shavings around because Gus would demand them on half of each pizza he ordered.

So it was no surprise when the varmint strode in. Of course he brought his familiar, Mercuri thought when he saw Meme. After them came Nakhoi, who stood with Meme a little back when the groundhog stood at the lunch counter, which was right below eye level for him.

Mercuri did his best not to sound anxious, but it wasn’t convincing. “Gustavo!” he half-croaked, half-burped. “E bellissima Meme... E Senatore!” The groundhog gazed as though through a periscope, closed his eyes for a second, standing just inches from the counter. “Half cedar shavings and half anchovies would be fine,” he said.

“Hold on,” sputtered Nakhoi, who’d recently run a campaign that emphasized his love of “culture.” In practice it meant a bunch of photo-ops at “ethnic” restaurants. “If there’s two types of food I can’t stand, it’s dago and woodchuck. A large plain pie for me.”

Meme blew out a slow stream of smoke.

The groundhog maintained eye contact during another slow blink that made Tony nervous. In his mind, that particular gesture—that he’d be able to leave a van out back, that Tony buy certain types of cold cuts, that Tony comp a child’s birthday party at the same time one of the groundhog’s political allies, of whom Nakhoi was only among the more prominent, just happened to use the restaurant for a “media availability.” Tony’s nostalgia for the simple extortion that his father had taught him to deal with grew when he saw Gus had tipped him in lottery scratch-offs.

By the time Meme had come back from moving the van—the groundhog had insisted she park illegally because his stumpy legs were too “worn down” for her to park farther away in a regular spot—he and Nakhoi had sat down at a booth right by the door. From the way they pretended not to change the subject, she could tell they’d been talking about something she wasn’t supposed to know.

Neither he nor Nakhoi had watched a full NFL game in his life. “What a pretty boy,” said the senator. He mechanically patted his hairpiece.

Meme inhaled more smoke from the vape pen she held in her right hand as the left grabbed a slice of anchovy.