The Good Life in the Parking Lot 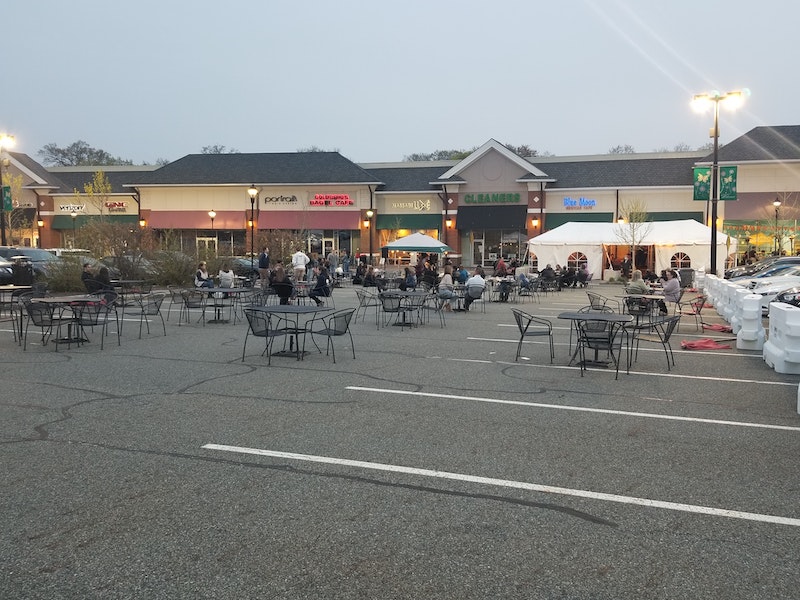 My town in northern New Jersey is largely built around the car. The commuter train station shut down in the 1960s—so abruptly that people stood there one morning waiting for a train that never arrived. There’s a modest downtown business district, not particularly conducive to pedestrian traffic. There’s no town plaza where people sit around or stroll serendipitously.

A positive consequence of the pandemic has been the cordoning-off of sections of the parking lots of shopping centers for outdoor dining and recreation. Here, finally, are outdoor spaces where people can enjoy amenities, run into their friends, interact with their communities, and walk from one establishment to another; where they’re in open air without the solitude of a backyard or park; where they’re spending less time sitting in a car or watching warily lest they step in front of someone else’s moving vehicle.

Here, one experiences some of the suburban dream of a life with more elbow room than what one could have in the city. In Manhattan, “outdoor dining” may occur in sidewalk enclosures that are little more than extensions of indoor space; this can feel like a joke or scam. In the suburbs, space that had been relegated to row upon row of cars and SUVs can be creatively reused. Capacious tents and awnings can let air flow; tables and other facilities, such as exercise bikes or sales counters, can be left without covering as long as the weather allows.

One hopes that many such changes will be permanent or recurrent. As the pandemic winds down, and the effects of sunlight and air on viral transmission cease to be a topic of pressing consideration, businessowners and town planning officials will be tempted to fall back on their conventional emphases on maximizing vehicular traffic and parking space. They may find, however, that many people enjoyed the expanded outdoors, the burgeoning middle ground between buildings and cars. These customers and patrons may vote with their feet toward places that retain an open feel.

A sure sign that lasting change has taken hold will be when many such spaces are transformed on a more fundamental level. Tables and other objects placed on top of a stretch of pavement marked with parking stripes will always have a certain incongruity and sense of transience. But introduce tiled surfaces, planters, walkways, light fixtures and so on, and the spaces will become accommodating in a way that underscores their usefulness for more than parking.

In travels over the years, I’ve seen places where some expanded capacity to be outdoors enhanced quality of life, and others where the lack of a transitional zone between building and cars did the opposite. On a trip to Greece a few years ago, we spent a few days in Nafpaktos, a seaside town with mostly domestic tourism. Between our hotel and the beach was a street closed to vehicles; this made for a nice atmosphere of friendly crowds among beach dining spots and no worries in stepping off a curb. By contrast, Caracas, Venezuela, which I got to know in the 1980s, was a place where any attempt to walk anywhere could quickly bring regrets. I recall a truck coming close to hitting me, and my mother yelling at the driver in English that he would’ve had difficulty not understanding.

In Nepal’s city of Pokhara, my wife and I found that if you need something from a pharmacy, there’s no need to go inside: just walk up to the sidewalk counter that encloses an area in front of the store and tell them what you want. On a trip to Italy long ago, I preferred Florence to Venice in many respects, but an important countervailing factor was that crossing the street in Florence could be a struggle, whereas in Venice the cars were parked far away on the mainland, and all movement was by foot or boat.

The parking lots of New Jersey are a new frontier in making space more welcoming and livable. It’s unfortunate it took a pandemic to highlight such possibilities, but it’s a lesson that should not be set aside in a post-COVID world.