The long history of Nassau, a street first christened in 1696 and a former name for Long Island. 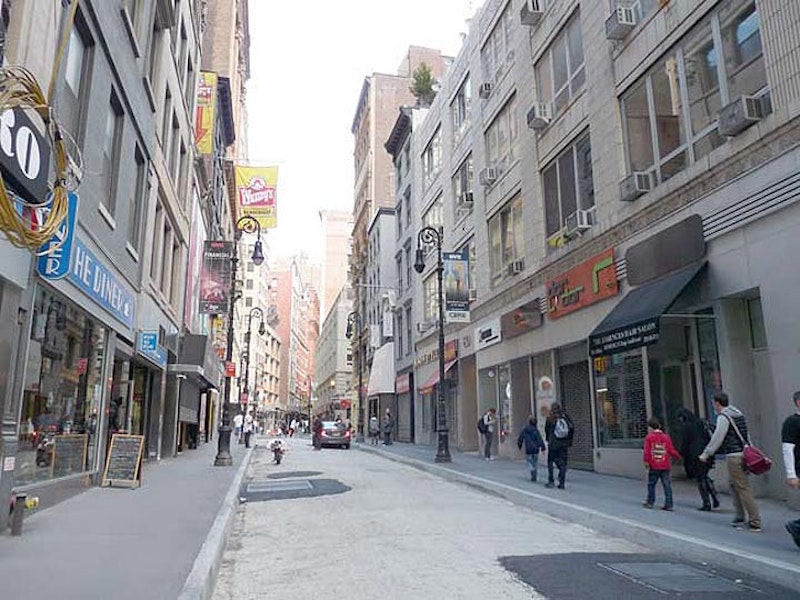 When NYC was still subject to the British Crown there were a number of streets downtown named Queen, Duke, and other royal titles. Most were wiped off the map after the USA won independence in 1783 and the British evacuated the country and NYC in particular. Queen became Pearl, King George St. became William (for early NYC mayor William Beckman), Crown became Liberty, and so forth. There are a few still around, though—Prince Street in Soho is one, and Nassau St. is another.

Nassau St. was named by 1696 for the House of Orange-Nassau in the Netherlands, which extended back to the Charlemagne. King William III of England, the person for whom the street name was bestowed, became king in 1689 and was Dutch by ancestry; his wife, Mary, was British. William’s army had forced Mary’s father, King James II, out of power. Dutch royalty remains to this day in the House of Orange-Nassau.

Nassau was also an old name for Long Island. Dutch explorers originally called it t’Lange Eylandt, or Long Island, but then during William III’s time the British called it Nassau Island. After US independence the name Long Island was restored, but when a new county was formed for three eastern towns of Queens in 1899, it was decided to name it Nassau. The capital city of the Bahamas, meanwhile, was named thus in 1695, also for William of Orange. 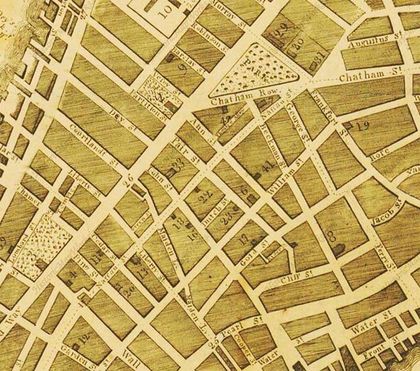 This colonial-era map from the late-1700s shows Nassau St. running north from Wall and Broad Sts. to Chatham Row and George St., today’s Park Row and Spruce St. The current orthography was still using the “long s” which died out about 1800.

Like Greenwich St., Trinity Place/Church St., Broadway, and William St., a subway line runs under Nassau St., a BMT line built in 1913 that crosses the Williamsburg Bridge and then an el running down Brooklyn’s Broadway, then on Jamaica Ave., terminating at Parsons Blvd. and Archer Ave. The Nassau St. BMT is probably the least patronized of downtown Manhattan’s north-south subway lines, and has suffered some deterioration over the years, especially evident at the Chambers St. station. 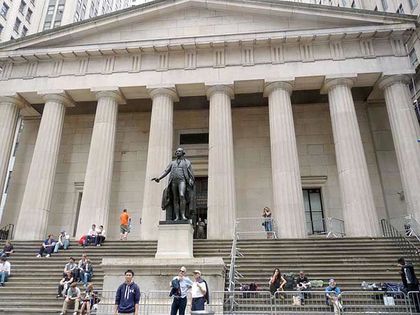 The first building seen when walking north on Nassau St. from Wall is Federal Hall, completed in 1842. This building replaced the second NYC City Hall, built here in 1700 and later remodeled extensively in 1788-1789 (by Pierre L’Enfant, the architect/urban planner who laid out Washington, DC) when it became the first United States Capitol building, a function it held for one year. George Washington took his oath of office as President at that building. It came to be called the original Federal Hall.

The old Federal Hall gradually fell into disrepair, and it was sold and subsequently demolished in 1812. Thirty years later, in 1842, the United States Customs House was built on the spot, joining the likewise Greek Revival U.S. Assay Office that was built from 1823-1826. The old Assay Office was demolished in 1915, but it’s still recalled by a sidewalk plaque, and its façade was dismantled and later reconstructed in the Metropolitan Museum on 5th Ave.

John Quincy Adams Ward’s monumental Washington sculpture was dedicated in 1883. There’s a smaller bas relief of Washington in prayer at Valley Forge on the right side of the steps, dated 1907. 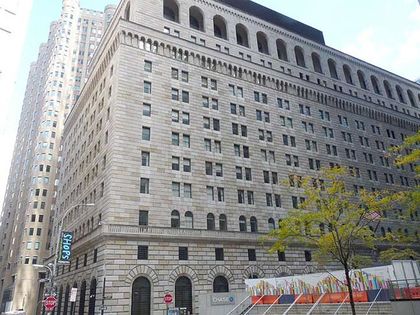 At the northwest corner of Liberty and Nassau is the Federal Bank Reserve of NY Building (York & Sawyer), completed in 1924 and consisting of Indiana limestone and Ohio sandstone. Five stories are below street level with subterranean vaults, containing the gold reserves of many nations, resting on bedrock. There’s more monetary worth stored here (over $90 billion) than in Fort Knox, Kentucky. The bank is the foremost in the dozen that make up the Federal Reserve System. 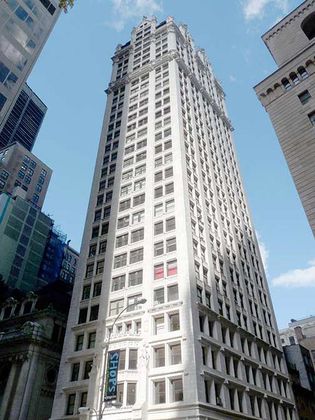 On the northwest corner of Nassau and Liberty is the one-time Sinclair Oil Building. Sinclair used a dinosaur as its mascot, and tall, stylish masonry towers coated with terra cotta like this are dinosaurs in their own right, as most towers built these days are glass-fronted (making them especially vulnerable to windstorms such as Sandy). Later called the Liberty Tower, it was converted to apartments in 1981. Finished in 1910, it seems now like a dry run for the nearby taller Woolworth Tower that came along in 1913. At the entrance, there can be seen pair of masonry alligators tying to shinny up the building. 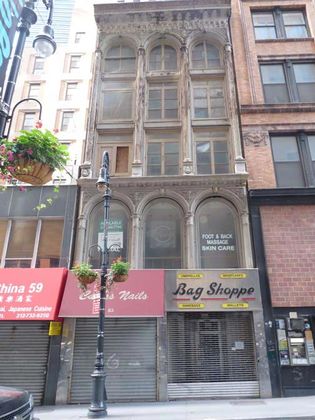 By some accounts, this building, at 63 Nassau St. south of John St., was built in the 1860s by an early giant of cast iron architecture, James Bogardus (1800-1874). His use of cast iron to cover building exteriors later led to steel-frame construction. In the Soho area, you’ll find dozens of distinctive buildings with such cast-iron cladding. A short street near Fort Tryon Park in far upper Manhattan is named for Bogardus, far from his architectural innovations.

The building has patriotic terra-cotta depictions of Ben Franklin. The empty spaces between the two Franklins on 63 Nassau St. used to contain two similar portraits of George Washington. How or why did the Washingtons disappear? Sloppy renovation, I suspect. 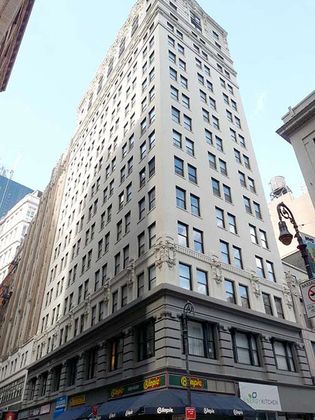 Cockcroft Building, northwest corner of John and Nassau Sts.. In 1916, a now-disappeared historic plaque was placed on the building by the Maiden Lane Historical Society to commemorate Nassau Street’s association with William of Orange. The plaque read:

Nassau Street
Known originally as
“The Street that Runs by the Pye Woman”
And was named in honor of
The House of Nassau
Whose head at the time was
William the Third
King of England
And sometime Stadtholder of the Dutch Republic
Nassau Street became identified with
The jewelry trade
More than half a century ago.
Erected by the Maiden Lane Historical Society, 1916 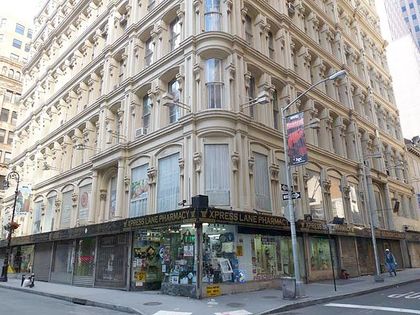 In the 1870s, incredible edifices were built. This one took 20 years to get right. The Bennett Building, on the NW corner of Fulton and Nassau, was six stories with a mansard roof when first built, was raised to 10 stories in 1888, and extended north to Ann St., seen here, by 1891. There’s a texture here with the recessed front windows and curved corner windows that can’t be matched by today’s glass boxes. The Bennett family produced James Gordon Bennett who ran the New York Herald; Bennett sent reporter Henry M. Stanley to Africa to find missionary/explorer/abolitionist David Livingstone in 1871. 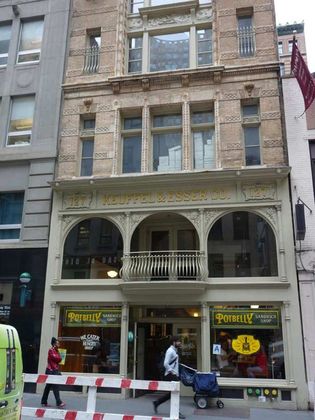 The Keuffel & Esser Building, 127 Fulton St. just east of Nassau. Architects DeLemos and Cordes used this as a dry run for their later, more massive edifices, the Siegel-Cooper and Macy’s department store buildings on uptown Ladies’ Mile. Above the ground-floor storefront here, you can see the cast-iron detailing: renderings of drafting implements and for some reason, a winged wheel.

For decades, before the era of pocket calculators, if you had to figure a complicated mathematical equation, you needed a slide rule, and that’s what Keuffel and Esser, K & E, produced. The company, established in 1867, also made compasses, transits, surveying equipment and other instrumentation, and are still going strong. 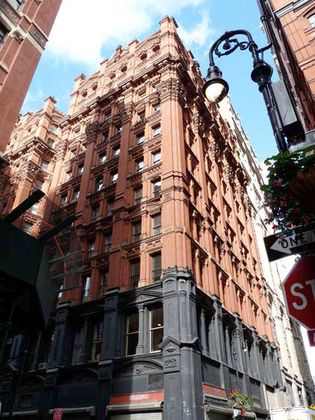 Potter Building, NW corner of Nassau and Beekman. Completed in 1886 and designed by Norris Starkweather, this was one of the first towers in Manhattan to extensively employ terra cotta on its facade. It was preceded by the headquarters of the New York World, which burned down in a scene vividly recounted in Jack Finney’s fantasy novel Time and Again. The Potter Building was also the first NYC building to be thoroughly fireproofed (by its developer Orlando Potter). 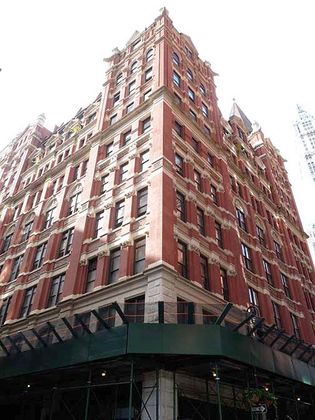 At the southwest corner of Nassau, Temple Court (or #5 Beekman) has been called one of NYC’s lost treasures. Completed in 1883, it joins the Potter Building as an early adopter of fireproof building methods. Amazingly, its nine-floor atrium with cast-iron balustrades was completely abandoned for many years. It was redeveloped as luxury condos, with a restaurant on the ground floor, after many years of neglect. The building was built by banker/Irish immigrant Eugene Kelly, who’d amassed the 19th-century equivalent of $630 million by the time he died. 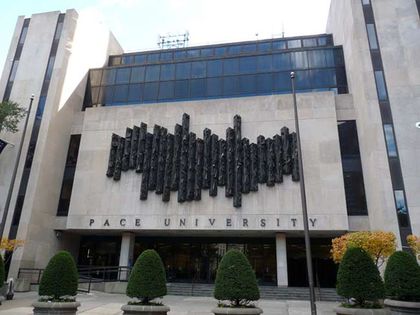 At the north end of Nassau Street at Beekman, Pace University fronts on a closed section of Nassau St. just before it reaches Park Row. The school was founded in 1906 by Homer St. Clair Pace and Charles Ashford Pace. The school, which was known as Pace Institute, originally rented rooms in the now-demolished New York Tribune Building on Park Row. Ground was broken for the current campus, One Pace Plaza, in 1966. It was approved for university status by the NYS Board of regents in 1973. The University has bought up other space in lower Manhattan and also has a campus in upstate Pleasantville.