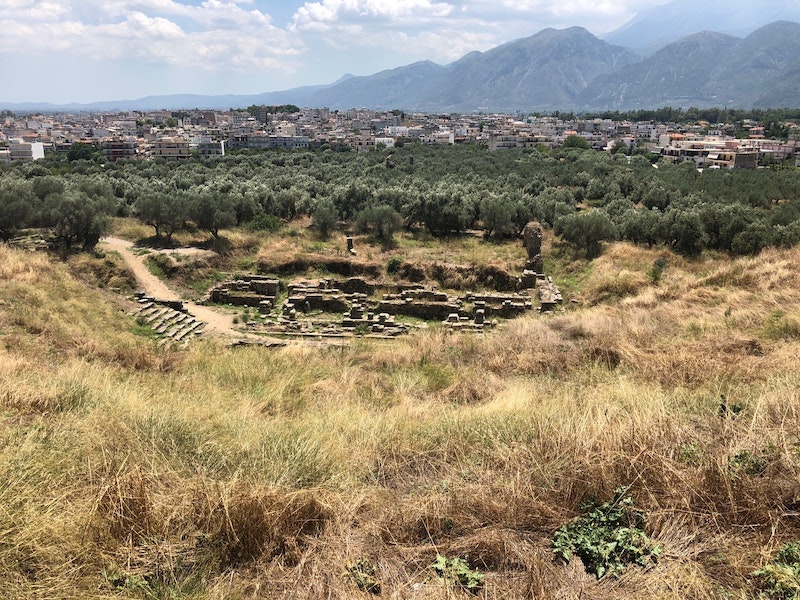 Thermopylae is where 300 Spartans and their Greek allies took their stand against the vastly larger invading force of the Persian emperor Xerxes, a defense that would echo through history (and be depicted in the 2007 film 300) as an example of zest for combat in a righteous cause.

Both in Thermopylae and Sparta itself (they are a few hours apart by car; the Spartans were fighting far from home) there are statues of Leonidas, the Spartan king who led the defenders, inscribed with his famous words: ΜΟΛΩΝ ΛΑΒΕ, roughly translating to “Come and get them,” a riposte to Xerxes’ demand that the Spartans surrender their weapons.

We took a family visit to Greece in July, emphasizing ancient sites. These included the ruins at Sparta and the battlefield at Thermopylae. Neither has the cachet of more well-visited places such as Delphi and Olympia, but still they give a sense of the ancient warlike city-state. Jagged mountains outside Sparta look like ideal training grounds for diehard warriors.

At Thermopylae, the narrow passage between rocks and sea, where the Spartans held off the invaders for three days, is broader now (the waters have receded and once came to where a highway now is). But you can imagine the ferocious battle that raged where you now stand.

In the movie, Leonidas exuberantly shouts to his soldiers that “Tonight, we dine in hell!” and they cheer with equal enthusiasm. When I got home from the trip, I found a package at my front door in New Jersey, and as I read through its contents I felt a twinge of recognition. Here was a spirit I’d encountered in these ancient sites, a spirit of not just taking a stand, of not just fighting against sheer numbers and living up to one’s principles—but of actually enjoying it.

The package was an advance copy of Rick Wilson’s new book Everything Trump Touches Dies.

Wilson is a Republican consultant whose opposition to Trump has been untrammeled since the moment the candidate descended his golden escalator and remains so now amid a corrupt and degraded presidency that looks oddly familiar to anyone who watched 300’s depiction of Xerxes as a preening maniac whose top priority is that people should kneel before him.

“Never Trumpers,” of which Wilson is emphatically one, are Republicans (the term sometimes also encompasses ex-Republicans such as myself) who oppose this president and whose opposition is rooted in what until recently were considered Republican and conservative values: limited government, free markets, fiscal probity, genuine nationalism (as opposed to a type that supplicates to a hostile foreign power), optimism and a basic sense of decency.

Within today’s GOP, the Never Trumpers may be as outnumbered as the defenders at Thermopylae. A recent poll found Republicans giving Trump an 88 percent approval rating, the highest of his presidency albeit a number plausibly inflated by defections from the party. Wilson and other high-profile Republican dissenters, such as David Frum and Tom Nichols, are bombarded on Twitter by critics saying no one cares what they think, a self-refuting assertion.

Small numbers don’t mean that you’re wrong or even that you’ll lose, in the scheme of things. The Spartans fell at Thermopylae only after a fellow Greek, Ephialtes (depicted as a hunchback in 300), showed the Persians a path around the Greek line. Moreover, the defenders’ stand inspired other Greeks to fight and, before long, to eject the invaders. Things change, and the standard pro-Trump operative or pundit of today’s GOP may look as bad as Ephialtes as the waters of Trumpism recede and the rocks of a decent conservatism remain.

—Kenneth Silber is author of In DeWitt’s Footsteps: Seeing History on the Erie Canal and is on Twitter at: @kennethsilber.