You're there with me. We’re always there together. 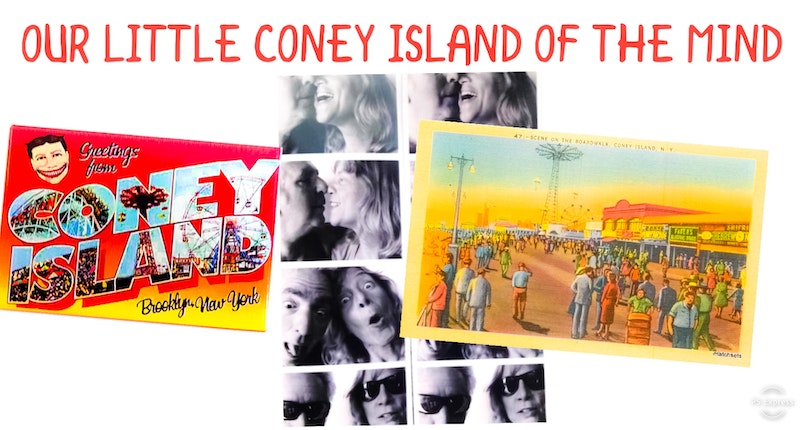 I roam around a lot, sightseeing along the boardwalk behind my eyes like a drunken tourist. We often visit on our journeys. To go nowhere and everywhere, doing everything fast, so slowly. It's always peak season on the midway and too crowded on the grand promenade. Mostly in so-called reality, I'm semi-detached from what's assumed accurate. What we'd considered authentic genuine artifacts are artificial flavorings in the spice of living life with zesty taste. It's highly overrated. I imagine that's why reality TV shows came into fashion. People need something made up to look and feel authentic. I'm too busy thinking about useless trivial nonsense, the minutiae about the information on information, thinking of nothing at all. It’s like a beefy au jus sopping up juicy views soaked somewhere inside a spongy labyrinth of doughy baked brainless thoughts. Sometimes l stumble, trying to escape in this other mindless self. Dizzy with life, you can't argue with the argument. There's no room for discussion. A hermit crab believes it's hiding in a shell. Skitters fast sideways, clueless to the sands of time in space. The future's constant history reset on repeat. You’re playing out, imitating dreamy notions of imaginary life events. The insect mind has no clue it's an insect. You could say winning is for losers without competition. In the hive mind, no one can hear you think.

I don't want to ruin anybody's fun time, always claiming winners in a twisted game of charades. The entire symphony orchestra is blasting, ringing in my mind like air raid sirens, noisy silence, hearing things that never make a peep. Some say they can listen to strange voices singing in their heads. Others claim they receive radio signals from outer space or hear phone conversations without even having a phone. I could blink in my mind's eye like 1960s TV shows depicting some phony mirror image of life gone back to childhood memories in my mind again.

I imagine my mind in the middle of the crowd at Coney Island during the climax of The Mermaid Parade. It's the worst day of the season. Ruby's is packed five deep to the bar. The board’s sagging, overcrowded with weight, tight-ass to elbow with a flood of humanity. The summer solstice heat is stifling, but the beers are cold. Public restrooms overflow with the dregs of human waste. The line to get into the toilets stretches along the boardwalk beyond the sandy beachfront to Brighton Beach. No reason not to answer the call of nature. I'm sure many wade out into the surf to let go. I would, and have. When nature calls, you must reply, waist-deep in a sea of fresh raw sewage. It's like bathing in the Ganges as a corpse floats along. Swimming in the East River during a record heat wave sewer backup. Everything’s made to scale. The crowd moves as one.

How could an immense world capture such a miniature pastoral landscape? Complete with plastic green pastures and cornfields. Under fake trees, a flock of wooly sheep stands like statues near a brown rubber fence. Some silicone black and white cows dot the astroturf hills under peek-a-boo clouds off in the not-so-distant distance. You’re chasing the sun's shadows. The bluest blue skies contrast artificial sunlight. So bright you squint to see clearly. Someone’s waving a high beam flashlight in your face. Somewhere on the other side of the world or just across the street from memory lives a different tableau, a whole new set of circumstances in a pretty secret scenario. With the way things are, how can we know such beauty?

All played out in the oldest amusement park by the seashore. It's the place where fun lives, if only for the price of cheap thrills. It’s a short ride on a rickety roller coaster of high anxiety, adrenaline emotions, and aching lousy back. It was no secret I wanted to be part of that circus, a sad clown with a painted smile. I’m putting on a happy face. A specimen so freakish, not even the sideshow would have me. But I have no exceptional talent. I hang my blank shingle above the entrance to my mind. We're always open, ready to serve you. I’m not settling for your average daydreams.

We’re spending a special weekend in our minds at Coney Island. You're there with me. We’re always there together, joined at the lips. Forever kisses speak with wordless sweet promise. We re-take that giant blind leap of faith in our minds. The days never end here as we cakewalk hand in hand along the shoreline. As the surf crashes down upon the shore, we float free on the water in the air below us. Together we're feeling no pain, strolling, reading minds as we wander into the unknown beyond the crowd.