The Ghost of Meow the Obese Cat

I’m certain you witnessed my misfortune. 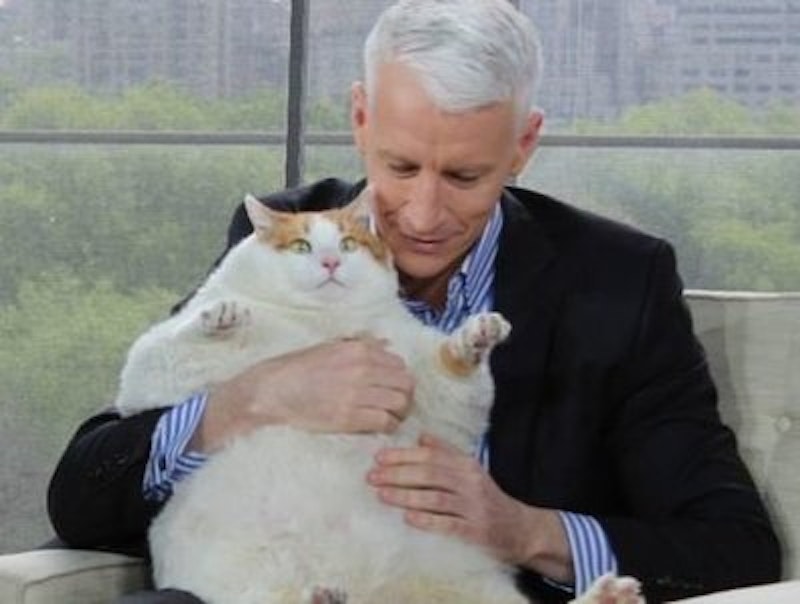 Oh, to have been someone else and not Meow the Obese Cat. The Old Long Johnson cat, maybe. That puss got his 15 minutes of fame and wasn’t borne to the ground by the crushing weight of his hideous, inexplicable adipose tissue in the process. Did you see how I walked? How I played? I couldn’t even ascend the stairs, for crying out loud.

I’m certain you witnessed my misfortune. It played on an endless loop for a few weeks in 2012, filling the empty minutes of your local newscasts and breakfast variety shows. Hugh Grant petted me. Cee-Lo Green had my best interests at heart. And right now, here in this hell that doubles as a kind of basic-bae heaven, I’m stuck in a moment no fortysomething person in their right mind would ever want to get out of: seated on Anderson Cooper’s bony lap, gazing into the “Silver Fox’s” piercing but curiously vacant blue eyes.

You can go back and read the comments from my admirers. I still do, world wide web-surfing ghost of Meow the Obese Cat that I am:

“This is one big cat- glad he is with people who are helping him get his weight under control. He looks like a cool cat though!”

“The news of Meow have reached Sweden too 🙂 Wish him and all of you the best. You’re doing an important job.”

“I saw Meow today in my local newspaper here in Halifax, Nova Scotia! Love Meow’s story and excited to hear about his weight loss journey! :-)”

“such a sweetie pie just want 2 see him every minute of the Day!”

“he is so adorable i just want to love on him lol…..good luck meow wish u the best in ur long journey but u can do it!!!!! i know u can”

“I would love to give meow my home once he is healthy….my cat passed away last year at the age of 13 and left a huge void in our hearts…..our other cat minx is lonely and my son has just started asking if we can get a new kitty..he took Casey’s loss hard…we would give Meow a wonderful life…we would love him like our child”

“Good boy Meow! Staying on your Catkins diet is working. Keep up the good work buddy…you are going to feel great when you get down to a healthy weight. XXXOOO”

“good luck Meow! i hope your hard work pays off!”

“Meow u are more beautiful then my sons I want u”

“Meow, I love you! Just watched you on Anderson. You are a beautiful kitty. You can do if! I know your doctor is going to help you get healthy. I am cheering you on.”

Your support meant so much to me. I’m glad you thought I was more beautiful than your sons. I’m grateful that the people in Sweden worried so much about my goings-on. I was pleased to hear that my name rang out in Halifax, Nova Scotia.

But you know what? None of that meant anything. After all, I suffered from a severe urinary tract infection that caused me to gain weight at a rapid rate. The resultant weight gain killed me shortly after my second birthday. Not gonna lie: it kinda sorta sucked, folks.

My elderly owner did the best she could, but she couldn’t afford to keep me on the ridiculously expensive “science diet” today’s catkins-obsessed kittens prefer. She just filled my bowl with hot dog trimmings and let the chips fall where they may. So be it in what was to be renamed Donald Trump’s “White Trash” America, am I right? Ha ha ha. The “white trash” are hot in 2017, or so I’m told by all those think pieces I skim. Anyway, at least in death, things seem much less painful than they were in life—even if I’m forced to endlessly re-live these last minutes in Anderson Cooper’s lap.

Are there any obese house cats like me roaming around the veldt or the taiga? Immobile cats whose meat is as finely marbled as mine was? I don’t wonder that for long, though: Anderson Cooper starts tickling my triple chins. Lots of people, including the people at People, think Anderson is a beautiful man. Perhaps he’s chasing my chub; perhaps I’m lucky to be here, held in the arms of America’s sweetheart.

More comments, to warm this overtaxed feline heart beating behind these thick walls of blubber:

“I love this prett-E kitty! Wishing him all the best!”

“I just had a thought. I carried a backpack today that weighed 15 lbs and I thought that’s heavy enough. Crikeys! Put Meow in there and I doubt I could have carried him! Ha ha”

“I’m jealous of Meow… I want Anderson Cooper to hold me too! :)”

“I am a social worker. I used to work for hospice and adopted one of my patient’s kitties when she passed. He weighed 28 pounds. He now weighs 26. I would LOVE to adopt Meow. :)”

“I love Meow! I have a two year old cat, Madeleine, that is slightly overweight. This encourages me to switch her diet to avoid future problems. Good luck Meow! I cheering for you.”

“I have a Maine Coone who is extremely handsome and sweet and chatty, he tipped the scales at 29.8. He’s a huge cat, not fat belly sagging on the ground, he’s healthy, quick and agile. He does have some common urinary issues found in male cats, we recently put him on grain free canned wellness food, he gets half a cup a day spread out through 3 feedings, he’s lost about 3 pounds in a month(26) and is fur is looking better than ever. Good luck to you Meow, if Jake can do it, any cat can."

“Keep losing weight, buddy. I have a couple of cats that would like to meet you.”
•••

In my wildest dreams, I’m a svelte 12-pound desert cat, able to gambol and pirouette and stand en pointe. My future spreads out before me like creamy Nutella and chopped hot dog pieces slathered across Morton’s multigrain bread.

But that future is past: I’m always going to be trapped here with the nation’s most trusted newscaster, unable to wriggle myself free of his long, slender fingers. The tall, goofy-looking woman from that forgotten 1990s sitcom is asking my veterinarian why I’m so fat. The people in the studio audience, some of whom are nearly as obese as I am, chortle in response to this remark. I manage a weak sigh.

For better, for worse, for richer, for poorer, in sickness and in health, until a fate worse than death does us part, this body remains my temple and my tomb.