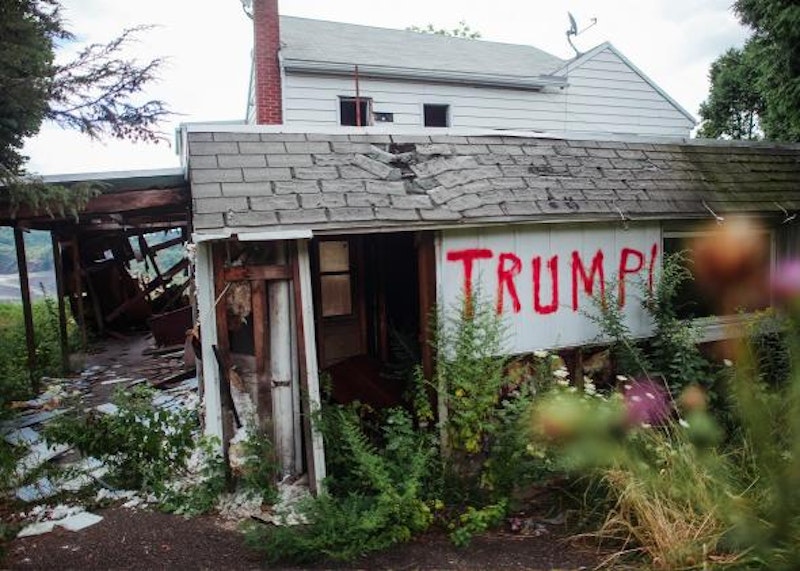 The general consensus among my friends, family, and the writers of the news stories, articles, and rants that I come across online seems to be that the current political divide in America is between liberal and conservative, between progressive and traditionalist, between big- and small-government supporters. This is true, I think, but there’s another way to look at it: as a divide between rural and urban, which is, to my mind, the cause of the other divisions. There’s a fundamental difference in perspective between how people living in the country tend to see the government and how their urban counterparts see it. I’ve had both perspectives because I’ve lived in both contexts, having been born and raised on a couple of different farms, and having lived and studied in three different cities. To show you what I mean, I need to tell you about two places I’ve lived, and how the people there deal with their garbage.

In the small town of Pahala, where I did a lot of my growing up, they don’t have curbside trash pickup. They don’t even have curbs. What residents would do, until after I went to college, was drive down to the dump—a paved ramp where you could back up to a tractor-trailer and drop your trash in, then leave. But when the Environmental Protection Agency—the agency our rurally-elected president has said he wants to destroy—made a rule stating that counties need to ensure people aren’t dumping hazardous materials like paint and car batteries (which we totally were), we were no longer allowed to dump our own trash whenever we wanted. The county installed a gate around the dump, and paid an attendant to sit beside the bin for a few hours every other day. When he wasn’t there, the dump was closed. There was a predictable outcry, and many people, used to a greater degree of freedom, would just dump their trash at the front of the gate as a form of protest. Then a police officer began to stakeout the dump on its closed days, and discussions about wasting our tax dollars got louder, and darker. From the rural perspective, this looked like nothing but a stupid regulation making good folks’ lives harder, like the government taking our hard-earned tax dollars and doing less than nothing with it.

In the city of New Orleans, where I live now, I can’t even begin to pretend that the regulations about dumping trash aren’t important. In cities like New Orleans, the proximity in which we live makes it more obvious how important it is that we all follow the rules. Those rules, and the hardworking young men hanging off the back of dump trucks rolling through the city, make it possible for so many New Orleanians to live so close to each other, without drowning in our own trash. Back home on my parents’ farm, we could probably make piles of our own waste for years before anyone else noticed—decades before we’d even begin to run out of room, environmental concerns notwithstanding. Here, if any of my neighbors decided to do that, it would quickly become not only their problem, but mine as well. Here, when a neighbor decides to take apart his truck’s transmission on the side of the road, it impacts us all. And while I wasn’t the one who called them, I won’t pretend I wasn’t sad when the cops made him move his auto shop out of the street and clean up some of the mess he’d made, because doing so made my life a little easier.

In the country, some dude having to move his truck would have been seen as a government official causing trouble because he can, not a cop protecting a neighborhood’s right to public space. In the country, my repairman neighbor wouldn’t have been blocking his elderly neighbor’s access to the sidewalk, and he wouldn’t have been putting his motorcycle-riding neighbors at risk with a motor oil pool where they needed to turn to get out of the parking lot. And if he had been inconveniencing us, in the country, we’d probably have dealt with the problem ourselves without needing help from any representative of the law. In the country, he would have been minding his own business, and we would have seen any interference by cops or officials as just another example of government getting in the way of regular folks trying to live their lives. Or at least, in the country, we’d have been much more likely to see it as oppression, rather than the protection of social order.

Society is all about individuals sacrificing freedoms for the communal benefit, and in the country, it’s often easier to see the sacrifice, and harder to see the benefit. In the country, we don’t see the EPA making sure our drinking water stays clean and we don’t see it ensuring that our grandkids will be able to enjoy a healthy ecosystem. All we see is the government telling us where to dump our trash and when it’s okay to hunt or fish. In the city, meanwhile, it’s the benefits that are more visible—streets that are passable and parks without litter or drug dealers. You’re unlikely to feel the loss of any freedom, unless you happen to be a drug dealer or a chronic litterbug, but everybody sees the impact of social policies, because in the city the impact of these policies are more visible, and the consequences of not having them are more immediate.

It’s this, I think, that drives many rural Americans to believe in small government and so many urban Americans to want bigger government. Nobody completely trusts the government or the people in it, but in cities, it’s much easier to see the benefits of social restrictions, and it’s harder to imagine your community would be better off on its own. This is clearly an overly simplistic way to think about the complexities of sociopolitical thought in America, and I obviously don’t have a solution to any of our problems here. But still, I can’t help but wonder how different our national debates would be if everyone had lived in as different and as disparate places as I have. I can’t help but wonder what would change if all the country folks and all the city dwellers I’ve lived with got to see where the other side is coming from.