When we was fab. 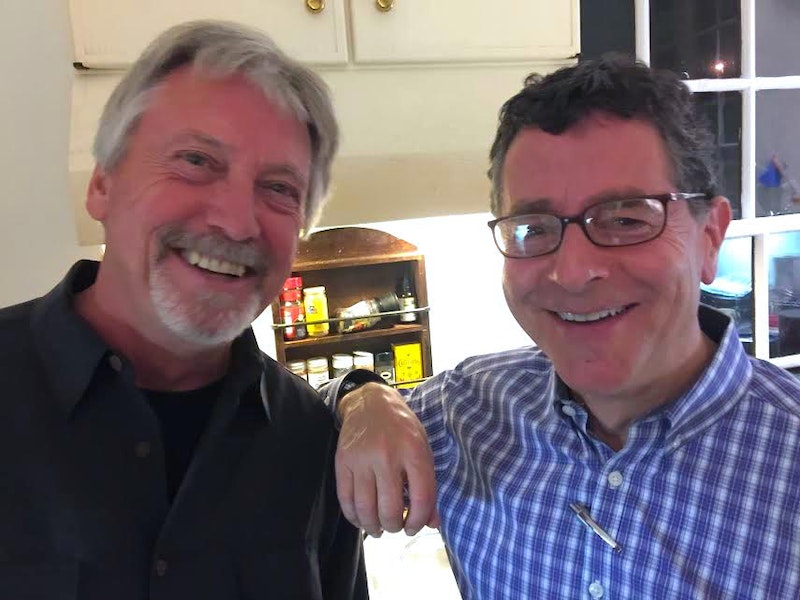 Once a person turns 50, I’ve observed that a casualty of age is spontaneity. That’s not across the board, obviously: for example, my friend Mary Bartkus, who laps me in years by seven or eight, is a marvel, seemingly in a new city, usually abroad, every other week, usually for work but pleasure as well. That kind of pace would short-circuit my equilibrium and staid routine. During the baseball season, I need a couple of weeks notice for a night out, so I can weigh the benefit of trying a new restaurant (those opportunities are rare in Baltimore, a city whose quality dining options are the precise opposite of a coals-to-Newcastle locale such as London, New York, or Chicago) versus missing a Red Sox broadcast.

Early in September, my college friend and then professional colleague Joachim Blunck (commonly known as JB) wrote to say he’d like to plan a mini-reunion that would include a small number of people who worked at Baltimore’s City Paper at some point from 1977—founding date—to 1987, when my partner Alan Hirsch and I sold the weekly to the once-robust regional media company Times-Shamrock Communications. (The picture above shows twin Dorian Grays JB and Alan.) I hadn’t seen JB in a number of years, as he now lives outside Occidental, CA with his wife Delia, and so he, Alan, and I worked out the logistics—not easy!—for two events that took place last weekend.

A year older than Alan and me, JB had a fulltime job when he was easily persuaded to help out on the catch-as-catch-can alternative newspaper that was produced, sub rosa, in the offices of the college newspaper we’d worked on, the Johns Hopkins News-Letter. (The paper was briefly called City Squeeze, a marginally less hippy name than my first idea—The Baltimore Blast—that came to me in Denver in the fall of 1976, while I vacationed from Hopkins and worked at College Press Service, and plotted privately about starting a paper the following year.) His role increased almost instantaneously, and JB wound up designing the paper and supervising production, as well as driving his yellow car—no idea of the make, we just called it The Banana—to our printer in West Virginia to drop off the flats.

The talent of JB didn’t go unnoticed at similar weeklies around the country, and in 1981, after designing our start-up Washington City Paper, he was hired by the Village Voice, a poach that was painful, but one that Alan and I knew was inevitable. He went on to a high-octane career in New York, first at the Voice, and then as a valuable cog in the Rupert Murdoch Machine, including the first tabloid TV show, A Current Affair, as well as The Reporters and Good Day New York.

He was in a zany world, and when I’d visit him uptown, the stories he told—none can be repeated here—were just the kind I have a sweet tooth for. I haven’t the space to tick off his very long resume, but will note that our friendship endured and he very generously took time from his schedule to help me with the technical aspects of New York Press, the weekly I started in 1988. Actually, “technical aspects” is an undersell: he fashioned NYP as the first desktop-produced weekly in the country, labored with art director Michael Gentile (another CP vet, who, after a stint at Hustler in Los Angeles, moved east), teaching him, and the rest of our small staff, how to operate on an Apple-based system. Just three years earlier, at CP, we’d still been banging on typewriters. JB also re-designed NYP in 1999, perhaps his finest work in that realm.

I suppose digression is also a sign of age, so I stand accused and will settle in the dock. (Also—though not in my case—embellishment, though I think everyone gets a get-out-of-jail-free card for that benign transgression, as long-ago memories are unconsciously altered, gussied up, and maybe devoid of details that are better left to our fleeting personal histories, tucked off in a trunk.)

Anyway, last Saturday night Jennifer Bishop (a News-Letter and CP stalwart, who went on to an extraordinary career in photography) and Mark Cates hosted a cozy, and delicious, dinner party for a dozen or so mutual friends. It was laid-back (cue “Lay Down Your Weary Tune”), jovial, and nostalgic, a far cry from the raucous parties we attended, or threw, back in the 1970s and '80s. In fact, it was at one of those drink-till-you-puke, toke-till-you-see-double parties, in mid-1978, that JB and I were buttonholed in a corner, talking about work, as people do, and I made the grandiose, and perhaps silly, comment that he and I could become the next Clay Felker/Milton Glaser combination. He loved that. What the hell, you itch, scratch, and claw to set the world ablaze at that age, and if you work hard, and persist (as Alan reminded the collected was one of CP’s reasons for success; we wouldn’t go away and Baltimore’s resistance wilted), you collect a couple of golden nuggets along the way.

There were a number of stories told that night—including reminiscences from Michael Yockel and Gentile (who kept it R-rated; discretion forbids elaboration)—but none was as juicy as a chestnut Alan unearthed as we sat down to eat. As the ad director/business manager, Alan had the often-onerous duty of negotiating with our printers, some better and more accommodating than others. No name necessary here—although I’d imagine the man in question has either gone on to his reward/penance, or is marking time in a nursing home—but the fellow Alan met for dinner one night was a staunch Christian (and possibly a KKK member, though that’s just conjecture) who attended his West Virginia parish faithfully every Sunday and was an ostensible leader in his community. It’s now revealed that he told Alan—in a clumsy bonding attempt—that when he went “whoring,” it was always in an adjacent town, since he had an image to maintain. Alan said he suspected this boor expected a similar story in return, which only said that he didn’t know my partner well at all, as his wife Dina—they met in high school—knows better than anyone.

The following day, Alan opened a room at his local dining institution Donna’s Cross Keys (he’s partners with the delightful Donna Crivello) for what I eyeballed as 30 or so men and women who spent time at City Paper in the early days. One loses chunks of knowledge as time passes, and I was amazed, upon getting re-acquainted with the boisterous Rachel Baum—who sold advertising space when it was tough sledding—that she’d worked at the paper for just a year. Rachel and co-conspirator Laura Siegel (unable to attend) provided a lot of laughs at time when they were needed. She’d rush in from an unsatisfactory appointment, and say, “That asshole, I am so over him"—at a time when that phrase wasn’t common.

Craig Hankin, another college buddy (now Director at the Center for Visual Arts at JHU)—who hand-lettered the logo of City Squeeze—was there from the start and like everyone performed whatever duties were necessary. Which included selling, or trying to, ads. He recounted on Sunday just what a difficult and slimy task that was, in pre-Harborplace 1977, and rattled off a rogue’s gallery of characters (that’s polite) who clenched the dollars they owed us so hard the bills were almost dust by the time they forked it over.

Jim Burger, who’s currently the de facto mayor of Baltimore—too bad he couldn’t take over from the feckless Catherine Pugh—took photographs (a busman’s holiday for him, since that’s his profession), a bunch of which were posted on Facebook. After Jennifer moved on to The News-American, Jim, Barry Holniker, and Joe Kohl (the latter two sadly deceased) took over the shutterbug beat, accompanying the likes of reporters/critics Michael Anft, Phyllis Orrick, Yockel, Cliff Welch, John Strausbaugh, and Granville Greene, to name just several, to locations throughout the city. Also in attendance were Rafael Alvarez (40 years ago the pup in the crowd, since he wasn’t yet 23), Gary Frahm, one our first credentialed salesman who we snatched from Baltimore magazine, and a consummate schmoozer, Mary Ellen and David Porter, Ann Feild, Tom Warner, Anne Jackley, Frank DeFilippo, and not a single crasher.