The Freedom to Ride

It’s only those who experience judgments, accurate or otherwise, who can tell you the impact. 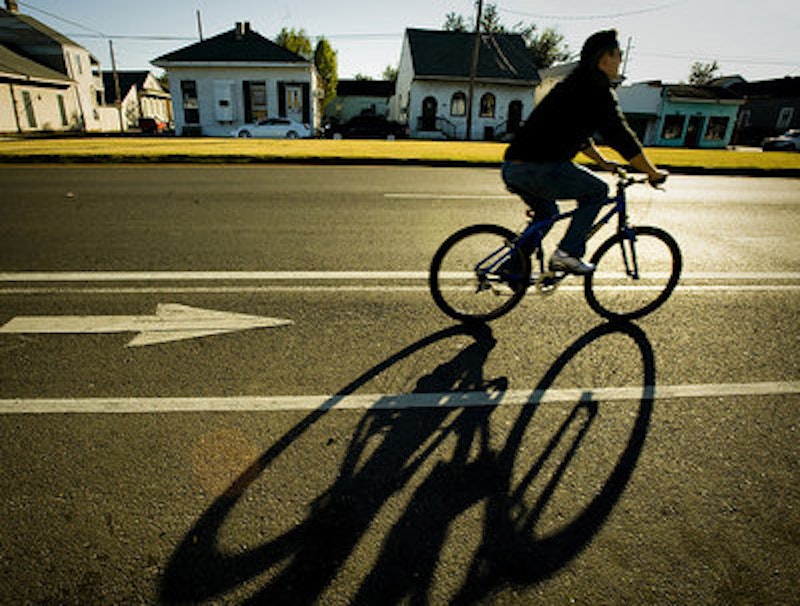 For almost a year, I rode a bicycle in Fresno, an inland California city that combines suburban sprawl with abysmal public transportation services, and tops that off with dangerously inconsistent bicycle lanes. A month before I was to leave Fresno, I had an experience that helped me understand how people—some, at least—look at those who choose not to drive despite the challenges inherent in doing so.

At about nine in the morning one weekday, I was a block from my girlfriend’s house, on the sidewalk with my bike, waiting for the light to change. I was watching a very tall, scruffy white guy working hard to ride what was clearly a child’s bike, going the wrong way down the empty street. He slowly ran the light I was waiting for, making a beeline towards my corner. This wasn't uncommon in Fresno. I’d been there a couple of years and was already used to seeing bicyclists doing really stupid things, like riding on the center line of busy four-lane roads, riding while pulling shopping carts, and riding while carrying very small children or car tires. Fresno is the kind of place where riding a bicycle is often a sign that you don’t have any other option. In a city that spends months near or above triple-digit temperatures and sprawls for miles in every direction despite its relatively small population, bikes are Fresno’s transport of last resort—or at least, that’s the assumption, as I’ve learned.

I hadn’t thought much about this before seeing that tall, scruffy guy on his too-small bike pedaling awkwardly over to me. I was a little apprehensive about him, because of the way he was riding a bike that didn’t fit him, in a way that suggested he either didn’t know much about riding on streets, or he knew what he was doing and didn’t care. He rode up to me and stopped in the turn lane, still facing the wrong way, and said good morning. I nodded, said something about how it’s nice to have the streets to ourselves, in order to foster some kind of anti-car, pro-bike camaraderie, because that seems like what people on bikes are supposed to do. He smiled and asked me for a cigarette. I don’t smoke, and was often obliged to tell that to strangers in Fresno. He just nodded as if that was the response he’d been expecting, whether he believed it or not. Then he offered to sell me his bike for $50. I thanked him but said no, that I already had a bike. He laughed as if I’d just said the funniest joke, and said “DUI’s suck, bro.” Then he rode off down the wrong side of the street.

For some time after that, I thought about what it means that a complete stranger had assumed so much about me. All he knew was that I was white, male, fairly young, and riding a bicycle. Enough, in that part of Fresno at least, to assume that I shared his situation—riding a bike because I had to. And even though I did have a car, and at the time it was running fairly well, there was a bigger difference between the man and me. I’d come to Fresno for graduate school and  was teaching at the state university, so even though they paid me little enough that I qualified for food stamps, and even though I didn’t have any savings to speak of, and little in the way of valuable possessions, I didn’t really belong to the group that he thought I did. What it really comes down to is that while he seemed to have been riding a bike because he had no other options, I was riding because I chose to. I’d chosen to ride that morning because I wanted to, and the ability to make that choice is a form a privilege I wasn’t completely aware of at the time.

I was reminded of the Fresno bicyclist a little while ago, in New Orleans, where I’ve lived the past three years. It’s a better city for bikes than Fresno ever was—just as flat but with more bike lanes, a much smaller footprint than sprawling, suburban Fresno, and the drivers, while generally eccentric and prone to unpredictable behavior, are more used to seeing bicyclists and therefore better at sharing the roads than the average Fresno driver. A little while ago, I was talking to a friend of a friend about how easy it is to bike in New Orleans and he nodded, probably to be polite, when he said almost casually that he couldn’t bring himself to bike around like that. Assuming he was thinking about safety, I started to talk about judgment and risk aversion, when he stopped me. “I just can’t ride without people assuming I can’t afford a car,” he said.

It took me an embarrassingly long time to understand what he meant. He’s black, and in New Orleans a young, black guy on a bike means something—something I hadn’t thought about since Fresno. That guy on what I hope was his younger brother’s bike had assumed that my riding a bike meant I had no other option, but I’d forgotten—or perhaps never actually known—what that kind of assumption can do to shape people’s behavior. Either way, I wasn’t prepared for the conversation I thought I’d have to shift towards one that took in bigger issues than the intricacies of traffic laws and local driving habits.

I didn’t tell my friend’s friend that with my current bike, a shiny, thin-wheeler that looks to the untrained eye like it costs as much as my rusty old car in Fresno, no one would assume I couldn’t afford to drive instead. I didn’t tell him that I’d see lots of black men and women on bikes without assuming that they had no other option, though there are exceptions, such as the guy down the street who rides around with a weed whacker over his shoulder and has asked me half a dozen times whether I’d like to pay him to cut my grass. And I especially didn’t tell him that while some people might make assumptions about him because of his skin color, there’s no sense in changing his behavior to appease them. I wasn’t quick enough to think of anything of the kind in the moment, but I’m also not in a position to understand any of this. It’s only those who experience judgments, accurate or otherwise, who can tell you the impact, the cost involved.

Still, when I think back to that conversation, I can’t help but remember the guy in Fresno who’d assumed I was struggling with the same difficulties that he evidently was. He hadn’t known any more about me than what he could observe, and what he could observe told him I was most likely someone he could fit easily into his worldview. In much the same way, I guess, my friend’s friend would be judged by many of those who see him riding, if he ever chooses to ride. The difference is that while I had to be told, if indirectly, what that judgment was, he already knew all about his situation, and what it looked like from the outside. And that, perhaps more than anything else, demonstrates the privilege of riding while white—the privilege to choose, the privilege of not already knowing.