From St. Anselm School to the Center for the Media Arts. 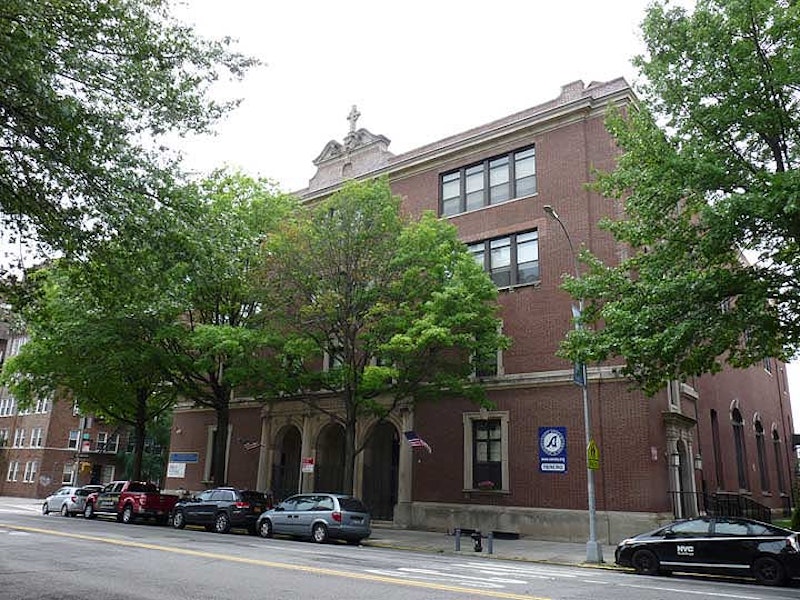 I have roughly the feeling about my old schools (and workplaces, for that matter) that Donald Fagen had in his song on the same subject: “California crumbles into the sea, that’ll be the day I go back to Annandale.” While I’ve had a difficult or diffident relationship with my various schools over the years, I am also an inveterate nostalgist—so I find myself drawn again to all these places.

I attended St. Anselm School in Bay Ridge between 1962 (kindergarten) and 1971, and still revere June 17, 1971, the day I graduated, as a personal holiday. I haven’t set foot in the place since, but I still remember, after all these years, many of the names of my teachers: Miss Buffa, Sister Aelreda (I tend to remember unusual names), Miss Kennedy, Mrs. Holt, Miss Laffey, Sister Carlann, Mrs. Barrett (a kindly, empathetic woman), and Sister Meletia, a bitter old crone who, not to my surprise, had the school’s basement rec room named for her soon after my departure. I asked Meletia for something one day and, taking this as an act of impudence, quickly shot back, “I wouldn’t give you the time of day.” Perhaps she sensed the hostility I had for the place by that time; by 1970 I was thoroughly over it, as I was bullied and was constantly fighting with several of the tougher classmates by then.

Still, I’ve always been a historian and researched the parish a little after I escaped its clutches. As a parish, St. Anselm was founded in 1922 and the combination church and school building you see above went up in 1926 at 4th Avenue and 83rd Street (many older parishes around town still have this combo arrangement). I joined the altar boys in 1967, when the new rites came in—I just avoided the Latin Mass. I was involved in Scouting, but I was never athletic, so never got on any of the sports teams. My grades were good at first, but began flattening out as I reached my level of expertise, or incompetency, around the 7th or 8th grade. As I became more self-aware in those grades, I came to a greater recognition that I wasn’t getting treated with the human respect I thought I deserved by some of the nuns, though I’m sure they’d disagree with that assessment were they still alive. Most of the lay teachers treated me just fine. 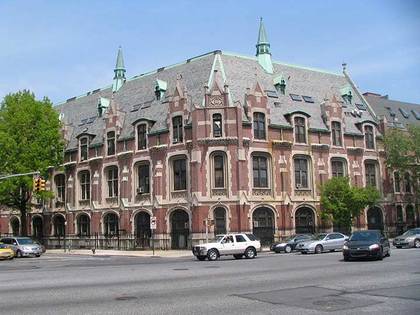 My next school was a fortress-like building, a magnificent Flemish Gothic pile at #555 Washington and Atlantic Avenues, festooned with concrete crosses, gargoyles, and two magnificent spires. As a matter of fact, the two student publications were called The Spire and The Gargoyle.

An intimidating iron gate protects what looks for all the world like a moat. The former Cathedral Preparatory Seminary was built by the Brooklyn Diocese in 1914-1915 and was originally a six-year seminary where young men would be trained for the priesthood. I haven’t mentioned it much, but I knew when I enrolled that I did not have a vocation for the priesthood. The reason I attended was simple. When Cathedral Prep offered me a four-year scholarship, the choice was clear for my family and me. The commute was arduous (though at ages 14 through 17 I took these things in stride; I took the B63 bus down 5th Avenue in Bay Ridge to Atlantic Avenue, where I would wait for the B45. In the 1970s, the Underberg Building was still there; it was replaced by Barclays Center; the vast PC Richard was a row of brownstones; and the Atlantic Mall was a meat wholesaler. I was not into any urban explorations of the area in the '70s, since I heard tales that the surrounding streets could be veritable war zones.

The faculty was a mix of priests and lay faculty, some saintly in mien and some violently profane; I once saw my (lay) math teacher, who got along with me for the most part, deliver a vicious beating to a guy who had mouthed off to him in the hall. I saw none of the buggery that springs to many minds all too quickly when they hear of an all-boys’ school staffed by priests. However, tales of abuse by some of the faculty after they left the school came to light long after I graduated, some debunked, some swept under the rug.

After the 1985 class graduated, which numbered 16 students, Cathedral Prep closed in Brooklyn, and underclassmen moved on to other schools including the diocese’s other Cathedral Prep school in Elmhurst.  After a few years, 555 Washington Avenue was divided into apartments. About ten years ago, one of my Forgotten New York fans, Linda P., graciously invited me in to see what the building looks like now. The common areas were recognizable. The center courtyard, where we had a whiffle ball league (I once hit an inside the park grand slam that the “centerfielder” had to climb a ladder into a storage shed to field) was tricked out with planters, but the old gargoyles still looked down on the action. 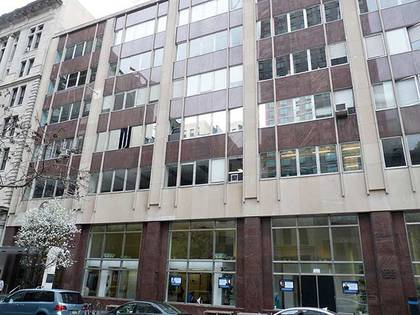 In 1975, after graduating from Cathedral, I enrolled in St. Francis College at 180 Remsen Street in Brooklyn Heights, which offered a partial scholarship. After four years in an all-boys’ school, it was refreshing to attend school with girls, now women, again; St. Francis had started admitting women only six years earlier, in 1969. After nearly a century on Butler Street in Cobble Hill, the building itself was relatively new, as well. I was an indifferent college student; none of the classes interested me, but I knew I had to muddle through the curriculum to get the sheepskin that employers wanted to see on a resume. In retrospect, I imagine I should have been packed off to a trade school to learn something practical such as plumbing or electrical work, which have unions and relatively assured income. But what did I know about what would happen thirty years in the future?

At St. Francis I did find a niche, of a sort. I gravitated to the school newspaper, where I learned printing and proofreading terms and how to edit and write copy, as well as layout and mechanical skills. These skills did get me nearly steady work for decades to come. I made some friends there I still have to this day, those that are still with us, that is. The first inklings of urban exploration entered my brain as well, as I made furtive forays into Brooklyn Heights and the waterfront, where thousands still worked—it wasn't parkland as it is today. 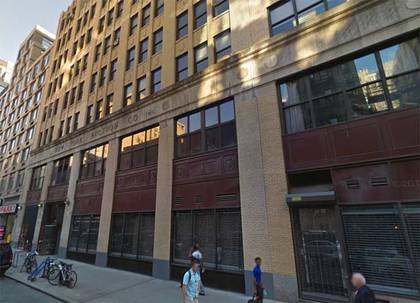 St. Francis College wasn’t the end of my schooling. During the fall of 1990 I made a very good decision to attend a trade school, the Center for the Media Arts, at 226 West 26th Street between 7th and 8th Avenues. Classes lasted from September 1990 to early 1992; I took classes in design sketching for advertising, video graphics, type (which I did quite well in), and most importantly, computers and computer graphics. I did not own a computer when I entered CMA and wouldn’t own one until 1994, but this school set the groundwork for my employment over the next 20 years, as I spent hours in the computer lab, even on weekends, teaching myself programs such as QuarkXPress, Illustrator, and Photoshop on the school’s collection of Macintoshes. I even joined the staff as a typesetter before my classes were complete and I received my certificate. I consider the tuition I spent at CMA worth much, much more than the tuition my father and I spent at St. Francis.

The Center of the Media Arts closed in 1992. By then I was working at Publishers Clearing House in Port Washington, so the commutes between those two jobs were getting tough, anyway. CMA was losing out to its much more famed rival, the School of Visual Arts on East 23rd Street. A merger was attempted with Mercy College in NYC’s northern suburbs, but it didn’t work out.

At age 59 and facing slim pickings in the printing and graphics fields, I may have to go back to school once again to learn something new. But I have yet to decide what.