The End of the World As We Know It 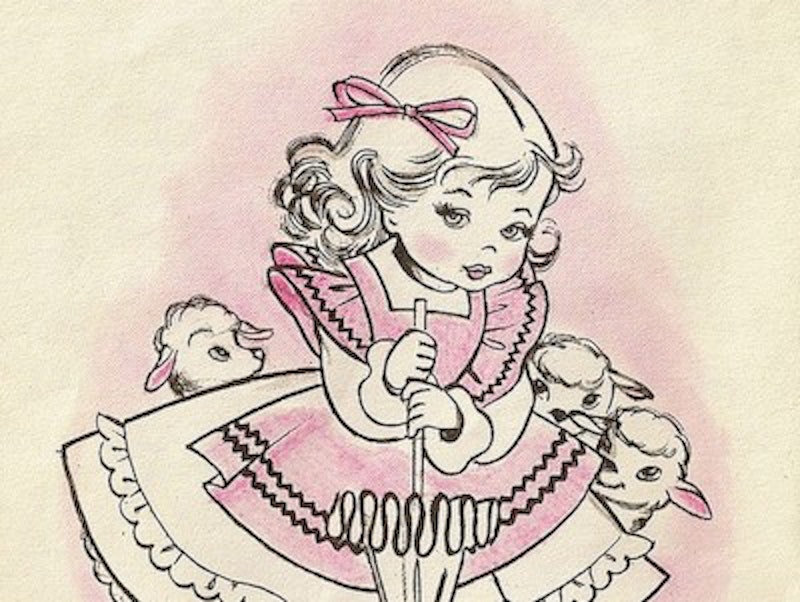 I write stories. They’re about sisters growing up on the prairie. The sisters wear old-timey items like bonnets and bloomers. The sisters take great pride in these, scrubbing their bloomers up against the washboard with homemade lye soap, starching their bonnets to a fashionably firm crispness.

When the sisters aren’t tending to their pioneer accessories or engaging in child labor, they mostly just sit around reading the King James Bible. Sometimes they play a primitive form of Tiddlywinks, called Widdlytinks. Oh, and sometimes they learn important life lessons, like when a beloved barnyard animal, a family member dies or there’s a famine.

I’ve been writing these stories for a long time now. It’s mostly a stress reliever, a form of escape. When yet another person from one of the online-dating sites doesn’t call to ask me to go on a second date; or the temp agency sends me to another boring, low-paying gig; or my mom calls crying and says, “Where are my grandbabies? I was supposed to have grandbabies by now!”—I think, “Hmm, what are the Li’l Bonnet sisters up to today?”

Depending on the day, the sisters might be catching butterflies with a big net, or having a lazy day fishing down at the creek, or braiding one another’s hair while reciting their favorite psalms. I always wished that I had a sister. Or even just a friend who’s like a sister.

When I turned 40, I decided it was time to take the Li’l Bonnet Chronicles to a writing group. Maybe they’d encourage me to find a publisher, and maybe my books would be on bookstore shelves. It would be nice to have something to show for my worthless life.

I won’t lie—turning 40 got to me. Our small-town paper ran a classifieds-type ad on the week of my birthday. It said: “Lordy lordy, look who’s 40,” and it had my baby picture in it. I was angry and called the paper, demanding to know who had placed the ad. The editor said the paper never reveals their sources.

But the ad turned out to be a blessing in disguise, because next to it was a small blurb about this writing group. They were called ANACHRON. It was short for “anachronistic.” The ad said the group was interested in fiction that took place in “another time.” It sounded like a perfect match for my Li’l Bonnet Chronicles!

I decided to dress in theme for my first visit to the group. I went to the fabric store and bought some gingham fabric. I also bought a pattern for a Little Bo Peep costume, because it was the closest thing they had. I figured I could just leave out the sheep part.

I arrived at the downtown coffee shop festooned in ruffles and flounce, bloomers edged in eyelet lace peeking out from underneath the hem of my petticoat, my hair done in ringlets like a porcelain doll you’d order from QVC, and of course a big ol’ bonnet, starched to crisp perfection.

I even talked in theme. I talked the way I imagined the sisters would talk in the Li’l Bonnet Chronicles. It was sort of a mash-up between Scarlett O’Hara and the Beverly Hillbillies. I walked up to the writing group and spoke in my new made-up accent.

“Well, fiddle-dee-dee! I do declare! A coffee shop in the big city! City-folk everywhere! Mercy me!”

In my nervousness, I hadn’t noticed until just then that everyone else in the group was wearing black leather trench coats and mirrored shades. They looked like their names were probably Laser and Razor. They carried sleek laptops, whereas I had printed out all of the Li’l Bonnet Chronicles and bound them together scrapbook-style, with themed stickers and everything. Some of the stickers were scratch-and-sniff. I’d spent a lot of time researching scents, and they were supposed to smell like hay.

One of the dudes, the leader maybe, lowered his shades and took an exaggerated once-over look at me. He laughed a mean little laugh and said: “Excuse me, but I think you’ve got the wrong group.”

“Heh heh, yeah!” one of the other interchangeable dudes chimed in. “I think your sheep went that-a-way!” The group rumbled with smirky laughter.

Even though I wasn’t supposed to include the Little Bo Peep sheep-herding staff with my costume, I brought it along anyway, because it was sort of cool, like an Oxford don’s umbrella. I slammed it down on the floor indignantly, to punctuate a point I was about to make. “Now now! Isn’t this group interested in stories from ‘another time’? Isn’t that what I read in the paper?”

The maybe-leader lowered his glasses again, just so I could see him roll his eyes. He let out an extended groan. It was unnecessarily long.

He said: “Look at us! We’re into cyber-punk/urban-dystopian fiction. You know, where the world is dark and smoky all the time, with people living in the sewers, and dudes in black leather jackets and mohawks strut around looking all cool, using cool future-slang, and some shadowy entity is in charge of everything and doing a bad job because they only care about themselves, and there’s a lot of impressive future-technology, and there’s some tough-talkin’ future-chick with tattoos who gives the boys a run for their money, and the rebel good guys ride around on motorcycles and save the world?”

He didn’t say “Duh” after all that, but the look on his face told me he was thinking it.

But you know what? I didn’t want to let them run me off. I’d been doing that for too long, first with the popular kids who wouldn’t let me sit at their cafeteria table, then with the people I met on dating sites who said it was “dishonest” of me to use a picture of Zooey Deschanel as my profile pic. (“But I look just like her!” I’d try in vain to point out. “See? I have bangs!”)

The maybe-leader glared at me skeptically and said, “Oh yeah? What’s it called?”

“Spit it out, Bo Peeps!” said one of the interchangeable dudes who hadn’t otherwise yet spoken, with a snide little snicker. I noticed that, next to his tiny cup of cool-dude espresso, he had also gotten a cake pop.

His snicker emboldened me somehow, and as I said the title, suddenly I hatched a plan.

“My story is called ‘The Li’l Bonnet Chronicles.’”

The dudes all busted out laughing. The maybe-leader jerked his thumb in the direction of the door, as if to say, “Gidouddahere!” all cool like the Fonz.

“Wait!” I threw my hands up as if the situation were very dramatic, as if I really were Little Bo Peep and the cool cyber dudes were about to send one of my lambs off to the slaughter. Maybe, in a sense, they were. “Hear me out!” My Little Bo Peep staff had fallen to the floor in all the commotion, mostly because I had let go of it and that’s just how gravity works.

The at-this-point-probably-leader sighed, as if indulging an annoying younger sibling, and folded his arms across his chest in an “I’m not going to be easily impressed,” Simon Cowell kind of gesture. He nodded, implying that I was to proceed.

I took a deep breath and spoke. “So here’s the deal… There are these sisters. They live on the prairie. They wear bloomers and bonnets. They read the King James Bible and play Widdlytinks, which is a primitive form of Tiddlywinks. Sometimes they fly kites and go fishing and braid one another’s hair while reciting psalms…”

The dudes all groaned and slumped down low in their seats as if I had given them both homework and indigestion.

I went on, thus implementing my plan. “But they’re living like that because… THEY’RE THE ONLY SURVIVORS OF A NUCLEAR APOCALYPSE.”

The slumped-over dudes were silent. They were hearing me out. That one guy reached for his cake pop.

“They’re on the prairie because it’s the only place that’s not contaminated with… fallout.” I was pretty sure that after a nuclear bomb goes off, there’s fallout. I saw a TV movie about it one time. “The grid, and the uh, ‘Net have been wiped out in the blast. All of a sudden, there’s no technology, so it’s back to things like Bible verses and Widdlytinks, just to have something to do all day.”

Most of the dudes were still reverentially silent, but one of them yawned. “Ho hum,” he said. “Been done before.” He rattled off some cool-dude cyber-punk titles. I forget what.

I stammered and struggled. “But, ah… but, um… but here’s the twist: the sisters DON’T KNOW THERE WAS A NUCLEAR BOMB. It happened before they were born! So for all they know, it’s just regular ol’ prairie times, like in the Little House on the Prairie books they read, which were actually written in the modern times, of course. Their parents ripped out the copyright pages with the years on them! The sisters are quite literally lost in time.”

Another dude who hadn’t otherwise spoken asked the question that was on everyone’s minds because humans are all basically a bunch of pervs. “So, uh… are they the only survivors, or like… is there dudes for them to mate with?”

I shook my head sadly, intentionally breaking his heart just because I could. “There’s just the one family, and the dad’s not some sicko who’s going to you-know-what with his blood-kin just to keep the human race going, so basically they’re the last of humankind. When humanity leaves this planet, the last the Earth will see of us are quiet scenes—sisters fishing or flying a kite. There’s already been a bang, but that didn’t kill us all—in the end, we’ll go out with a whisper instead.”

There was silence, then one of the dudes started that slow clap you always see in movies. The others started slowly clapping, too. Then they were clapping fast and loud and hard. Some of them even stood up. The coffee-shop owner came over and told them to settle down.

The slow-clap starter hollered: “NO! WE WILL NOT SETTLE DOWN! THE HUMAN RACE IS GOING OUT IN A WHISPER, SO WE MUST MAKE ALL THE NOISE WE CAN NOW! CARPE THE DIEM!” And then he ran a few steps and busted on through the plate-glass window, leaving the shape of himself there like the Kool-Aid Man. The others did the same, only, since they were all interchangeable, they didn’t have to create new Kool-Aid Man holes in the window; they could just fit through his, easy-peasy.

I have to say, that wasn’t the reaction I was expecting to get to the Li’l Bonnet Chronicles.

The coffee-shop owner glared at me, guilty by association, as I stood there amid broken glass in my Little Bo Peep costume. He said: “You owe me a new window, missy!” I didn’t fight him on this.

I was able to work some extra shifts through the temp agency and pay him back. The cyber dudes were never heard from again, but my guess is they are out on the prairie where it’s safe.