A fruitful day for photography in New York City. 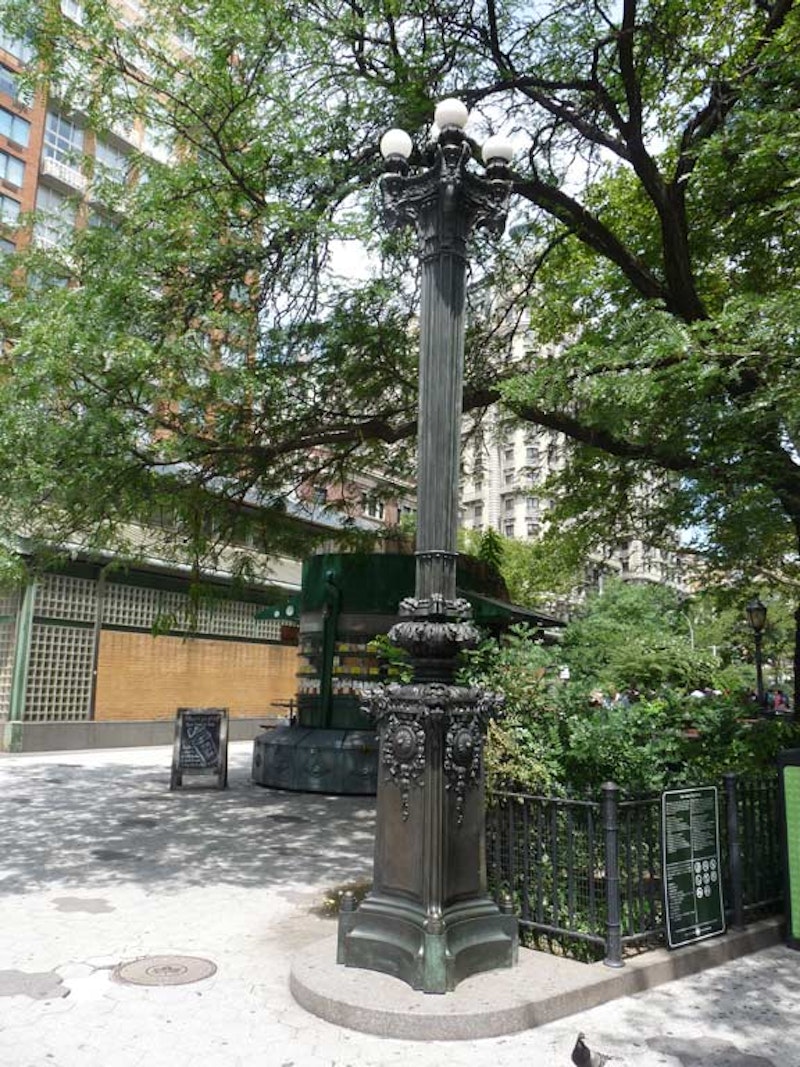 I was seated on a #2 train on a recent Sunday—I was on my way to Pelham Manor. Without a car and not wanting to pay for cabs, I take trains and buses everywhere. My quarry was an ancient street sign—a humpbacked blue and white number that was nearly ubiquitous on most Manhattan and Bronx streets from the mid-1910s to the 1960s—on a narrow strip of the Bronx along a street called Park Dr., the north end of Pelham Bay Park. But Park Dr. is in the Bronx, with the municipality of Pelham Manor north of it. I was going to get the #2 to 180th St., change for the #5, get off at Baychester Ave. and walk there. Simple, right?

Not so fast. At 72nd St., we were informed that a sick passenger had stopped all northward progress on the #2. I wonder why all the sick passengers can’t be moved off the trains and treated on the platforms, but there are probably plenty of reasons why. In any case, my search was at a premature end. I decided to get off and head east through Central Park and then down to Grand Central Terminal. As it turned out, it was a fruitful day for photography. And, later in the week I made that journey to Pelham Manor and found the sign gone, but as I like to say, it was “a day out.”

I’ve seen this post in various spots around the city in old postcards, most often in Times Square where it must have resided for a time. The post somewhat resembles the large lamp that accompanies the Queens-bound entrance lane at the Queensboro Bridge, which opened in 1909. As it turns out the Verdi Square post is from the same era.

Like the Queensboro Bridge it was part of a pair whose partner has been lost—along with a partner, it once stood guard at the steps of the Firemen’s Memorial at Riverside Dr. and W. 100th St. They were removed in the 1980s after being vandalized, and one went into storage and the other was cleaned up, re-bronzed, and placed in Verdi Square in 2004. 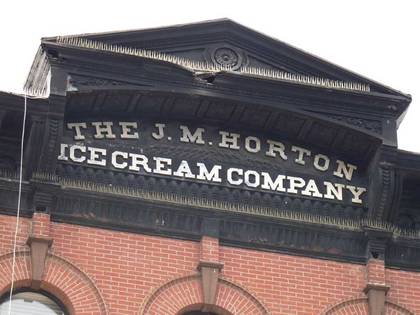 The J.M. Horton Ice Cream Company used to be a big deal. If you look at postcards showing NYC neighborhood scenes in the early 20th Century, a Horton’s ice cream ad can be seen in just about every grocery window—Horton’s was the Sealtest, Breyer’s, Carvel etc. of its day. James Madison Horton (1835-1914), president of the Orange County, NY Milk Association, founded the business in 1870 and by 1916, after his death, company ads proclaimed it the largest ice cream company in the world and was supplying half of NYC’s ice cream retail sales. Horton’s continued to be hand-made during this time and one of its factory buildings was here, at 302 Columbus Ave. off of W. 74th. Subsequently it lost out to mechanized competition, and by 1930 it was absorbed by Borden’s.

The sign appears on the building pediment, which makes it hard to see if you’re not looking for it. Why place it so high? The answer is simple. Until 1940 the 9th Ave. El rumbled above Columbus Ave., and the sign could be easily seen by passing commuters. 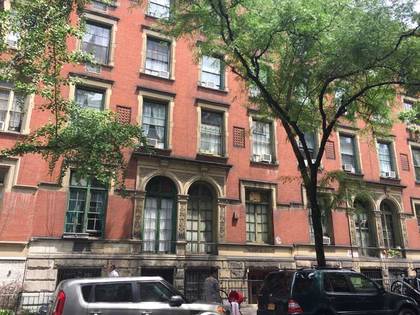 The Upper East Side and E. 74th St. have worlds within worlds of interesting architecture that has Landmarks Preservation Commission protection, but I was drawn to these relatively plain attached brick buildings, #111-117, first constructed in 1888, a banner year for architecture. The design intrigued me, with basement entrances and large, casement windows that imitated doorways. The apartment I grew up in, in Bay Ridge, had an adjoining living room and bedroom, but separated by what my parents called “French doors” that could be closed when someone wanted to sleep and others were up. These windows reminded me of those doors. 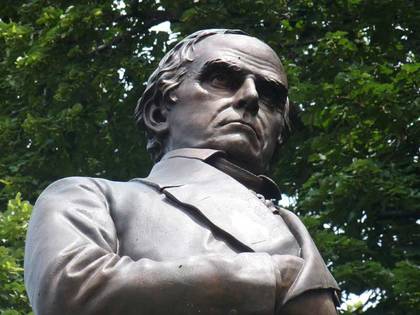 Entering Central Park at 72nd St. and heading past Strawberry Fields and West Dr., I passed the monumental memorial to Daniel Webster by Thomas Ball, first dedicated in 1876. While a facility with the press are important skills for any modern politician, oratory abilities were even more prized during the 19th Century, when there were no microphones or spinmeisters—just a leader with a booming voice and powerful rhetoric. Daniel Webster, Senator from Massachusetts and later, Secretary of State, was likely one of he more eloquent Congressmen who ever lived. Webster helped maintain the Union during the 1820s and 1830s when the question of slavery threatened to rupture it; the Civil War may well have broken out earlier if not for his efforts.

Thomas Ball’s 1876 enlargement of a statuette he produced in 1853 is inscribed with one of his famous quotations from an 1830 Senate debate: “Liberty and Union, now and forever, one and inseparable!” 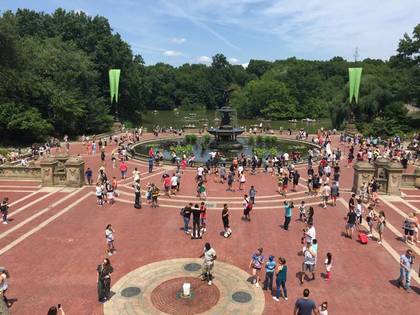 This view of Bethesda Fountain on a busy Sunday afternoon from the Terrace Bridge has always reminded me of 16th-Century Dutch painter Hieronymus Bosch’s Garden of Earthly Delight. The Bethesda Fountain and Terrace, at the north end of Central Park’s Mall at about 72nd St., has long been a favorite meeting place in the park. Emma Stebbins’ statue, Angel of the Waters, is named for an angel in the Gospel of John who touched the waters at Bethesda in the Holy Land, giving it recuperative powers.

Central Park’s creators, Frederick Olmstead and Calvert Vaux, with the assistance of sculptor and architect Jacob Wrey Mould, made the Terrace a spectacular complement and perfect prospect for the fountain and lake behind it. The railings are exactly the same as they were in 1864. But by the 1970s the Terrace and Fountain were damaged by general neglect, and scarred with graffiti; the fountain was turned off and filled with beer cans, hot dog wrappers, prophylactics and whatever else didn’t get cleaned up. Between 1983 and 1987 much of the Terrace was closed, with the balustrades and railings shipped off for restoration work. Eight million dollars was spent restoring the Terrace and Fountain to what they looked like when originally designed. 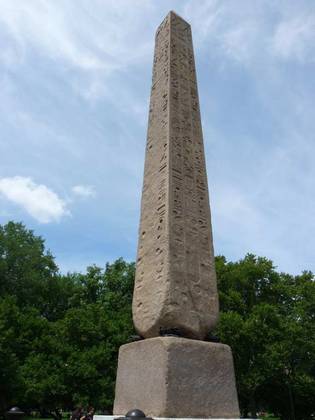 On my Flushing Meadows-Corona Park tours, I often mention that Cleopatra’s Needle is the oldest man-made object in NYC when we pass by the second oldest—Flushing Meadows’ Column of Jerash, a gift from Jordan in 1962, which dates to the first century AD. The Needle is much older, and dates to before Cleopatra’s time. It was commissioned by Egypt’s Pharaoh Thutmose III in 1425 BC; one of a pair at the Temple of Heliopolis. Hieroglyphs, whose translations appear on four plaques surrounding the obelisk, praise Thutmose and other emperors.

By the first century BC the obelisks had toppled and were in partial ruin. The Roman Empire transported them to a temple dedicated to Julius Caesar in Alexandria, and added the crab-shaped supports at the base. In 1869 Egypt gifted one of them to the USA and after an arduous transportation and installation process, what became known as Cleopatra’s Needle was raised on East Drive behind the Metropolitan Museum of Art in 1881. 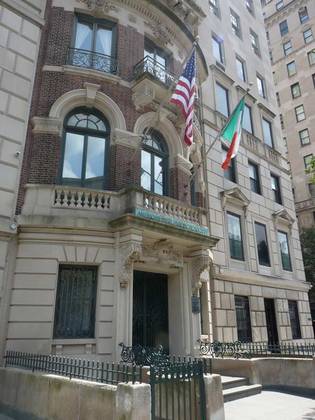 The American Irish Historical Society, 991 5th Ave. at E. 80th St., was founded in Boston in the 1890s and has served as a center for Irish-American culture and heritage. It relocated to NYC in 1904 and was championed at the time by President Theodore Roosevelt, who claimed Irish blood on his mother’s side. “Yankee Doodle Dandy” George M. Cohan was also a prominent member. The Society moved to its current home in 1940. Its library houses over 10,000 historic volumes as well as late 19th-century newspapers and publications, stored under climate-controlled conditions, available for viewing by appointment via the Society’s website at aihs.org. 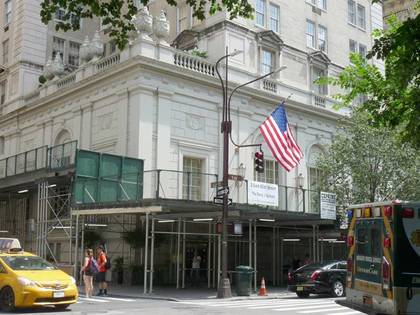 You’re looking at an increasingly vanishing lamppost specimen located at 5th Ave. and E. 61st St. Slotted Donald Deskey lampposts, designed by the interior Radio City Music Hall industrial architect, began appearing on NYC streets in a pilot program in 1958 and by 1962, were beginning to make major inroads, especially on expressways. The main feature was a shaft with two slots, enabling add-ons like additional masts, some in different sizes, and stoplights to be installed easily.

In 1965, special, bronze-colored Deskeys with two S-shaped masts were installed on 5th Ave. between E. 32nd and E. 61st Sts. They replaced the ornate cast-iron twin lamps that had first appeared in 1890.

SLECO, which manufactured the Deskeys, stopped producing them in the 1970s, and so while hundreds still remain, new ones haven’t appeared for decades. On 5th Ave., when one of the Specials fails, it’s replaced by whatever the Department of Transportation has available in its lamppost yard in Sunnyside.