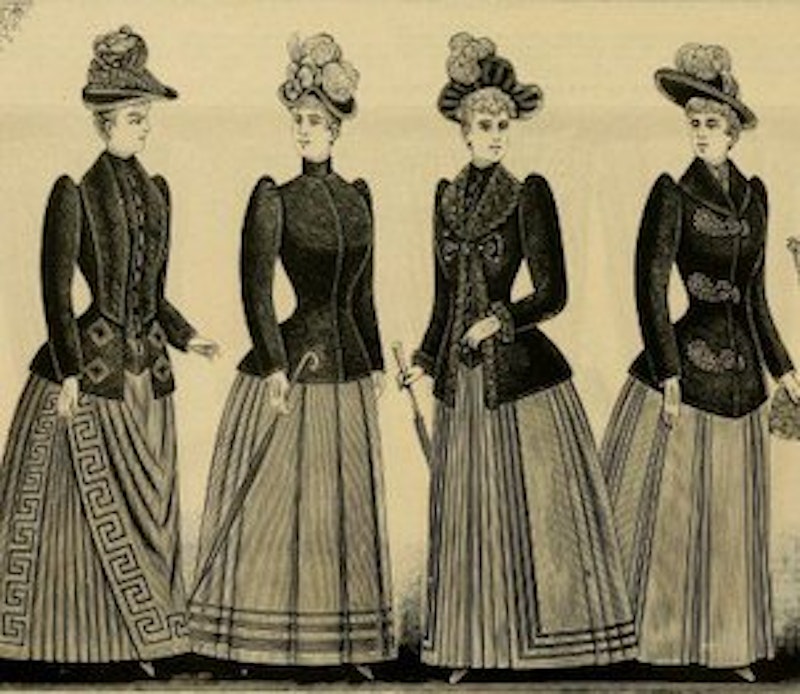 A vision confronted me in Indianapolis the other day as I crossed the street to the hospital for my treatment: two young women and one middle-aged woman crossing the street together, presumably two daughters and a mother. They had what you’d call a “Middle Eastern” appearance. And each was covered head to toe in neutral-shaded garments and wore a tight head covering.

Bound though I was for grim medical business, I nonetheless stared at the trio. And not in outrage, either. No, not from Harris any blustering about how sharia is coming to the Hoosier State.

Rather, I was startled by the women’s elegance, especially in the context of the native-born white and nominally Christian American women on the street around them. What a crew these last made up. Obese, or at least heavy, to a one; tattoos undulating across their rolls of fat; obscenely underdressed in their halter tops and shorts; waddling in their flipflops and sweating like oxen; sucking on Juul contraptions or else chewing huge cuds of gum.

Paleoconservatives like me were withering in our contempt for pundit Bret Stephens when he opined in a column a couple of years ago that immigrants were in fact superior to our native American lumpenproles, and that maybe it was the latter, and not the former, whom the Queens pimp should deport. But seeing juxtaposed those three smart-looking, modest Muslim women with our native heartland slatterns made me wonder if he didn’t have a point.

More seriously, now that liberalism is in retreat, I wonder whether we might not see a return to restraint in female comportment and attire. I propose making its reestablishment part of the traditionalist conservative agenda “going forward.”

The China/NBA controversy has bumped the Hong Kong protests back into the spotlight. What I’ve been waiting for, however, is a concerted traditionalist conservative defense of the Chinese government’s behavior in Hong Kong. So far, to my chagrin, I haven’t seen it. Our far-right intellectuals are failing to rise to this challenge.

Admittedly, we’re facing a complicated situation here. On first glance China, with its rampaging market culture (the country is even busily building itself the sort of car-based suburban sprawl culture that we traditionalist conservatives despise) isn’t worth our defense. But at the same time, China is, at its core, a proudly self-interested ethnostate of the sort that we trad-cons tend to admire. (Unless it’s packed to the rafters with Jews and located in the Mediterranean basin—but that’s an issue for another time.) It bases its legitimacy in its people’s long and illustrious history, and in the mandate of heaven—any superficial overlay of Marxist-Leninist, or even Maoist, doctrine aside.

There is much for paleocons to admire—with due reservations, of course—in China. And that’s not to mention the principle of good governance that’s at stake here. The maintenance of public order is fundamental to the well-governed state, and that state is well within its rights in suppressing—peacefully if possible, brutally if necessary—any secessionist or even disruptive tendencies. At least, that’s what our opinion leaders tell us as the Macron government smashes France’s Yellow Vest protestors. And it’s what the apologists for the corrupt neo-liberal regime in Washington DC tell us when that regime puts down civic insurrections here in the United States, in particular those in which my beloved blacks figure.

So no, thank you. I won’t be “piling on” China. Imperfect though it is, its government is, in Hong Kong, acting in accordance with eunomia, the principle of good order. If there’s a more worthwhile guiding principle for a government, I have yet to see it. That principle should be at the core of our paleoconservative idea of statecraft, and I’d like to see my fellow right-wing intellectuals defend it.