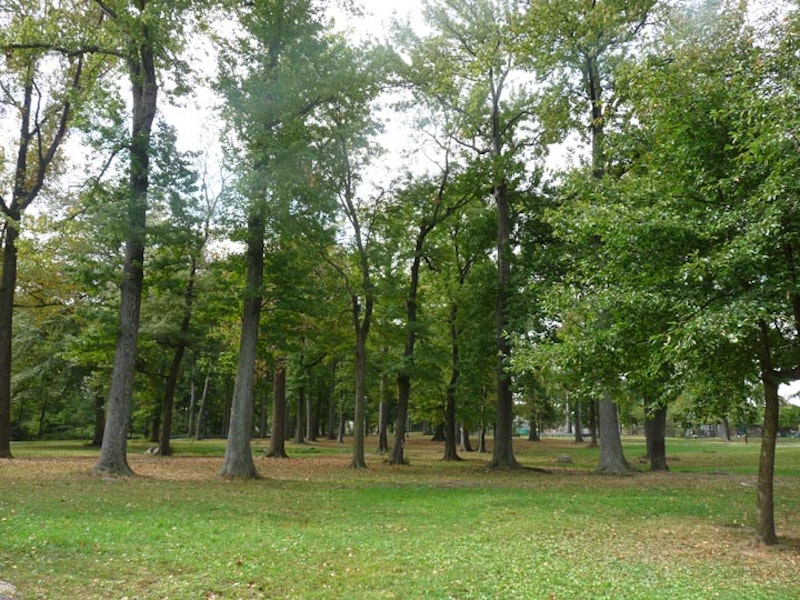 Since my lair’s in Little Neck, I see my own “division,” which I consider northern Queens, downtown and mid-Manhattan, and northern Brooklyn, quite a bit. And I think of southern Brooklyn as well as mid-Queens and southern Queens out of division, but still in conference, i.e., I see them now and then, but not as often as the neighborhoods in my own division. Bronx, northern Manhattan and Staten Island, though, are in the other conference—I see their neighborhoods not as often as that, and sometimes very rarely. Today’s explorations, in Pelham Bay, were definitely “out of conference” since the last time I walked around in Middletown and Pelham Bay in the Bronx must have been seven or eight years ago. Fortunately, nothing around here seems to change much from year to year, except encroaching bad architecture.

Most New Yorkers would likely immediately respond “Central Park” when asked what the largest park in New York City by acreage is. There are, however, several parks in NYC much larger. Both Van Cortlandt Park and Pelham Bay Park, in the Bronx’s northeast corner, are over double Central Park’s size.

At over 2,700 acres, that title of NYC’s largest park belongs to Pelham Bay Park, which stretches from the old Bronx neighborhood of Middletown on the south to the Westchester County line on the north, and from the Hutchinson River and its namesake Parkway on the west to Eastchester Bay and Long Island Sound in the east.

The Park contains large salt marshes, home to egrets, raccoons, blackbirds, wrens and marine life such as sticklebacks and seahorses; predators like harbor seals and ospreys (fish eagles) feast on the fish and crustaceans. On land, white tailed deer and wild turkeys have been spotted. The Kazimiroff Nature Trail, on Hunter Island (now a peninsula attached to the park by landfill) as well as the Siwanoy and Split Rock nature trails provides easy access to the park’s wilder areas. The eastern section of the park facing Long Island Sound had been named Orchard Beach as long ago as 1905 for the orchards that grew on local estates. NYC Parks Commissioner Robert Moses rebuilt Orchard Beach into its present configuration in 1936, attaching Hunter Island and creating one of NYC’s two largest parking lots (along with the one in Riis Park), and added more territory in 1947 by filling in Twin Island. 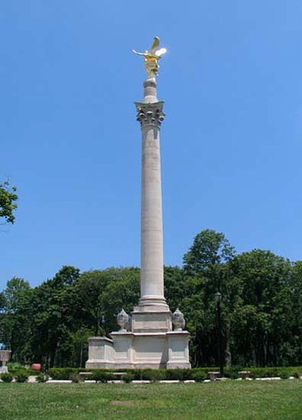 A beautifully gilded statue of “Winged Victory” tops this towering column located in the northern section of the southern part of Pelham Bay Park, along the approach road connecting the New England Thruway to Pelham Parkway, near where it crosses the Hutchinson River and becomes Shore Rd. The Corinthian column is surrounded by a landscaped plaza and raised paved terrace in the streamlined Moderne style popular when the Memorial was designed by architect John Sheridan and sculptors Belle Kinney and Leopold Scholz in 1932. Limestone reliefs depict marching soldiers and the paths leading to the memorial are lined with lavish floral beds and hedges, but the star of the show is the brilliantly gold “Victory,” 18 feet tall and weighing more than three tons. The Memorial was renovated from base to tip in 2001 after decades of weathering and vandalism. 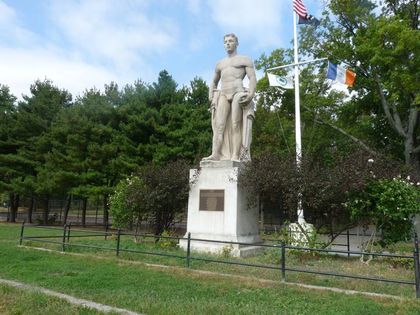 I’d heard of Pelham Bay Park’s Rice Stadium on Middletown Rd. facing Kennilworth Pl., constructed in the early-1920s and demolished in 1989. It was built with the aid of a $1 million grant from Julia Rice, the widow of musician, lawyer, publisher, chess expert, submarine pioneer, and president of the Electric Storage Battery Company Isaac Leopold Rice. Mrs. Rice was the founder of The Society For the Suppression of Unnecessary Noise and organizer for Sane and Safe Fourth of July. After years of deferred maintenance, the city deemed it necessary to demolish the stadium; it was replaced by the Aileen B. Ryan Recreational Complex, named for a local assemblywoman.

Does any trace remain of old Rice Stadium? Yes. The Louis St. Lannes limestone statue “American Boy,” installed in the Rice Stadium grandstand in 1932, was retained by the Parks Department, restored in 2002 and reinstalled in 2004.

Streets in the vicinity of Rice Stadium were laid out in the early-1920s, about the time the stadium was constructed, and many have names honoring physicists such as Ohm, Ampere, and Watt, as well as Radio, Research and Library. Recall that Isaac L. Rice was president of the Electric Storage Battery Company. 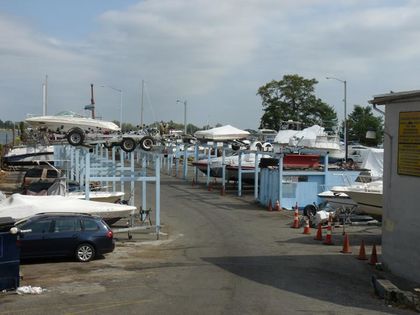 What’s billed as the Evers Seaplane Base can be found at the east end of Griswold Ave. More a marina than a seaplane base these days, it has been run by two men since its founding in the 1930s: first by Carl Evers and then by his son, Charles, now well into his 70s. It was a busy seaplane base in its early days, but since the 1960s has been a harbor for yachts and other pleasure and fishing vessels. Charles Evers still owns a seaplane of his own and takes it for a spin around Eastchester Bay now and then, and the base has been used by other seaplane enthusiasts such as Jimmy Buffett. 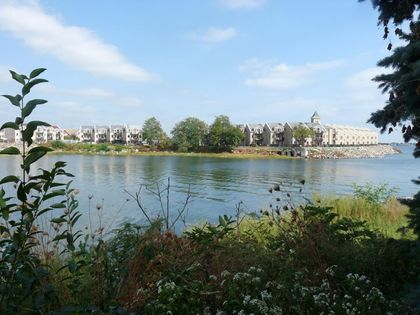 Palmer Inlet, a little-known arm of Eastchester Bay, can be seen here along with several water-facing homes along Griswold Ave. Though much of the area south of Pelham Bay Park; known as Spencer Estates, has water frontage, there’s little in the way of public access; the idea that trails in northern Pelham Bay Park, south of Shore Road and Pelham Bridge, vouchsafe sufficient public access. 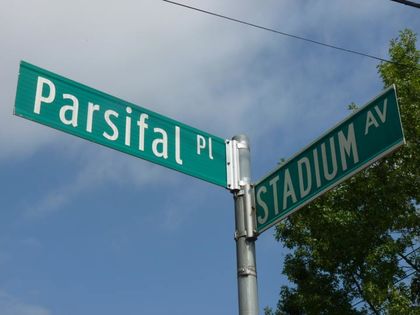 NYC is marked by clusters of streets with a theme-based naming scheme. Many of the northeast Bronx streets are named for early NYC mayors beginning in the 1600s; Brooklyn Heights has a fruit tree scheme; Staten Island has classical composers in Clifton and astronauts in New Springville. In the Bronx’s Spencer Estates, just south of the Isaac L. Rice-inspired electronics street theme, there’s a cluster of streets such as Parsifal Pl. that are named for characters or place names in Wagner operas or Wagner family members, including Lohengrin, Valhalla, and Siegfried. This was apparently the idea of Eugene Rosenquist, president of the Westchester Electric Light Company, who owned the estate in the area through which these streets run. 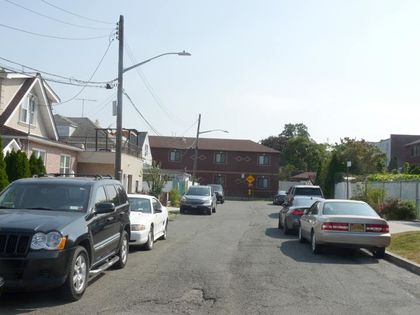 After crossing the Bruckner Expressway over the Waterbury Ave. footbridge, I had a slice at Louie and Ernie’s on Crosby Ave.. A block away from the pizzeria is a Bronx anomaly that can only be explained by looking up older maps: the presence of a dead-end “B Street” on Baisley Ave. west of Crosby. 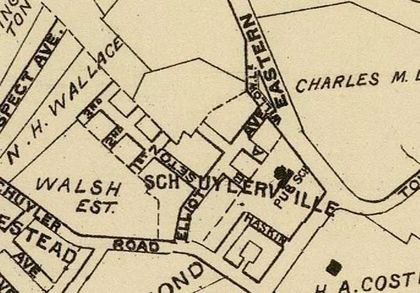 On this Hyde map, circa 1910, many of the streets shown are still in existence, but with different names; Fort Schuyler Rd. is Tremont Ave., Eastern Blvd. is Bruckner Blvd., and Elliott is Baisley. And, as it turns out that the dead end now a piece of Hobart Ave., was formerly A St., which makes the presence of a B St. more logical. The roads marked Seton and Haskin have disappeared off the map. According to Bronx historian John McNamara, A St. went through a period as Amsterdam Ave. before becoming a dead-end extension of Hobart Ave., which otherwise runs between Baisley and Zulette Ave. and further north, between Middletown Rd. and Continental Ave.. A numbered sequence, 1st, 2nd and 3rd, are long gone.

Another “B” I can’t explain is Port Richmond Staten Island’s Ave. B, which doesn’t seem to ever have had an accompanying Avenue A or C. Me, I always got an A in geography instead of a B—in grade school.