The Day I Was Mickey Mouse

"I was Mickey Mouse, but just for one day. Not because I'm good with kids, but because I fit the suit." 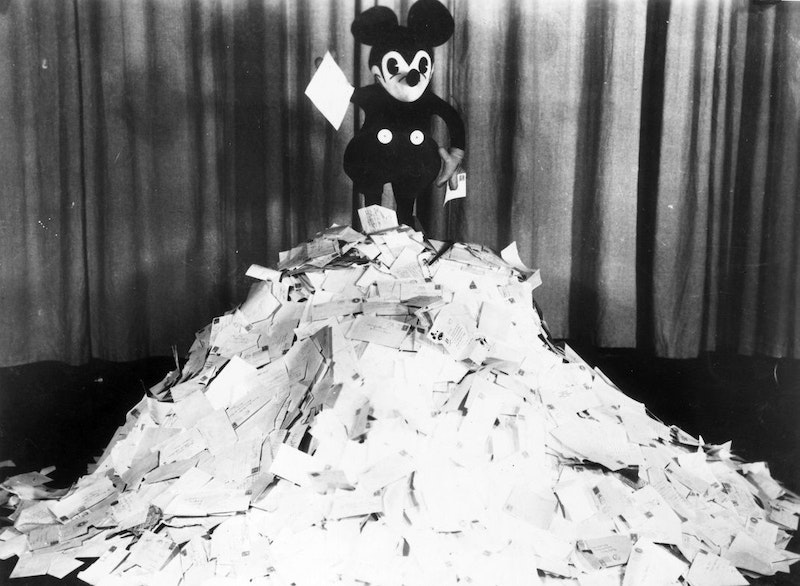 My usual job at Disneyland is in the background. I carry around a bucket of grease, and I oil up the rides when they get creaky.

"Oh man, we've got a real squeaker over in Never-Never Land," my boss will radio to me from the underground command center, the secret beating heart of the park. So I get in my golf cart and putter over to the Peter Pan ride, where the attendant who complained, or who reported the complaint, will point out for me exactly where that particular ride is wearing thin.

With heavy gloves on, I rub the lube over the ride's sore spot. Yes, the obvious thing to think of here is something perverted, and yes, sometimes I think that, but when you do a thing every day it loses both the glamour and the humor.

"Oh!" people exclaim when I tell them where I work. They ask what I do, and they inevitably look crestfallen when I say I'm a mechanic who performs preventative maintenance on amusement park equipment. They want me to tell them I design roller coasters, they want me to say I'm Mickey Mouse.

Here's the strange thing, though. I was Mickey Mouse, but just for one day. Not because I'm good with kids, but because I fit the suit.

He got too big for his britches. No, he really did. It wasn't just the demands; he got too fat. The hot weather made him stress-eat too much. His assistants brought him funnel cakes, two at a time.

The day his Mickey-pants no longer fit was the Fourth of July, a big celebration with Aladdin and Jasmine flying in over the fireworks on a "magic" carpet that was actually a small plane. There would be lots of families, and they needed another Mickey quick.

"We don't have time to put out a job ad! The families are in the park NOW!"

I happened to be taking my lunch in the break room at the command center. I forgot to bring my Dave Ramsey self-help book about why debt means you’re a failure so I was just reading some dumb employee pamphlet. I think it was about 401k plans.

One of the bosses pointed at me. "You! How tall are you, and how much do you weigh?"

I told them—I'm not going to tell you, because what next, you'll want to know my Social Security Number?—and they said I was almost perfect.

"You're maybe one pound over—don't eat that donut!"

I froze with the donut in mid-air. My mouth had been open wide to take a big bite. It was a chocolate-covered donut, that kind that comes in a pack out of the vending machine. It's my favorite. I felt conflicted, but when the boss says freeze, you freeze.

"Put... that donut... down," the boss repeated, and I obeyed, but grudgingly. And with exaggerated slowness.

They made me run a quick lap in the employee gym, then they put me in the suit. They let me take a shower first. It fit like a glove, and for a second I thought maybe I had discovered my life's true calling.

"Okay, do you have any acting experience? Are you good with kids?"

I tried to say "No" and "No," but my voice was muffled through the giant plush mouse head. So I shook my head "No" instead.

"That's good—you're communicating without words! That's just what you need to do out there. Don't try to talk because it will creep the kids out. Just hug them and wave."

This I thought I could manage.

The erstwhile Mickey who had gotten too fat was still there, weirdly enough. He sat in the corner and sulked.

I waved at him—not in a taunting manner, just because he looked lonely over there. But he took it the wrong way. "Hey, fuck you, man. I could’ve gone to Juilliard."

I just stared at him through the eyeholes of my mask.

One of the bosses said, "C'mon, let's go! The kids are waiting for Mickey at the castle!"

I took a step in one of the big clown shoes. It was harder than it looked, and I bet the fat old Mickey was gloating. Then I took another step.

"You're a real natural," one of the bosses said, and I couldn't tell if he was being sarcastic.

We took the elevator up out of the underground command center, then stepped through a door into daylight.

I’d taken maybe three awkward steps in the jumbo shoes, as if I were walking in molasses on the moon, when I spotted some kids.

I felt a catch in my heart, and clutch in my throat. I was an only child, and never had many friends. After vocational classes in high school, I was mostly around machines. I’ve never had a girlfriend or boyfriend. I suppose I’m what the kids call “incel,” although they called it something else back in my day. They called it “being a loser.” I have a cat, though. I spend all my vacation days at home because I don't like to leave my cat. He's the only thing that would miss me if I were gone.

"C'mon, what're you waiting for?" one of the bosses hissed, his teeth clenched in a tense fake smile.

I stumbled forward, galumphing toward a cluster of children. I extended my arms wide, clubby white glove hands at the end of each one. A toddler screamed.

I tried to look at my bosses to get a clue what to do, but this unfortunately required me to rotate the whole giant mouse head, a big-eared planet spinning on its axis, all the way around. I had no peripheral vision, and wasn't used to having to turn that much to see behind me. I got a little too much momentum going, and the head kept turning when I wished for it to stop. So I fell. I crashed, mouse-head first, into the sidewalk. The toddler girl screamed some more and a baby started to cry. I felt my bosses at either side of me, pulling me up by the arms.

One of them said, "See, kids? Mickey's okay!" I mustered up an enthusiastic wave to show them I was fine, but the mouse-head was tilted at an eerie angle, and the eyeholes no longer lined up with my eyes. Still I remembered my mantra: "Just hug them and wave... just hug them and wave..." and I nervously lurched at the sounds of the children screaming and crying. I waved frantically at the noises.

My boss pulled me back and said, "Enough, ENOUGH!"

They gave me one more chance.

"Okay, we've got a two o'clock in Tomorrowland. We'll get you there early; you don't have to walk. Just stand there. Just hug them and wave. And don't be creepy this time."

I wondered how I couldn’t be creepy this time. I mean, I couldn’t have gone to Juilliard. I’m not that good. The old fat Mickey won kids over with no words at all, with his movements, with his body. With his soul. I found myself sitting there in the break room with a newfound respect for mimes.

I remembered something I heard once about how kids are like snakes and can sense fear. I thought about all the times I've seen a baby being held in line at a grocery store, the parent facing forward and the baby facing me. I always try to make the baby smile, to make a silly face when no adults are looking. But it never works. The baby just peers at me in an obscurely pitying fashion. It's as if they can see into my soul, and they know—I’m worthless.

But I tried again at Tomorrowland.

I stood there, with my bosses on either side in case I decided to take another face-plant into the asphalt. I saw kids approaching. From far away, they looked excited. Some of them held balloons. A few of them skipped. They were going to see Mickey, deus of the Disneyland fauna. I thought about the phrase "deus ex machina" and wished for one to appear here and solve all my problems. But there was no kind of deus here. And the kids sensed it.

Once they got maybe a few yards away and I spread my arms wide, they stopped dead in their tracks. I looked at them through the eyeholes, and I could see blackness around them. I could hear my heart beating in the costume. Their parents nudged them forward and fiddled with cameras. But the kids stayed where they were, and their eyes said, "Impostor."