I went to college in the Brooklyn Boro Hall area between 1975 and 1980, long before my Forgotten New York was conceived. 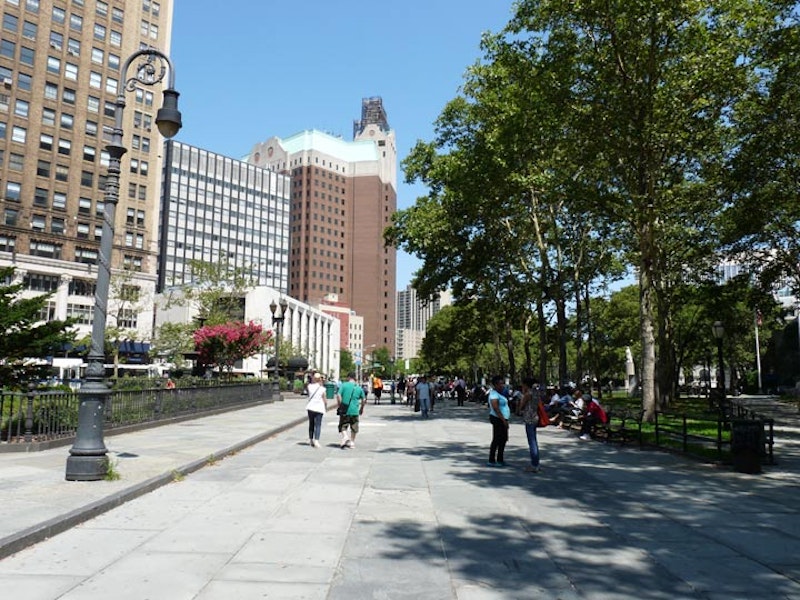 Only the high transit fares and a temporary job are keeping me from roving all over town most days of the week, pointing a camera at anything remotely interesting. However, I do try to get out whenever possible and on this day, I was traveling in one of my favorite parts of town, the downtown Brooklyn area. There have been ForgottenTours in Brooklyn Heights and DUMBO the past couple of years, yet I’ve merely scratched the surface.

I went to college in the Brooklyn Boro Hall area between 1975 and 1980, long before my website Forgotten New York was conceived, yet I’ve always been interested in historical oddities. I must’ve shown such interest outwardly even then, since a then-girlfriend whom I met at the school gave me a copy of Clay Lancaster’s Old Brooklyn Heights, from Dover Publications (when Dover still printed historical pictorials) for my birthday in 1982. It’s the Bible of Brooklyn Heights architecture.

Getting off the train at the IRT Boro Hall station, you see a pedestrian path leading north, pictured above, from Joralemon St. to the junction of Court and Montague Sts. on the west side of Brooklyn Boro Hall. This path is a remnant of Fulton St., which is a very old road going back to the early-1700s as the British forged “King’s Highway” that reached from what was the Fulton Ferry landing south along what is now Old Fulton St., Cadman Plaza West, Fulton St., Flatbush Ave., and the modern Kings Highway all the way to Midwood in the heart of Brooklyn.

When Cadman Plaza was built in the early-1950s, this section of Fulton St. was closed to traffic and turned into a pedestrian path. Creating Cadman Plaza closed several streets and razed nearly 100 buildings. In addition, the Fulton St. El also ran along this section of the St. until it was eliminated west of Rockaway Ave. in 1942. Other sections were later torn down, until only the part that runs along Liberty Ave. in Ozone Park remains today. 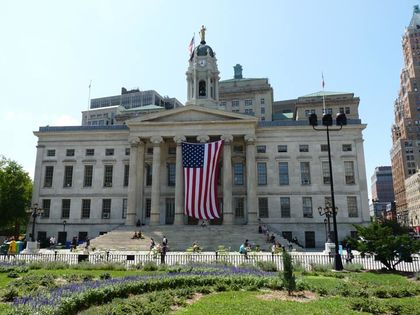 Brooklyn’s City Hall was originally built in 1848 in the Greek Revival style in Tuckahoe marble, designed by architects Gamaliel King and Calvin Pollard. In 1898 it was “demoted” to Borough Hall as the county of Kings was absorbed into Greater New York. That same year it received its present cupola and gilded statue of Justice; the originals were destroyed in an 1895 fire. There was a push to demolish the structure in the 1930s as some critics felt its design wasn’t sufficiently attractive.

The depression and war ended whatever plans there were for a new Boro Hall, and in 1966 the building received designation by NYC Landmarks. The sign from the opening credits of Welcome Back, Kotter that read “Welcome to Brooklyn, 4th largest city in America, Hon. Sebastian Leone Borough President” (1976) currently hangs in the lobby of Borough Hall. And, a tile representation of Boro Hall can be found on the walls of the #2/3 IRT platform underground. 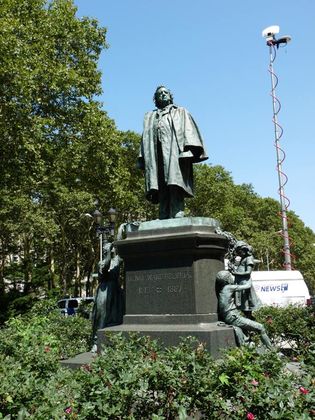 There are two monuments to famed 19th-century preacher Henry Ward Beecher (1813-1887) in the Boro Hall-Brooklyn Heights area, the one seen here and one at Beecher’s church, the Plymouth Church of the Pilgrims on Orange St. Beecher preached from the church’s opening until his 1887 death. Beecher, a lecturer, writer and pastor, attained a pre-eminence almost equal to Abraham Lincoln’s at the height of the Civil War, and even endorsed products, which well-known ministers did in the era. The pastor staged mock slave auctions to call attention to the evils of slavery; his sister, Harriet, wrote Uncle Tom’s Cabin. Beecher was later involved in a sex scandal, accused of committing adultery with the wife of a trusted associate. It caused irreparable damage to his career, though a jury found him not guilty.

This statue, sculpted by John Quincy Adams Ward, was unveiled in 1891. The accompanying figures are said to represent his abolitionist stance as well as his love of children. Reportedly, family members took issue with the likeness, saying it didn’t resemble the preacher. The statue was placed in its present Cadman Plaza position in 1959. 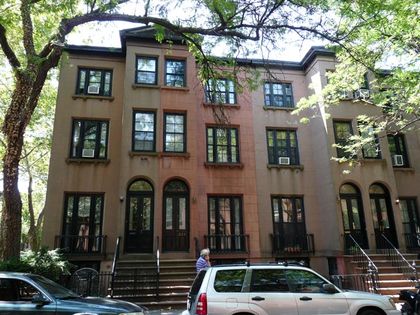 I wish I knew more about #220 and #222 Kane St. at Tompkins Place. The windows have been modernized, but I’ve always been attracted to floor-length. Kane St. received its name fairly recently. It was renamed (from Harrison St.) in 1928 to honor former Brooklyn alderman and police chief James Kane. Before the 1970s, streets were routinely renamed (cf. Stone Ave. becoming Mother Gaston Boulevard and 8th Ave. becoming Frederick Douglass Blvd.) but since then, streets have generally been given an additional St. sign, but the older name tends to stick. There was a push to rename Fulton St. in Brooklyn for Underground Railroad heroine Harriet Tubman, but she got a few St. signs appended under the ones showing “Fulton St.” in 2005 and that’s about it.

On the other hand, “126th St.” signs were removed recently and new “SeaverWay” signs were installed honoring Mets legend Tom Seaver, so there’s really no official formula on how these re-namings are done. 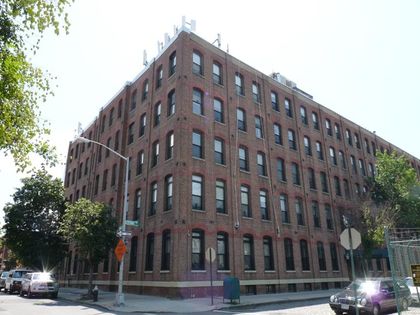 I enjoy brick factory buildings that have been converted to residential, such as #1 Tiffany Place at Kane St., west of the Brooklyn-Queens Expressway. According to legend, this was once one of Lewis Comfort Tiffany’s glassworks factories, but recent research by Brooks of Sheffield suggests the street was named for 19th century Brooklyn alderman George Tiffany. As for the factory, it belonged to Walther and Company, which made “fancy paper” used for wedding invitations and the like. This was an early condo pioneer, since it was “converted” in 1986. If you’re searching for a real Tiffany factory, look no further than 43rd Ave. and 97th Place in Corona up to a short time ago. The factory was razed to make way for a new school, but glass fragments found in the rubble have been used to create an art piece in the school lobby.