Whiteout in a Heat Wave

Were the seasons always this confusing? 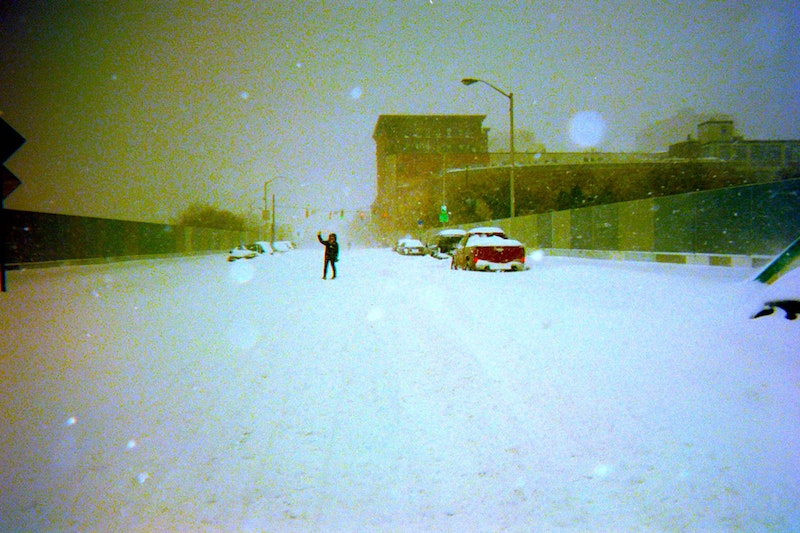 The weather wasn’t always this confusing. Not bad—not pummeling us yet—just unpredictable. It’s rained nearly every day for a month here in Baltimore. Last year, summer started on May 4, the second day of the Maryland Film Festival, and I was talking to Gram about Genderbende outside in the blinding sun wearing all black and bug-eyed sunglasses like a misplaced insect. In 2017, summer began on June 1 when I installed my AC unit. Summer always begins the day you installs your AC unit. I got a new one this year. I’m not sure if it’s any better than the one I had the past three summers. It had fewer BTU’s. It was impressed upon me, early in my 20s, that an AC unit “over 10,000 BTU’s” was powerful enough to stun a Home Depot employee who thought they were talking to a civilian. In my recent experience, I’ve found that’s not the case.

My house still bakes on top of a hill in the summer. Another would be overkill. I remember the first months of 2018 when it was icicles and single digits and energy bills competed for rent. In 2015 too, a brutal winter, my hands frozen and immobile, trying to open the door of the Copycat and feeling nothing. I lost the yellow jacket I wore that night. Someone must’ve thrown it away.

We had one proper blizzard recently, in 2016, but God popped off early on this decade. Twin blizzards back-to-back in the first two months of 2010, an event no one forgets if they were there to live it, fresh snow whipping around seven-day dunes in the middle of St. Paul St., the arteries of Baltimore clogged. But the one that no one really remembers happened in December 2009, the day after school let out for winter break. It was a blast. I remember that happening when I was very young, one of my first memories, the blizzard of January 1996. My parents were stranded in Florida and unable to fly back in while nanny Anna and family friend Lisa watched my brother and me, where snow dunes too covered Tribeca, and we walked slowly through the path of these enormous mounds, descending an empty comic book store and looking for Batman. I don’t remember much else before that. Twenty-three years ago now—no, more than that. Just a little.

The summer was always this hot. Wasn’t it?

I remember being forced inside before it was scary when the military sprayed the streets of Manhattan for West Nile Virus, in the summer of 2000, when I went to Coney Island and played with motorized plastic fans and listened to ABBA on my Walkman. I remember eating orange ice cream in a park somewhere far away, 10 miles uptown, or sideways, I didn’t know, I don’t know. I won’t know. Same “summer camp” as the year before—and maybe the year before that—the one run by two sweet women suited to the job but a bit out of their element, a bit absent-minded. Not always, not when it mattered, except a year later when they left a kid at the pool. They didn’t know what to do. My brother and I couldn’t go back, weren’t allowed, parents screaming and I was upset, but in the end, this promised me Zone of the Enders, an M-Rated game. This didn’t make any sense, but I’m glad. It was right.

I thought I didn’t remember any of that—that weather stuff—happening before. Ten, 20 years ago—no. There were plenty of hurricanes, blizzards, blackouts, blistering summers, and brutally cold winters. I remember in 1997 lines around the block of a movie theater beneath—or it was it just near?—Grand Central station, people waiting to see Disney’s Anatasia, a fantasia me, my brother, and our nanny Anna weren’t able to see that night. I remember the lights and lots of snow. I was looking for an old video last night and was unable to find it on YouTube, after half an hour in a panic that it might’ve been pulled by a friend, but I found it via Facebook’s surprisingly easy to access user history (unlike Twitter—how does everyone find old tweets? I can’t). But I found the video in a post from 2013, and I noticed just a week before an article I’d forgotten I’d written, about the risk and ethical considerations of having children when climate change predictions are so dire. I didn’t remember it starting that early, but of course it did, it was 2013—it wasn’t 2010 any more.

Another new climate apocalypse article, this time from The New Yorker: “Four years ago, I wrote an article for this magazine about a little-known fault line just off the coast of the Pacific Northwest that periodically produces earthquakes of magnitude 9 and greater—which, in turn, produce tsunamis equal in enormity to those that struck Indonesia and Japan. When that fault line next unleashes a full-scale quake, it will affect some hundred and forty thousand square miles of the West Coast. The impact of the tsunami, meanwhile, will be more localized but more thoroughgoing: it will obliterate everything inside a skinny swath of coastline, seven hundred miles long and up to three miles deep, from the northern border of California to southern Canada. That region is known as the tsunami-inundation zone, which is exactly what it sounds like: the area that, according to seismologists, will be completely underwater when the wave arrives.”

I remember reading the article Kathryn Schulz wrote four years ago and thinking, Thank Fucking God I don’t live on the west coast. For a number of reasons—but, this was the biggest. Earthquakes and tsunamis. What does a 7.1 feel like? I’ve only ever felt one earthquake in my life, in 2011—on the phone in New York with my dad in Baltimore, him feeling it hit south exactly one minute before I felt it rock my bed up north. That was a 5.8, a lot stronger than I expected. I don’t know anything about earthquakes. Once again, thank God. And I do thank Him, because I like the arbitrary framing of the seasons on the East and the way it marks months just as meals mark hours and cigarettes mark minutes. I remember now also too, the blizzards here in early 2003 that left my family briefly stranded, then returned, then back to Baltimore again, visitors still, leaving home already. The weather was always this confusing.