A car, an empty thruway. 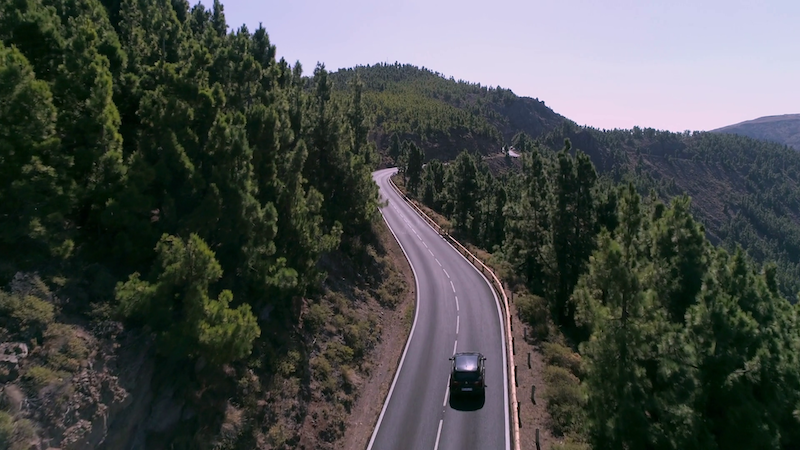 I’m 57. Not long ago I spent some time near a younger woman. She has black hair and skinny arms and legs—“my twig-like arm,” she said in passing, because she likes to turn a phrase. She talks a lot. And not long ago I was shot down by a woman, a person I adore. She’s young too. Her hair’s blonde and I find she has a composed manner, including when I’m shot down.

At some point in these proceedings I had the dream described below. The morning that I did, I woke up and felt discomposed. I’d been inspecting matters that ought to be somewhere else, not in view. Down an oblique hallway in a house you don’t visit, there’s a wall mounted with the blown-up print from your life’s back-of-the-bottle instructions. To this place I’d gone.

The preceding sounds like a dream in itself, but no. All that was the feeling I had the next day. The dream as presented was elusive only because it shot by in fragments. The fragments themselves stared at you; they seemed like footage screened behind the eyelids. A stretch of gray asphalt through green trees, the boondocks. Seen from overhead. One car is there, placed in a bright, empty midday and presumably headed somewhere.

I’m not at the wheel. I look on the face of my college roommate’s ex-girlfriend. She’s 40 now. She’s a single mother with a handicapped child, like in the movies. The child sits in a bassinet and is shriveled. Limbs and torso are too small. The head might be the right size, but a shock of jagged black hair tops it. The child trapped in the bassinet talks with force and ability and rarely stops.

I suppose the child’s mother is driving us. Gwen, as I’ll call her, was never close to me. But here we’ve landed and somehow she counts in my life. Behind her I see the car window and a ray of sun. I’ve come here for some mid-life reason that has forced my hand. In a movie I’d be an aging son summoned to look after his stroke-ridden dad; more likely a daughter, since that’s how the movies play these things. Possibly I’m being driven from the bus station.

Seeing Gwen, I look on middle age. The former girl has entered upon decades. Is she pretty like I remember? As far as a man can tell, she wears no make-up. The dream Gwen has her blonde hair as old, but her face is longer. Perhaps this is more because of the dream, not age. Her cheekbones are more to view, like those of the black-haired woman and the real-life blonde woman. Gwen from old had been tremulous and off-balance. But in the dream the set to her face is composed, cooler, like that of the real-life blonde. Of course, this might be age. We take life’s blows and learn, supposedly. The single mother has been through the fires. She’s sober and detached.

In recent months I’d been thinking about Gwen. I mean, I’d been doing so awake. This was now and then, and who knows at what moments. I have time to pass. I review my life and how it ought to have gone. I review so many missed paths that sometime this spring I came to Gwen, who was long-legged and pretty but timid and (to me at least) a blank. Looking at my stray memories of her, I concluded that she spent a lot of college alone. So had I, and perhaps the pretty girl and I could’ve thrown in together and built a life. That was the tenor of these retrospective thoughts. Not landing a babe, just the two of us putting aside childish things to firm up our lives. I might’ve talked up her confidence about studies. She might’ve taken me running, trained me about stride; her example might’ve got me to the track each morning, and she would’ve learned about being the teacher for once.

Not that I’ve ever thought about what would come after. In theory we’d be laying the foundations of decent adult lives, the sort of life I wish I’d made. But my ruminations don’t touch on those lives. A sober, mutually affirming pair like the speculative Gwen and myself would no doubt stay on course until death. But I can’t imagine Gwen being interesting, and what kind of life is that? So I leave it out. Then, in the dream, I find myself alongside her. We’re someplace where the sun makes you feel lonely, and a voice chatters from the backseat. I suppose middle age and death and the trapped ego are concerned.

I wake up and the slats and pieces of my life lie on the floor. I step over them and eventually I write this.