Lost In My Head

Don't tell me I must vote, pray, sing or dance. 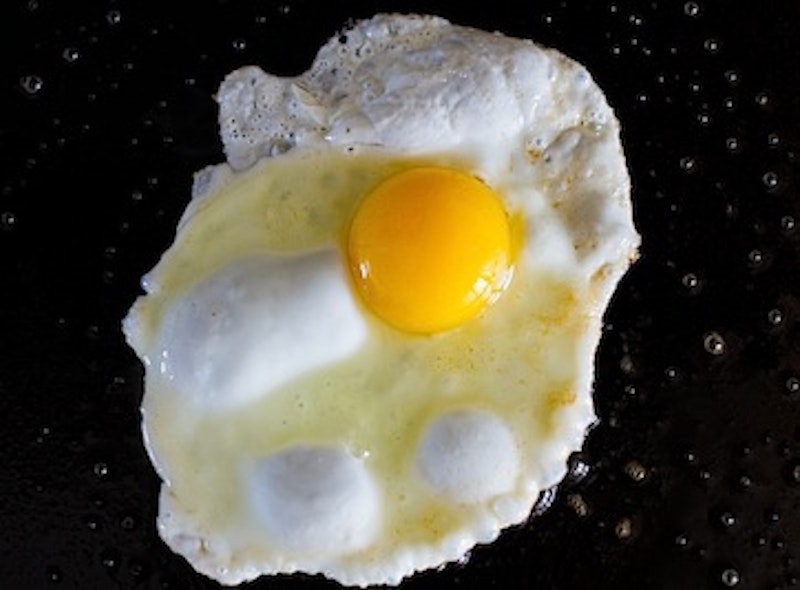 There’s an old TV ad of a crazy intense middle-aged white guy frying an egg in an iron skillet, saying that our brains are fragile eggs and warning us that drugs are hot frying pans. Any questions? The idea that you can fry your brains by using drugs is a far stretch and plain silly. I've probably fried millions more brain cells after a weekend bender swilling vodka than any drugs I've ever over-indulged in. Not forgetting sugar, salt, caffeine and anything deep-fried in hot greasy oil.

The only message I got from that fried egg public service announcement was "I'd enjoy some bacon and home fries with my druggy brain eggs please." And why didn't he scramble that egg first? Sunny side up!

Sponsored by "The Partnership For A Drug Free America." Oh yeah, that old tap dance two-step worked out just fine. This country is the most popular drug on the planet. Everybody wants some. A sweet slice of that All-American pie.

It comes down to how I'm feeling on any given day. I'm moving slow and my thoughts are sluggish or I'm amped up to 11 like a crackhead in lockdown and my head’s moving faster than my thoughts can fathom. Either way, my brain is usually mixed up misconceptions, ideas, proclamations, conspiracies, sadness, joy, humor, anger, fear and all the other emotional theories in the grab bag of contemplative gambits.

A thought repository of memory. Rusty reminisces deposited into the bank of mental savings in my vintage brain vault. Safe and secure inside my relic skull. On loan remnants of yearly memories compounding interest. A summary account of mindless credit. Tabulating the plus and minus column of forgetting. My vast knowledge of useless trivia. Well-versed in the art of literature and musical history. Like a writer who puts thoughts into sentences with no desire to review or critique the latest worthless book, movie, food or celebrity flavor of the month.

Living as a poet I can break all the rules of grammar. My license allows freedom of choice to let my mind wander around in my head. A rudderless boat adrift in waves of conflict. I might hurt your feelings. Your delicate and holy sensitivity as a serious artist. Not caring what anybody says, thinks or does is entirely another can of whoop ass. I attempt to share my thoughts. I’m not a beloved or celebrated man of letters. I’m infamous among my peers, a pariah in my hometown. I use letters to write these words and speak my mind. I love brains as much as any cultural zombie who eats brains like food for thought although I'm not a member of any intellectual elite zombie army. Choosing a singular path away from the maddening crowds of sheep.

I don't vote. I'm neither Republican nor Democrat. Not socialist, Marxist, communist, Nazi, fascist, or independent. I’m not proactive. I love anarchy and civil disobedience but I'm no anarchist, revolutionary or terrorist. I question authority on every level. I don't actively protest. I simply don't care about anything that passionately. I don't practice religion but at times will pray. Just don't rub my nose in your religion. A man nailed to a cross is too extreme for me. If voting is such an effective solution to our many problems then why hasn't it ever worked out in our lifetime? I've been told if I vote for so and so everything that's crooked will be made straight. There will be peace in the world, no more poverty, unemployment, violence, famine or homelessness.

Just go vote for somebody like it's the magic anecdote answer to every poisonous plight. It's your right to vote or not. Don't tell me I must vote, pray, sing or dance. It's like frying that egg in the hot brainpan of your imaginings. The specter of mutually assured destruction and the ruling evil empire shtick works for the moment. It’s always been a war for or against everything. Your vote counts? It's your privilege and you're entitled to it but please keep it to yourself. I'm not interesting in saving the world or any person, place, or thing. Saving grace isn't a good selling point for free thinkers. Socially redeeming qualities is cheap talk. Voting people in or out of high office won’t save you. It doesn't look good. You won't find it discounted at the dollar store of good intentions. My world is not yours even though we live in the same place.

I speak my piece sometimes before thinking. I’ve been told I don't listen. I'm always wandering in my ruminations. Stewing in my impressions. Not paying attention to what’s said to me. It's true. My mind meanders like a pickpocket in search of pinching thoughtless prey, thinking in my head and talking out of my ass. Like everything else now, it's addictive and bad for you.

Just some random meditations about a whole lot of nothing. Rambling babble about the state of consciousness in the ever-expanding universe of my brain. My rubber band has snapped. The hamster wheel is stuck in my brain cavity. Flying off my kazip. A surprise party I never knew about because I didn't go. There's a crack in realities mirror. A chasm of the bizarre, surreal, and mundane. Things seem to be happening over again. Repetition isn’t pretty. The past is tense in an empty box of the present. A whole lot of nothing wrapped up with an invisible bow of fatal flaws. The empty gift of giving brooding thoughts. Some might say I’m crazy, way out of my mind and still lost in my head.