Until the company bowed to pressure in 2016, McDonald’s had stumbled upon the most precise division of North and South. 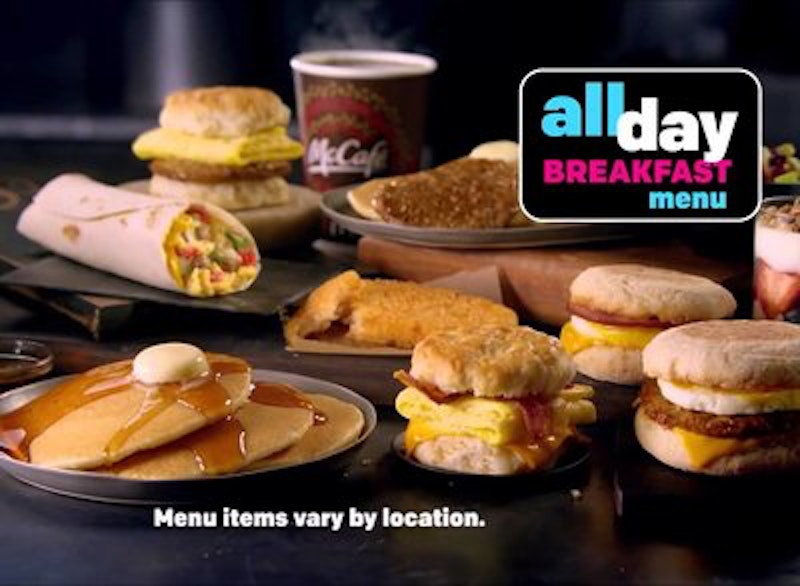 When I learned in 2015 that McDonald’s was planning to launch an all-day breakfast menu, my heart swelled—and not just because it was expecting to be overwhelmed by sodium, saturated fat and cholesterol.

But breakfast has always remained out of reach. I’d rise at the crack of noon, bleary-eyed after a long night spent playing Final Fantasy VI or VII, only to realize that I’d once again missed my chance at a few bites of salty, buttery bliss and the subsequent several of hours of mild indigestion.

“Nothing will ever be the same,” I said when I first heard about the all-day breakfast menu. “Today is the first day of the rest of my life.”

I drove to the closest McDonald’s and ordered an egg biscuit.

“We have McMuffins and hotcakes,” she said.

“You don’t have biscuits?” I asked.

“No, just McMuffins and hotcakes. We only have biscuits in the mornings.”

This couldn’t be right. I was living in North Texas—still a part of the South, right?—and I couldn’t order eight biscuits at five p.m. on a Tuesday?

After I’d regained my composure, I left and researched the matter. It seems that the all-day breakfast launch had been a bit of a disaster for the company: profit margins were driven down by the lower prices of the breakfast items, and franchisees struggled to simultaneously prepare two different sets of menu items using equipment that had been designed to make one or the other. More importantly, I learned that the company had limited the availability of all-day biscuits to locations in the “South.”

According to McDonald’s, the “biscuit belt” both comprised and defined the South. Florida and Texas, which had been part of the Confederate States of America, weren’t in this new version of the South, but my hometown, a coal mining community near the Pennsylvania-West Virginia border, was. Whatever Florida and Texas are, they aren’t part of the South anymore. And perhaps that’s true; in my experience, those states seem like big flat expanses filled with generic apartment complexes and McMansion subdivisions, holding pens for huddled masses of humanity relocated from somewhere else for goodness knows why.

And the part of me that was a historian... well, that part was still hungry for biscuits. But I started to get it. It began to make sense. I asked around.

“English muffins are amazing,” remarked a friend from Erie, Pennsylvania, a small city well north of the biscuit line. “It’s a finer texture, a cleaner texture.”

“I was often referred to as a Yankee while residing in Louisiana, with my choice of muffin over biscuit being one reason why,” added a law school classmate who had grown up in Northwestern Indiana. “The muffin gives you biscuit-level fill without the fat. The biscuit is just indulgent, the sort of food you might eat in a humid climate that makes people perpetually sluggish.”

Friends from the South, or at least Southwestern Pennsylvania, expressed their fondness for biscuits, which conjured up pleasant memories of home and hearth. Several current residents of Northern Virginia, a once-Southern region which is now comprised almost entirely of relocated millennials who wear ID tag lanyards and work for the government, opted for the muffin.

Had McDonald’s, in its zeal to maximize earnings (biscuits, ostensibly “made from scratch,” are slightly more expensive to prepare than McMuffins, which are easier to store and reheat), inadvertently produced a brand new map of the American South?

Yes, the modern-day Mason-Dixon line had been redrawn, and it no longer marked a colonial dispute-settling boundary among Pennsylvania, Virginia, Maryland, and Delaware. Instead, it was the creation of the corporate “suits” in Oak Brook, Illinois—a kind of breakfast-themed Berlin Wall, whose ugly existence meant that the McDonald’s biscuit would continue to elude my Texas-based grasp.

“You could try waking up before 11 a.m.,” one of my colleagues urged me. “Then you could get all the biscuits you want.”

Spoken like a true Yankee, I thought. We Southerners move at our own pace—a slower pace, certainly, but we use the extra time to take it all in. I shook my head. “No, no. That’s definitely not an option.”

Instead, I would wait. I assumed the South would rise again, much like the biscuits baked there. And eventually everything rose and converged; caving to intense pressure, all-day biscuits were offered nationally a year later, in 2016. As soon as those unhealthy beauties appeared on the menu at a McDonald’s near my temporary residence in Fort Worth, I ate a dozen of them all at once, then never again.