A Pizza with Everything

If you don’t read this story in 30 minutes, it’s free. 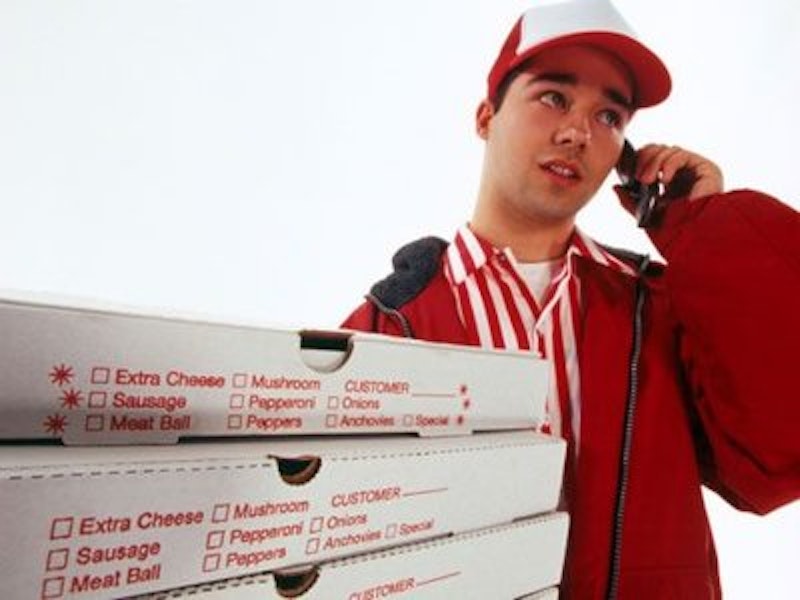 Wait a minute. Let’s do that again.

“What’s ‘everything,’ sir?” the confused fellow on the other end of the line asked. He’d told Brian his name was John, but who can remember? All these service workers are fungible and this was more than two seconds ago, after all. Great. “Sir?”

Powell shut his eyes. “It’s a pizza with everything, boyo,” he said, his calm giving way to obvious anger. “I want a fucking pizza and — “

“What? What do you got? You got shit, that’s what you got! You won’t even let me have chunks of corndog or a whole big fucking cucumber on my pizza and now you’re… Christ, I’m sorry, John, it’s just that I’ve been going through some pretty rough times, you know?”

“I, umm… sir, I need to — ” the confused fellow said nervously… awkwardly.

“My wife left me, you know? She stole my bass boat, too, that bitch. Not before I cleaned out her savings account, though. She was a mong, kid,” Powell said, kicking back and lighting up a cigarette.

“A Hmong, you troll. A refugee and an activist. Very important person, really. Ran a non-profit, you see. Oh, I don’t want any crust on that pie, by the way, and if it’s cut into any kind of slices or shapes I’ll search for your home address on Facebook and then burn your fucking house down, get it? Now where was I?” Powell puffed his fag and thought for a moment. “Ah, yes. I was raised in Yellowknife, kid. Know where that is?”

“Uh…” was all the poor fucker at the fucking dumbass pizza place could say. They never wanted to hear what you had to say. Sometimes you just wanted to talk to somebody about your problems, but all they were concerned with was whether or not you wanted “delivery” or “carry-out” and were interested in hearing about specials and so forth.

“It’s in Canada, dipshit. Between the border of Russia and Canada, that is. The borderline, I mean. Are you laughing at me, you fucking prick? I know damn well that I have a speech impediment!” Powell banged the phone on the wall several times, chipping the shitty plaster in his shitty apartment in the shitty part of town on the shitty side of the tracks, his loose sweatpants held up by means of a motorcycle’s drive chain wrapped around his waist. He isn’t even wearing pants that have belt loops, for fuck’s sake. “How dare you laugh at me!” he roared, banging the phone on the wall again. “I should get a discount on that pizza for this, you insensitive — “

“I don’t think we should see each other anymore,” someone said. I can’t recall if it was Powell or the kid (who was probably a middle-aged man, but everybody who works in any way with pizza must be referred to as a “kid”) at the pizza place or neither of the above. It may have been some girl or girls who said it to Powell when he made unwanted advances upon them or maybe they all hated him and that’s why they were always smashing his reflection with their little fists and feet. He hated the way they looked at him, you know. Hard to describe how that was and how it made him feel. Usually he threw up a few times, though. He was in pretty bad shape because he couldn’t remember when his love was new. Come to think of it, there is no new love.

Yes, exactly, love is the new love, said the idiot who had misread that line in a college literature course. He was nonetheless worshipped and idolized by millions and declared the voice of a generation by pundits and men with no necks alike. Later, when he was washed up and mostly broke, the idiot—now a disgraced idiot—claimed that his original message (cf. the first sentence of this paragraph) had been misconstrued and what he actually meant was that love is nothing, not that you should love people or whatever.

His attempt to convert himself from inspirational idiot to pessimistic idiot failed, though, as everyone continued to ignore him just as they’d been doing since they realized he had nothing but that one pathetic attempt at poignancy to offer anyone. Most people were shocked and outraged to learn that he hadn’t just disappeared from the face of the earth. What did he have to live for? they wondered. No one, not even top scientists like Niels Bohr, could come up with an answer.