There’s no one correct way to parent. 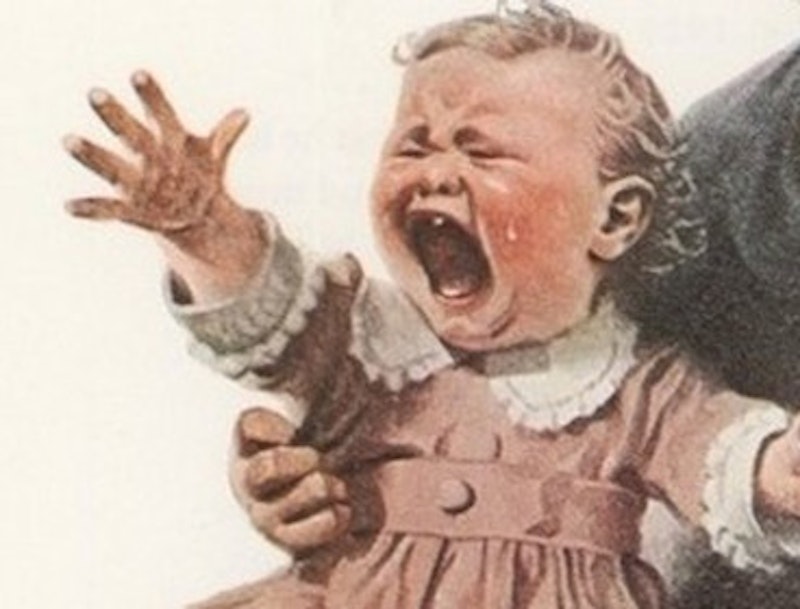 As I wade through another toddler tantrum, Sunday morning sunshine turns to stormy mental weather. I consider Donald Trump and his senior tantrums, his thumbs and spittle making our messy social media even messier. These tantrums are tantamount to wordless exhortations. Ego spasms so immediate the tantrumee becomes enthralled by his own digital words, thrown into the void of his us-against-them cloud of followers and his continually-provoked opposition. No delayed gratification or delay of any kind. Instantaneous responses cutting off our oxygen and lighting up our amygdalas. And because we allowed this travesty into the Oval Office, our media continues to report on each mini-tantrum.

What most hope to teach their children: how to deal with life's limitations, how to compromise, and learn to listen—these values are lost in the present dung-flinging moment.

We try to teach our toddler to slow down when the big feelings arise and overwhelm, but she's too young to absorb this. Sometimes counting helps. We count to 10 together and some of the potency of her frustration is gone. I remember my older brother's tantrums when I was little. In response to stern orders from my Mom, he’d slam his bedroom door, shaking our old house. My own tantrums tended to involve shouting and flinging objects. Agitation wasn't something I learned to breathe out when I was young. Mom would say, "Use your words," which was especially useful in elementary school teaching, but not against bullies as I got older. Getting people to lose it can become a game. My retaliation toward my brother's desire to control me or physically dominate was to often provoke him and then use my agility to elude my opponent as I did in youth basketball and football.

Our mom was a teacher and single parent. By then Ben was 12 or 13. The lack of a father in our house made respect and discipline much more difficult to instill in us. Mom had a few serious boyfriends but chose not to remarry. I can imagine how worn out she was at the end of her long days. She signed us up for every sport the town offered so we got some of our rambunctiousness out before dinner. Still, we had the afternoons before she got home and the weekends to play with and occasionally terrorize each other.

In one particularly memorable episode, I was yelling and screaming about not wanting to do something and Mom pinned me down, flattening my back, so I was on my stomach. She told me she’d get off when I calmed down. I relented for a minute and then girded myself and tried to flip her over, like I tried to my brother in our wrestling matches. Mom was strong. Her aerobic dancing regimen kept her muscles toned and her back sturdy. I lifted Mom a few inches and then fell back toward the carpet. I remember thinking, "I'm not sure if I can flip her, but if I do, it might hurt her."

Still, she was challenging me and I wanted to see how close I could come to throwing her off my back. I lifted again, pushing with my knees and elbows, and there were a few more inches of daylight. Then I relented and caught my breath. Eventually, we both slumped against the bathtub and I think I started laughing at the insanity of it all, which eventually allowed Mom to laugh, too. Believe it or not, Mom later recounted that this pin-down move had been suggested by her therapist, who thought that Mom needed to assert her dominance in order to maintain control of us as we were more defiant and rebellious.

There’s no one correct way to parent. Underneath, we all need safety and security. Now that I'm a father, it's easier to see how important those needs are. That desire to protect our children can be overwhelming and turn us into hovering helicopters. On the other hand, I've observed too many Saturday-at-the-park dads staring down at their phones while their toddlers roam into actual danger or do something that demands correction. Neither the helicopters nor the oblivious ones are allowing the child to develop in a healthy way. My guess is those dads are the children of parents who like to spout cliches like, "Well you turned out okay!" To which the obvious reply would be, "How would you know?"

There’s no correct way to parent, love, or protect. There is instead an ongoing conversation with your child, through the tantrums and the exhilarations, an endless conversation that builds a foundation of trust and the kind of dependability and genuine connection that will later lead to independence. This is another one of the issues with caring for your children: expecting them to go out into the world knowing they’ll have to protect themselves, sometimes from their own tantrums.