Dragging the streets around Penn Station. 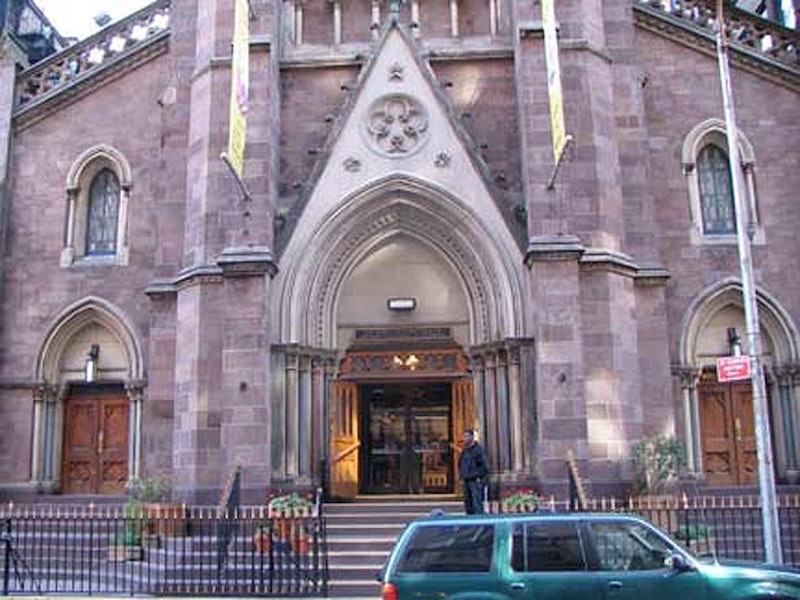 I’m very familiar with the blocks and side streets on the west side of Manhattan in the Penn Station area. I served two separate stints in this part of town, the first from 1988-1991, when I worked in a tiny type shop called ANY Phototype, which specialized in foreign language typesetting, though it had accounts like Circus magazine, which at the time was all heavy metal and pop metal; most of the other work was typeset in Russian, and I handled all the rest and checked the work character for character, since I was familiar with no language but English.

I returned to the area between 2000 and 2004, when I was a copywriter for Macy’s. I worked in the home goods, furniture and bedding departments. Macy’s has a sale going on pretty much every day of the year, but the sales are heavily restricted by one exception or the other, all of which has to go on the bottoms of the ads in what Macy’s called a floorline. For example, a 20 percent off coupon is good only in certain departments, and some brands (usually the most popular ones) are exempt from the sale. All of this information went in six-point type in the floorlines, which occasionally got so big that they took up a quarter of the ads. This all made my teeth hurt on occasion, and since I was working at 7th Ave. and W. 34th St., one of the busiest crossroads in the city, it all grated on my somewhat diffident and solitary nature. I felt the need to get away from it all.

While I was at Macy’s, I took lengthy lunches and photographed in Manhattan. I’d take the train down to Greenwich Village, rummage around there for over an hour, or would strike off east, now and then making it all the way to 1st or 2nd Aves. Sometimes, the subway would take me as far as downtown Brooklyn.

I’m a nostalgist. This is the neighborhood where this predilection began to crystallize While I was working at ANY Phototype, I became a student at the Center For the Media Arts, a trade school which used to be on W. 26th between 7th and 8th Aves., and it was there I used an Apple computer for the first time, most importantly learning QuarkXPress, which with its cousin Adobe InDesign was the main engine of my work life from 1992 to 2009, as I worked in newspaper and magazine composition and layout. Familiarity with computer typesetting led me to believe, in 1998, that I could combine my obsession with the infrastructure of NYC with page layout. The result is my website forgotten-ny.com, which this year is marking its 20th anniversary and has spawned two books, as well as this column.

When escaping from work and on the way to the train I’d often hear the bells of St. John The Baptist Church on W. 30th St. just west of 7th Ave. There are occasionally spectacular churches hidden on side streets in Manhattan. The Roman Catholic parish was organized in 1840 for a mainly German congregation, and the present French Gothic edifice was consecrated on June 23, 1872. In early 1997 the building suffered a fire that took out the original organ, choir gallery and several stained glass windows

The five bells that you can hear on the hour during the day swing as they ring and were cast by the St. Louis foundry, J.G. Stuckstede & Brothers. 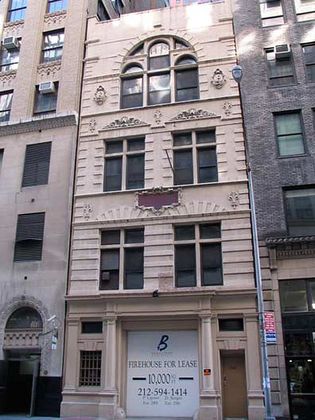 Continuing west, 240 W. 30th is the oldest building on the block other than St. Joseph’s. It was constructed in 1894 as Fire Patrol #1, later #3, in operation from 1895-2006. There are many secrets here: a two-story stable in the rear housed horses that pulled fire engines; check the ornamental pediments and windows, different on every floor. It was constructed by the NY Board of Fire Underwriters and is a survivor of a time before all of NYC’s firehouses were under the supervision of the FDNY. 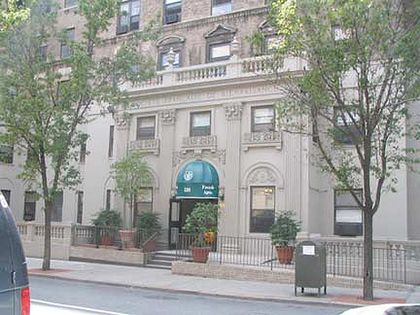 At 330 W. 30th is a large building with the phrase “Société Française de Bienfaisance (French Benelovent Society)” carved over the front entrance, and two doors marked “clinic entrance” with the vessel-with-the-pestle motif marking medical facilities. From 1929 to 1978 this was French Hospital, where Babe Ruth was treated for nasopharyngeal cancer in 1946-47; Ruth passed away the following year. Don Corleone was taken to French Hospital after he was shot in Mario Puzo’s The Godfather. These days, 330 W. 30th is the French Apartments.

So much of W. 30th on this block looks frozen in time, especially as you get toward 9th Ave. The exteriors of these buildings have likely not changed in decades. They still have their original corbel molds, and the building upper left still boasts window shutters and front door. Modern times, however, began to intrude. 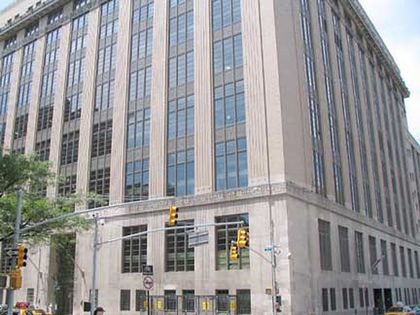 The giant Morgan Postal Facility, constructed in 1933, serving Manhattan’s main post office, the James Farley Building, at 8th Ave. between 31st and 33rd Sts., dominates the SW corner of W. 30th and 9th Ave. All postal operations have now shifted out of the Farley to here as preparations are underway to transform the Farley into the new Moynihan Train Yard, serving Amtrak, New Jersey Transit, and Long Island Rail Road. At 2.2 million square feet, the Morgan handles up to 12 million pieces of mail daily. 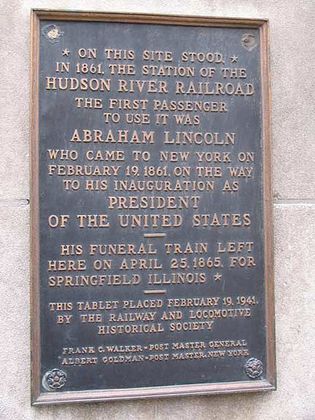 Long before the Morgan Processing and Distribution Center was built, this was the site of a depot for the Hudson River Railroad, a precursor of Metro-North. President-Elect Abraham Lincoln arrived in NYC for a visit in the run-up to the inauguration on March 4th, 1861, traveling from Springfield, IL by train beginning February 11th with stops in Indianapolis, Cincinnati, Columbus, Pittsburgh, Buffalo, Rochester, Syracuse, Albany, Poughkeepsie, Peekskill and then New York on February 19th. Lincoln’s next visit came after his assassination as his funeral train also left for Springfield from the depot.