And aiming it right at government. 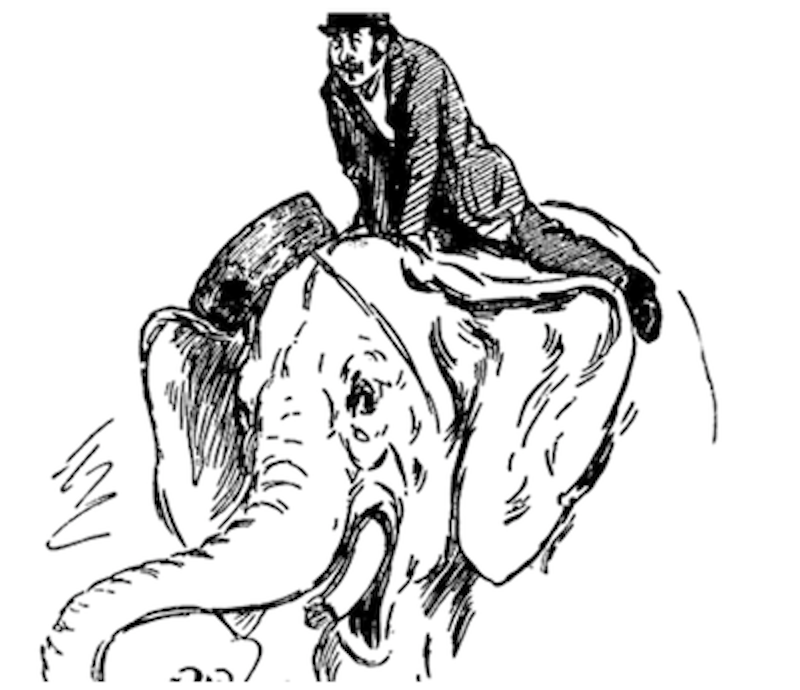 While others look to the Democratic debates and hope something will emerge that isn’t embarrassing, I have for a few decades now watched the turmoil and factionalism on the political right in the (very faint) hope something libertarian yet popular would emerge, liberalism having permanently disqualified itself over 100 years ago. Mostly, though, the right just offers new fissures and inventive ways to be wrong.

Now, the living brow-furrow that is conservative commentator Tucker Carlson, having by all accounts longed intensely since he was young to be on TV, has surveyed the political scene and, drawing upon his conservative distrust of big government and elite power, decided the thing most deserving of attack via one of his TV rants is—the libertarian Koch Brothers?

After decades of the Kochs dutifully promoting individual rights and free markets, Carlson apparently suddenly woke up and noticed they want to privatize major government programs such as Social Security and Medicare, which ostensibly shocks him. Part of his newfound hyper-populism, I gather, is defending government programs that are popular with the masses, as if that’s any indication the programs are fiscally sound or a good idea. Populism ostensibly means speaking truth to power but rarely means telling the masses they’re wrong. Telling off a group that big takes real courage, after all.

Carlson has struggled for years to figure out where his loyalties lie in that shifting somewhat-libertarian, somewhat-populist, somewhat-conservative coalition that counts the likes of Alex Jones and Ron Paul as members. Most embarrassingly, Carlson once agreed to emcee a Ron Paul event, then bailed part-way through the evening when he realized that Jesse Ventura was onstage offering conspiracy theories about 9/11. Carlson suddenly sensed a threat to his career via guilt by association and hightailed it out of there.

Given that sterling sense of commitment, I suppose it’s no surprise he’s beating a hasty retreat away from the out-of-vogue libertarianism that people such as the Kochs (and I) espouse, especially if nearly all his Fox viewers are on Social Security and Medicare. Pretend to speak truth to power, but always, always give the audience exactly what it wants—that seems to be the winning formula.

I may not be quite the embodiment of phony populist rage necessary to thrive in the current media environment, since despite what some of my detractors likely think, my soul is a bit more Bored to Death than Rambo: Last Blood—less “We’re winning this fight, rrraaaarrrhgghh!” and more like “Look, uh, this can’t possibly be right, can it?”

I always had a soft spot, though, for those who are so confident of their cause that they’re moved to ridiculous hyperbolic rhetoric (by contrast, I’m often joking, for the record, though I did an awful lot of that joking back before social media made it clear no one understands when anyone else is joking, so there’s probably no hope now of sorting out all my past statements by level of seriousness or irony; best to just keep moving forward).

I was saddened, then, to see that marvelously hyperbolic libertarian anti-war writer Justin Raimondo passed away, even though I probably called him nuts at some point, and I’m sure I complained that he’s one of the only two people in the world to unfollow me twice on Twitter (the other on-again off-again angry pundit to do so being the horrible and cantankerous left-wing loon Mike “Rortybomb” Konczal). In Raimondo’s honor, maybe I’ll stop griping about people who unfollow and unfriend me—they’re not all monsters, I suppose.

Raimondo was a great addition to the pantheon of libertarian eccentrics, a gay liberation activist turned Pat Buchanan-allied chronicler of the Old Right (pre-Cold War, anti-interventionist), the man who coined the term “Trump Derangement Syndrome” in an L.A. Times column of all places—able to get so hyped up over political conflicts (especially betrayals) that he once denounced elements in the Reform Party as “Satanic” for rejecting Buchanan as their presidential candidate. His fellow paleoconservative (or former paleoconservative) Michael Brendan Dougherty ended his obit of Raimondo for National Review by expressing the hope that the man’s tireless fight for peace against the military-industrial complex had earned him a peaceful rest in eternity—and added “to hell with war.”

Just the fact that it now seems natural to have someone condemn war in a National Review piece shows that some of the political turmoil of the past few decades—and some of the current wave of populism—has been worthwhile. That peacenik sentiment is a far cry from the days of the psychopathic David Frum calling people such as paleolibertarian Robert Novak “unpatriotic” in a cover story for National Review (one ardently defended by editor Rich Lowry at the time) merely for opposing the Iraq War.

Just as I could never truly hate someone as passionately committed to a noble cause as Raimondo—and just as I can’t hate Democratic candidate Tulsi Gabbard despite her lousy domestic econ policy ideas and near-certain cult-membership, since she’s at least boldly anti-war—I suppose I can’t quite yet fully hate the perpetually disingenuously-appalled Carlson, either, since rumor has it he personally talked Trump out of starting a war with Iran.

As Raimondo-style paleolibertarians like to say, we don’t just face an overweening government abroad or in the domestic policy realm. We face both. It’s a welfare-warfare state, a power-loving meddler across the board. I wish the right, or any large political faction, could maintain its animosity toward both parts of the monster at the same time. Unfortunately, there’s usually a quick path to popularity in wasting money and reducing freedom in one realm or the other, as the shifty populists of the world well know. One of these days, maybe everyone will be right across the board simultaneously.