Nothing’s obvious, and everyone has hidden motives. 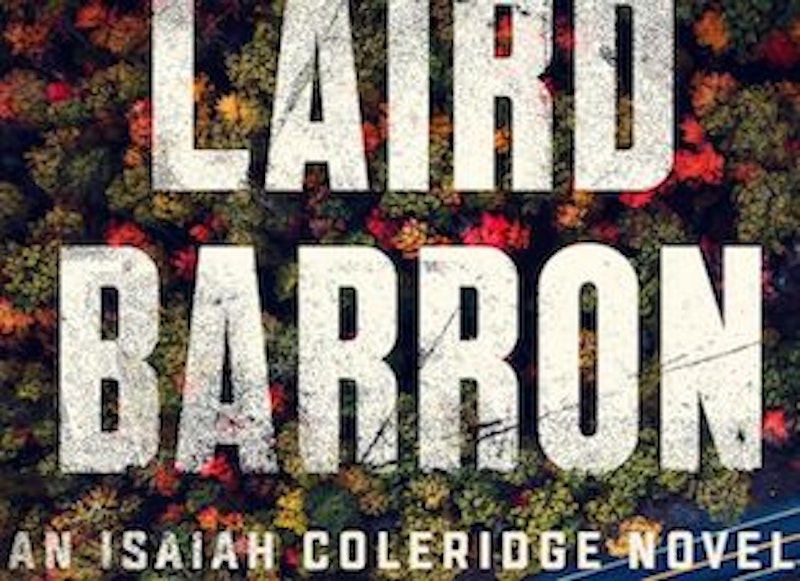 Laird Barron was mainly known as a horror writer, the winner of three Shirley Jackson Awards and a Stoker Award for his weird fiction. Then in 2018 his third novel, Blood Standard, appeared; a crime thriller, tonally it was in much the same vein as his earlier work. Black Mountain, the second book in the series, is out now and it moves even further in the direction of cosmic horror.

The novels mix pulp action and mythic archetype, power fantasy and bleak humor. They’re hypnotic, partly because of the cadences of Barron’s prose, and partly because they pull the reader into a heightened reality—not just larger-than-life in the way of adventure fiction, these are fictions with a dreadful sense of meaning that binds together massive quantities of violence and blood.

The protagonist of the two books is Isaiah Coleridge, estranged son of an elite American military officer, who as the first book opens is an elite hit-man for the mob in Alaska. He soon crosses a high-ranking gangster, and is exiled to a farm in New York State, the main setting for both books. (Hard not to notice that Barron grew up in Alaska and currently lives in New York.)

Isaiah’s an engaging first-person narrator, intelligent, perceptive, both proud and self-deprecating. He’s also both witty and brutal, capable of absorbing and dishing out heroic doses of punishment alternately physical or verbal. Half Maori, he’s interested in legends from around the world, and particularly conscious of himself as a Hercules figure. He’s alive to the world of myth, with a respect for altered states of consciousness—dreams, visions, the berserker state of blood rage that lets him perform astounding feats of strength.

Blood Standard sees Isaiah involved in the mysterious disappearance of the granddaughter of the couple who run the farm where he settles down. Exploits with various gangs, mercenaries, and intelligence operatives ensue. Black Mountain takes place about a year later, with Coleridge having taken up a career as a private eye and occasional heavy; a mob contact gives him a case that leads into a bewildering investigation of serial killings, corporate malfeasance, and dark secrets.

The plots are labyrinthine, which fits the bleakness of these books surprisingly well. Nothing’s obvious, everyone has hidden motives, and the more powerful a character is the more likely they are to be hiding something. Isaiah finds secret societies within secret societies as he moves through the surprisingly extensive underworld of upstate New York.

Barron gets much play out of the symbolic resonance of the idea of the underworld as well as the ethos of the criminal world. If myth-haunted, the books are still filled with gangster, dirty cops and all the genre furniture of a good noir action story. Literary references abound; these are books in which the password to get into a modern-day speakeasy (where contraband information’s for sale along with alcohol) is a line from Oscar Wilde. It’s not a coincidence that among the epigraphs that begin both of Coleridge’s adventures are lines from “The Rime of the Ancient Mariner.”

These books are filled with adventures involving fists and guns. There are gangs, mercs, dirty corporations, government conspiracies, and tough guys all over the place. A lot of pulp machismo: tough talking, faithful companions, military jargon, men who communicate with each other through violence and hardass women who (sometimes) love them and call them on their shit. And there are also dreams, visions, uncanny experiences in the wilds of Alaska or New England. Urban legends of unkillable mafiosos and secret government projects. Through much of the first book, Isaiah’s haunted by apparitions of death’s heads.

These sound like two very different sets of images, but Barron makes them work as a unified whole. It’s tempting to say they’re fused in the heat of the books’ pulp energy, but something else is going on. Barron’s prose reads as breezy and funny, so you don’t notice how precise and economical it is. There are points when the register shifts, growing deeper and more mysterious, and you only realize a few paragraphs on: dialogue becomes a description of something uncanny, or Isaiah’s reflections suddenly veer into a vivid dream.

Because the style’s so carefully machined, because Isaiah’s voice is so lively and his character is so complex, Barron’s able to take stuff that should belong to an over-the-top action movie and use elements of weird horror to make the stories feel like something far different from pure pulp. There’s hard-boiled power fantasy, but also darker elements, and a sense of cosmic scope that undermines the easy resolutions of adventure fiction. Endings are satisfactory, but not entirely happy.

Occasionally the books are too epigrammatic; a dream early in Black Mountain has a character tell Isaiah, “Love and loyalty are the two most powerful forces in the universe. They won’t save you in the end. Nobody is saved.” It reads well, but is too obvious. Mostly the books are very good about not having characters articulate things that they wouldn’t know how to say; if Isaiah’s more verbal than most of the men he deals with, moments like the foregoing quote still feel out of place. “Animals tend to represent our purest selves,” he observes later, and while he’s right, it’s still too simple.

And occasionally the symbolism’s too blatant. Isaiah opens the first book by angering mobster Vitale Night; he’s saved from the consequences by his patron (a fairy godfather) named Mr. Apollo. The contrast’s too obvious, especially as the book goes on to make very frequent play with Greek myth. It’s not clunky, but it is sometimes too studied—even if the Greek overtones effectively inflect the books with a sense of primal tragedy.

Still, these books are both entertaining and involving. Barron’s got something to say about darkness and death; the second book builds off of the first to deepen Isaiah’s character, without relying on previous plots. You can see the wear and tear building up on Isaiah, feel him getting closer to death, just as Black Mountain comes closer to overt supernatural horror than Blood Standard. It doesn’t go all the way, but a third book’s scheduled for next year, and who knows what that might bring. These two books promise not just an involving series, but a gripping overarching story that gets deeper with each installment.