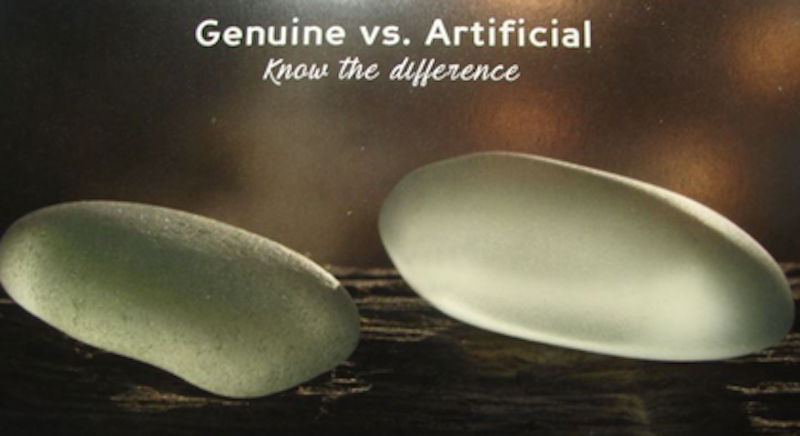 In my cottage on a little island is a sign that says #proudpurist. It was handmade and given to me by a sea glass hunter as a nod to my relatively uncompromising standards when it comes to genuine sea glass and in particular the protectiveness I feel about the phrase: “genuine sea glass.” I’m speaking for myself—but I believe some founders of the North American Sea Glass Association (I’m Education Chair and a board member of NASGA) —might agree, genuine sea glass is simply glass that comes out of the sea that was once discarded as trash, in shipwrecks, or other natural means such as erosion. We sometimes call this “beach glass” when it comes from other bodies of water, but since that water (like bays) are often connected to the sea, the difference in terminology isn’t required.

I’ve attended two sea glass festivals in the past two months in which fake sea glass was sold, and in observing always-increasing amount of phony sea glass that’s purchased and displayed online and at sea glass festivals, it’s hard not to become discouraged about the state of the industry. I know there are people who still value and care about whether the sea glass they’re purchasing (or even complimenting/liking etc online) is genuine because I receive a lot of private messages and have many conversations with jewelers who use genuine glass. People mail samples and send photos, but unfortunately nothing will change the fact that a large portion of sea glass sold online is fake. Seeing it sold at shows is even more heart-wrenching. And it’s difficult and a little scary for me to write about it because of the legal threats I receive. Let me be clear: I’m naming no one and simply discussing the issue in broad terms.

There will be no fake sea glass at the North American Sea Glass Festival in Wildwood NJ in September because we’re diligent about our members selling only genuine glass: “The primary goal of NASGA is to establish a community of informed collectors and sellers of sea glass that are educated on the characteristics and significance of genuine sea glass.” Tough decisions are made to remove members who don’t follow the guidelines. Guidelines state NASGA Commercial Members agree they’ll “leave sea glass in its natural state and not create imitation sea glass; meaning that the sea glass will not be altered by grinding, acid etching, sand blasting, tumbling, or by any other means so as to artificially replicate genuine sea glass.” Importantly, this includes our guideline that it’s not permitted to “imitate genuine sea glass” which leaves out a number of businesses popping up that spray paint bright colors onto the reverse side of white glass and still slap the “GENUINE SEA GLASS” label on it. It's not a use of terminology that many “sea glass purists” agree with since it can be confusing to consumers who think they’re buying sea glass that washed up on the beach that way, and undermines an industry for jewelers who sell genuine sea glass in genuine historic colors.

Sea glass is a vanishing resource worldwide. Coastal erosion/loss of shoreline and over-picking are the leading causes of the diminished supply. A time will come when sea glass jewelry, like vintage jewelry, will increase in value because it will be collectible, especially in rare genuine colors. Distinguishing between natural and artificial colors becomes like telling the difference between diamonds and cubic zirconia; many sea glass shows don’t allow colorized glass because it would affect other jewelers if it was being sold next to theirs.

Seeding sea glass into the ocean is another controversy that drones on in the community and I’ve already written a separate article on the topic, but it becomes more frustrating with every passing year to see all the Easter egg hunt glass displayed by collectors at shows and online. The more glass that’s thrown into the ocean to be found later, the more that turns up (and is sold) online, and in addition to being illegal (littering the ocean with broken glass) it creates an inaccuracy historically in terms of what is being artificially washed up at which locations. Not everyone agrees on this topic. As a “proud purist” I stand by the opinion on behalf of sea life alone that glass shouldn’t be purposefully thrown into oceans.

Consumers need to know the shows they’re attending if they care about genuine vs. artificial glass. It’s a big “if.” If they don’t care, and they only want to wear shiny pretty colors, folks can buy away. But if buyers want genuine sea glass, they can’t always trust what they’re being told. At one recent show, vendors were supposed to inform show attendees if they were selling tumbled or other manufactured glass, but this didn’t happen, and people were purchasing artificial glass. It’s one thing for a show to allow tumbled glass; it’s another for consumers to be lied to when they spend their money. Same online. If I were able to calculate the amount of fake glass sold online (especially on eBay) I’m willing to bet it’s 60-75 percent. And this year I’ll ask any festivals who invite collector exhibits to only allow displays of collections that’ve been hand-beachcombed by exhibitors, because displaying glass purchased online turns into a display showing a certain percentage of fake glass and is misleading to the public.

There’s nothing wrong with buying sea glass. I heard rumblings about people saying you shouldn’t buy any glass from anyone and that’s not true. Many people (myself included) have bought sea glass from other places they may not be able to visit themselves, from good people who have hand-beachcombed their own treasures and are willing to share them. But sadly, sea glass is big business and there are huge businesses making a lot of money selling manufactured glass. They set up fake accounts in the countries where the glass is allegedly coming from in order to do it. So like anything else, buyer beware.

If you have a collection of glass that you don’t know is real or fake, ask yourself if it matters. Manufactured glass that didn’t come straight out of the ocean is essentially art glass (not to glamorize it, especially knowing what the exorbitant, misrepresented prices are). Put it in a separate jar or on a windowsill and enjoy the colors. But maybe don’t put it in the jar with those treasures you found yourself on a long beach walk—because beachcombing isn’t about stuff and money, it’s about the peace we find when we’re out with the waves and birds and sand—certainly not broken glass or shiny jewelry or who has purchased the best “rare collection”.

At least for me, it’s only ever about when low tide is and whether it’s a day I’ll be lucky enough to hunt a shoreline. The saddest part of this industry is when it becomes only about the money instead of the joy of the hunt. I can’t stand stress and the bickering I see in social media groups, but I’m faithful to the education mission of the organization I represent and hate to see people getting ripped off.