The Phenomenon of Fire Haircuts

The promise is that fire is supposed to be a way of sealing split ends. 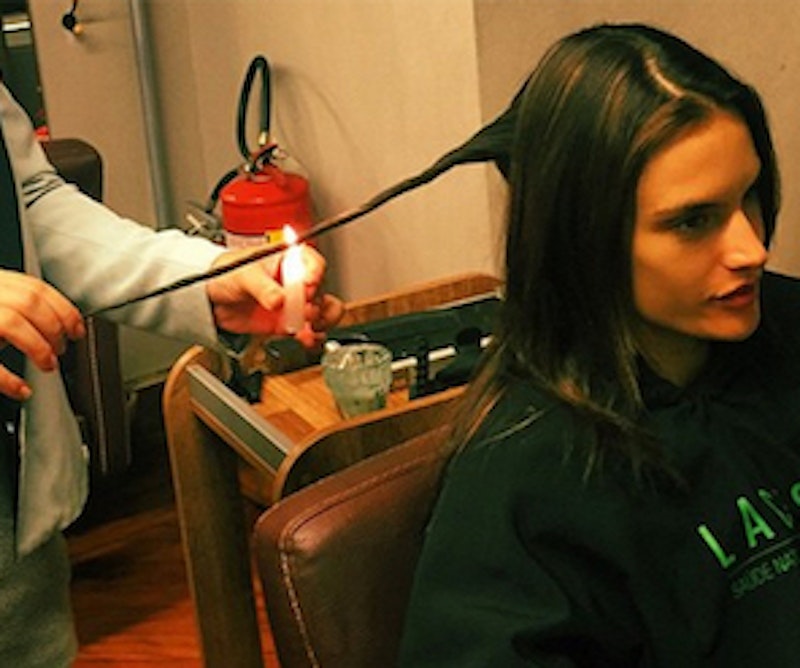 "Don't set your head on fire" sounds like one of those life rules that makes so much sense that I've never seen it questioned. Enter YouTube hairdresser Brad Mondo, who made a video exploring the phenomenon of fire haircuts. I've enjoyed his videos in the past, where the "hairdresser reacts" home perm fails and bad dye jobs will sometimes break out the science of where these experiments went wrong, and do so in a way that's funny to the audience and sympathetic to his subjects. This one’s a follow-up to a previous video where he reacted to footage of other fire haircuts. The new piece has him trying the technique for himself on a mannequin head, and assessing the results.

Fire haircuts are exactly what they sound like: instead of scissors, a hairdresser will use fire to "cut" hair. The trend gained global attention in 2015, when Victoria's Secret model Alessandra Ambrosio shared an Instagram photo of her receiving the treatment at a salon in São Paulo, Brazil. The promise is that fire is supposed to be a way of sealing split ends. The inevitable questions are whether this technique is safe, and if it's as effective as its practitioners claim.

It turns out that there are a few different techniques to fire haircuts. In the Ambrosio picture, her stylist is holding a candle to a section of hair, called the "velaterapia." In this method, the hair is washed and given a deep bonding conditioning treatment, and while the hair’s still wet, it’s sectioned off, twisted so that the split ends pop out, and the candle's flame is supposed to catch those ends and bond them. Another is called "pyrophoresis," where the hairdresser takes a pair of forceps, wraps a piece of cotton around the ends, sets it on fire, and proceeds to run the fire over the hair.

In Mondo's video, he watches footage of a hairdresser couple giving fire haircuts to two women. Improvising with the tools at his disposal, he and his mannequin head embark on their flammable adventure. He parts the hair down the center, gives one side a traditional haircut with scissors, and uses fire on the other. The hairdressing couple applies a method similar to the velaterapia, but with blowtorches instead of a candles, and Mondo follows along with a kitchen torch on the mannequin. Mondo remains doubtful, noting, "Ok, so now they're deep conditioning their hair. So even if the fire haircuts did make a difference, you wouldn't be able to know if it was the deep conditioner or the fire haircuts. And I think that's the point, because I'm guessing the fire haircut doesn't work, and you need to mask it up."

After struggling with the torch, he switches to a fireplace lighter. Mondo remains skeptical, even if he's enjoying the process: "So it's doing a good job of getting rid of the dead ends, without burning all her hair off. But it's leaving this gross, black residue behind... I'm noticing a lot of little black dots everywhere, where it seals the hair and burns it off. So, maybe that will go away once we blow-dry it... This is really fun, I'll give them that. I don't even know if there's any rhyme or reason to how they're sectioning off the hair, or how much hair they're doing per section, but it looked to me like they were just going in and lighting the hair on fire."

When the hairdressers in the footage Mondo is watching move on to pyrophoresis, his response is, "Stop! No, seriously, stop! I'm not doing that!" He tries the technique with the lighter, and notices that the hair looks a bit smoother, and the flyaways are under control. But when the women are revealed with their final hairdos, he's less than impressed, noting that the shine is more likely from the deep conditioning treatment, and the cuts weren't as short as the women had initially asked for. In the close-up of their hair, Mondo is appalled at the final result: "Yo, am I the only one who can see those fiery split ends? It looks like her hair was burned."

Mondo moves on to an Inside Edition video, where he fact checks the report. Balking at the claim that cutting hair with blunt scissors causes breakage and more split ends, and that fire seals the hair, bonding the ends together, he exclaims, "If this was actual science, everybody would be doing it. If we could bond keratin back together with fire, everybody would be doing it."

The hairdresser in the Inside Edition clip uses a Bic lighter to light the ends of the model's hair on fire, then comb it out. The result is a choppy, uneven mess that defies the claim on its own, because scissors will be needed to even out her haircut. Mondo is game to try it on the mannequin, but first observes how bad the burned hair looks: "I do see, like, just a lot of shorter hair coming off of her long hair. I mean, it really looks a lot worse. Like, concerningly, there's so many little hairs... Clearly, it looks disgusting. Oh, it feels so bad, it feels so crusty." After setting off the smoke detector, he calls it a day: "I don't want to burn everything to ground for the sake of a YouTube video."

Mondo gives the mannequin a final blow-dry of all the hair with a flat brush with no product past the conditioning treatment. In the final assessment of both sides of the mannequin, he observes, "Based on feel, I don't feel anything different, at all... Looking at the surface, I really don't see any different. It wasn't bad for the hair, but it didn't do anything special."

In my view, the couple in the first video were barely competent hairdressers who found a cool gimmick. Perhaps that's harsh, but the final haircuts were not what the women asked for, and evenly sectioning the hair for a cut is a basic skill every stylist should know. Also, as Mondo noted, the deep conditioning treatment obscuring the results of the fire haircut is like an admission of guilt.

But if fire haircuts are so pointless, why would one of the top supermodels bother with one? Refinery 29 sent writer Cat Quinn to the São Paulo salon where Ambrosio got her fire haircut to find out. At Laces and Hair Salon, Cris Dios is a third-generation hairstylist specializing in velaterapia, cutting hair with a candle. Dios is frank in mentioning the danger, which is why she's the only stylist in her five salons to do it. The luxury salon specializes in all-natural treatments, and Quinn notes the lack of the chemical odor usually found in salons. Over the course of her day, Quinn receives a full spa indulgence, complete with scalp and hair treatments. The service described at Laces sounds far more pleasurable, not to mention competent, than the hairdressers Mondo followed. The fire haircut still seems like a gimmick, but in this instance, it looks like it's being used to stand out in a crowded marketplace.

The lack of a chemical odor in Laces salon led me to wonder more about the safety of fire haircuts. While the dangers of fire are obvious, from hairspray to nail polish, salons and spas are rife with flammable chemicals. A Google search of "fire haircut fails" yielded 135,000 results. While I’ve no idea of that tally includes shares and reprints, I hope people with an interest in trying something different with their hair will at least consider Mondo's conclusion, and not give in to the Tide Pods challenge of haircutting: "My recommendation would be to not do fire haircuts, because I see no benefit, but I do see a potential hazard or risk. I will not be doing any fire haircuts on anyone, especially real human beings."