I look forward to every sunrise at the seaside. 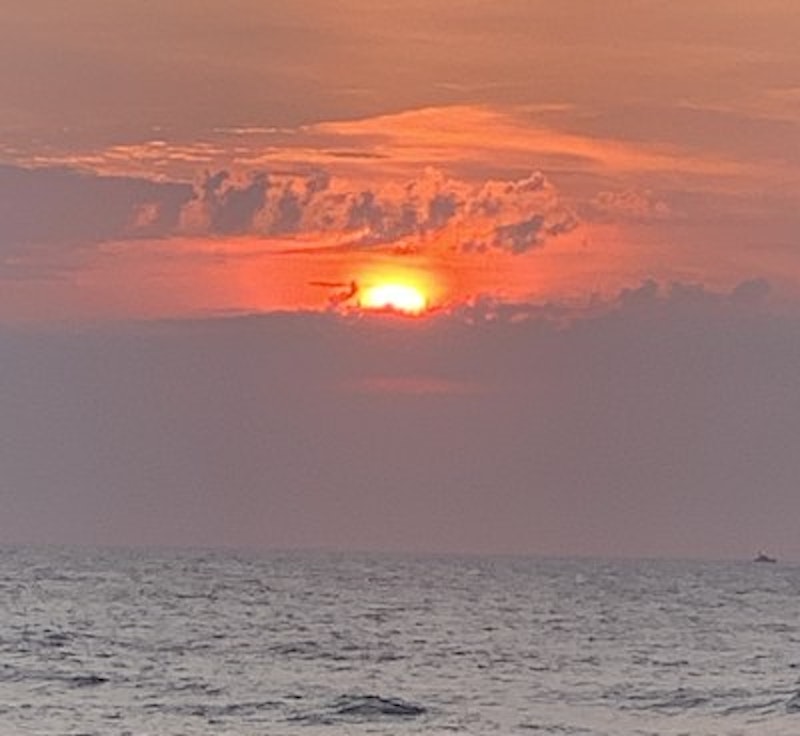 Right on cue, summer says farewell. This time of year always tugs at my heartstrings. The fall season makes a subtle entrance. The leaves turn colors and do that slow risqué burlesque to the trees bearing naked limbs. That crisp chill in the air returns. This past season we spent the summer travelling south to Chincoteague Island and also headed north through New England to Cape Cod and Maine. They have quirky state mottos, mostly translated from swanky Latin. In the early 1800s Maine adopted “Dirigo” which means, “I direct.” Massachusetts’ motto is a long-winded wordy mouthful: “By the sword we seek peace, but peace only under liberty.” My favorite is New Hampshire’s motto, “Live free or die.” New England is where it all began for our American way of life. Its towns and cities still keep the names derived from mother England. Many traditions from the British sovereignty have survived too. Except for maybe burning witches at the stake or the poor dental hygiene of its royal subjects.

None of that historical provenance of empires and revolutions matter much when I’m sitting on the beach as the sun warms my old bones. As the trivial melts away we hang out at the beach for hours, reading, laughing, sipping drinks, napping, people-watching and soaking in that salty air and sunshine. There’s nothing more satisfying than sitting with my feet in the warm sand, gazing out at the glistening ocean and the blue sky. A vast expanse of nothing but air and water. My wife loves the beach even more than me. Waking before dawn we head to the shoreline to witness the sunrise. It’s better than any movie I’ve ever seen. The magnificence of a new day, a morning ritual always different and more spectacular than measly manmade fireworks shows. I look forward to every sunrise at the seaside. It’s a life-affirming beacon of hope for a new and better day.

I could spend the rest of my days by the ocean. Rivers and lakes are nice but can’t compare to the majesty of the sea. That soothing sound of waves in tune with my blood crashing and pumping to the rhythmic tides of time. Sandpipers scurry along like cartoons along the water’s edge as gulls swoop low overhead. Pelicans dive bomb, disappear in waves returning with fish. Dolphins show themselves briefly as sand crabs peek from their holes in the nearby sand. It’s nature’s daily ballet happening unrehearsed. There’s a certain connection to our prehistoric ancestors. Some claim it’s where all life comes from. I don’t know for certain but it feels like home in my heart.

We try to avoid the tourist traps down at the ocean. This year we were disappointed to see a monstrous new water park open at the entrance to the Chincoteague nature refuge at Assateague Island. It signaled the beginning of the end for peace and quiet around there. Usually they rolled up the sidewalks  by early evening. Now it’s a noisy affair of kids screaming down the water slides and camper families airing their dirty laundry, yelling at their kids near the hotels. The miniature golf course and the pony rides can’t compete with that action. They have the usual gift shops, t–shirt shacks, ice cream shops and pizza joints. If all that pristine beachfront property isn’t underwater, caused by climate change in the next decade, it could become another Ocean City carnival destination.

It’s speculation but stranger things have happened. The ocean’s always an attraction for families to take that two-week vacation, spending too much money on trinkets, ice cream and French fries. With or without malt vinegar. For my money, or rather the lack of it, I prefer sitting in a beach chair on a deserted stretch of sand. Walking the boards along some seaside resort mobbed with tourists is not my idea of getting away from it all. There’re still plenty of places along the coast where civilization has yet to encroach upon the natural world.

I’d pick Coney Island over Atlantic City, but that’s a different mindset and a personal choice. Always partial to the sideshow by the seashore and Woody Guthrie’s home at Coney. Our time spent at the seaport attraction of Portland, Maine was nice but couldn’t compare to the quiet rocky beaches of Woods Hole and Quisset Harbor in Cape Cod. By then we had our fill of lobster rolls.

Coney Island evokes memories both real and imagined of forgotten times in a vintage Americana where anything was possible by the sea. A surreal dream world of amusements and fantasies come true. There’s always next summer. I want to keep this one close to my mind’s eye, seeing those beautiful ocean waves break and crash onto the shores and hear the birds call in the near distance. To watch the sunrise, hand and hand with my true love. Casually strolling the water’s edge together. Searching for shells and laughing together until the last sunset.