The deadliest police force in the country is gaslighting us. 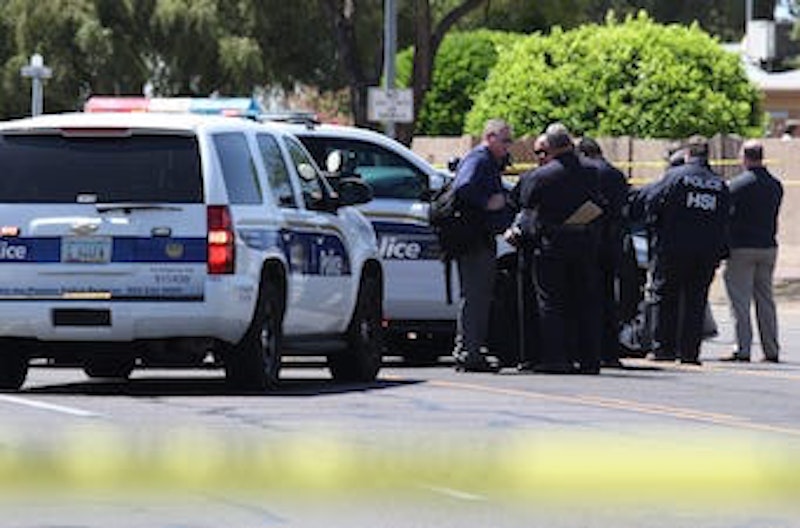 Over the past few months, a number of incidents have put the Phoenix Police Department on the defensive.

When bystander videos of excessive force surface, or allegations of misconduct and lack of transparency arise, elected officials resort to the tired response that officers are unfairly persecuted in the court of public opinion. They push back, at times vehemently, against even the notion of reform, lamenting, “This is not who we are.”

I disagree. Each incident, in their eyes, is an isolated one, rather than yet another piece of evidence for what should be a clear conclusion—the Phoenix PD is in desperate need of reform.

In December 2018, The New York Times published an article headlined, “How Phoenix Explains a Rise in Police Violence: It’s the Civilian’s Fault,” which demonstrated a discrepancy between police shootings in Phoenix and other major metropolitan areas.Last year, Phoenix PD fired at people 44 times, the highest in the country. It was more than Philadelphia, San Antonio, and San Diego combined, the next three cities closest in size.

The Times article also pointed out that the city has no explanation for the gap, other than to blame civilians for being too aggressive towards police, despite that there’s nothing to indicate Phoenix would necessitate the use of force to such a disproportionate extent. The city invested $150,000 in a six-month long study from the National Police Foundation to suss out the root cause and released the findings in April 2019—and their answer remained unchanged. They don’t know. More work needs to be done, there is data they want to look at further.

The city is dragging its feet. Community activists and groups like Poder in Action, a Phoenix-based nonprofit for social justice, have been advocating for reform long before the city invested in the fruitless study. Since the Times article, more events have added to calls for urgency.

A report from the Plain View Project, which reviews social media accounts of current and former police officers, identified nearly 200 posts from 75 current officers in the Phoenix PD that contain racist or hateful language, much of which is directed at minorities or protesters. “It’s a good day for a chokehold,” declared one of the posts from Phoenix officer Reuben Carver. Police Chief Jeri Williams later announced that officers responsible for some of the more egregious posts, such as Carver’s, had been removed from assignments and are being reviewed by the department, but did not say how many or in what capacity. Months later, there appears to be no real fallout for the officers or course of action taken.

Despite Williams declaring the posts as unacceptable, Sal DiCiccio, who sits on City Council and is a staunch supporter of the police department, argued the social media posts are free speech and can only be considered hateful if you’re a “liberal snowflake.” Less than a month later, a video went viral in late June where Phoenix PD responded to a call of a girl stealing a doll from a Family Dollar. Multiple videos from bystanders capture the encounter when police approach the vehicle in an apartment complex, drawing weapons and yelling at the family inside.The videos are disturbing. At one point, one of the officers points his gun and yells—“You’re going to fucking get shot!” while removing them and forcefully bringing the man to the ground. In one video, an officer appears to grab the infant from the mother and hand it to a bystander so that the mother can be handcuffed.

The girl accused of stealing the doll was four years old. She was inside the car with her father and mother, who was carrying the infant. The video has drawn outrage both locally and nationally. It was an egregiously unjustified reaction to a report of a stolen doll that drew nearly universal condemnation, even from Phoenix’s most conservative and law-enforcement friendly figures like Governor Doug Ducey.But again, the tired formula presented itself in the wake of the video—apologize, claim it does not represent the police department, and subsequently push back against need for meaningful change.

Until recently, Phoenix was one of the largest cities in the country without body cameras, making it difficult to corroborate claims of excessive force or inappropriate behavior. Now, the city will point to body cameras as a sign they’re taking measures to improve transparency, but this is a bare minimum effort to implement what is a baseline standard in modern policing. Video can be doctored or used to skew events to police advantage. Body cameras on the officers involved, for instance, didn’t capture the incident involving the stolen doll.This change alone will do little without the other demands community groups are calling for.

Phoenix PD has no way to track officers who receive excessive complaints for use of force or who’ve received disciplinary actions, or even to compile data related to performance evaluations or training. Essentially, they are blind to the nearly 3000 officers who may show signs of being a risk to themselves, the community, or who are unqualified to perform their job.

“Early intervention systems,” or EIS, software helps to compile this sort of data to give a view of an officer’s performance. Without this tool, it’s hard to believe officials who say the department does not have a deep-rooted problem in the face of ongoing controversies.In 2017, the department purchased EIS software that allows a limited version. In an Arizona Republic article from July, Executive Assistant Chief Michael Kurtenbach says that despite having the software, department records are stored in different systems that are not compatible with each other, effectively rendering the EIS software in place obsolete.

Due to renewed pressure from these recent events, the City Council voted to look into new systems and provide a cost assessment to be voted on at a later time—a promising move, but perhaps more symbolic than substantial considering their reluctance to implement these changes in the past.More importantly, Phoenix is also one of the largest cities that doesn’t have a civilian review board, which provides independent oversight. Civilian review boards can take many different forms in different cities, ranging from more of an advisory council to being granted subpoena and disciplinary authority.

The most vehement pushback against civilian review boards comes from police unions, which have a tight hold on the City Council, strong-arming them to squash attempts at reform and finding friends from politically-savvy and sympathetic figures like DiCiccio. While body cameras and EIS are a step towards transparency, they pale in comparison to the need for a civilian review board, which when implemented correctly, provides accountability from outside the department.

We’ve grown accustomed to a never-ending stream of injustice and outrage shared over social media. Tensions flare up, and then dissipate in quick succession. Community groups will continue to put pressure on the city with clear demands for a more efficient early intervention system, equipping officers with body cameras that automatically turn on when responding to calls, and most importantly, a civilian review board with meaningful authority.

As long as the city prioritizes a cozy relationship with police unions over the safety of its citizens, and until they implement these changes, the official position that “This is not who we are” will remain empty and meaningless.