When a Quibbits Claims He’s Suicidal

Please pray for my cousin Bennington. 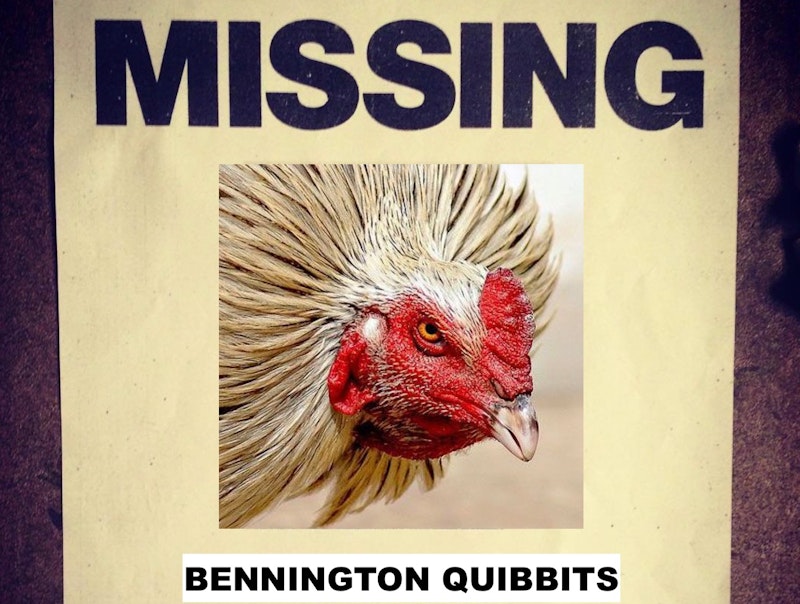 No one has called. No one. How? Why? I’m in crisis mode. My cousin Bennington is missing. He threatened suicide on Twitter the other day, and now my family’s in meltdown mode. Monica is… doing her best, she must be hurting because her behavior is inexplicable: all smiles, going shopping today, went out late last nigh to “dig some ditches with the fellas.” Who? What fellas? My wife has male friends? Uh, I mean… my wife has male friends. I’m fine with this. Anyway, she had prior commitments, which I respected, and so I was alone last night making “MISSING” flyers and filling out all the necessary paperwork. There’s a lot to be done when someone has been missing. We fudged the info a bit, he’s been missing less than 48 hours, but we know Bennington thinks quick and we just don’t want to bring him home in a doggy bag. I mean a casket.

Bennington’s a mildly irritable rooster of yay height, with pale gold feathers and a salmon red mane. He has a birthmark on his beak that sort of looks like “666,” but don’t worry, he’s not possessed. Bennington’s birthmark made him a frequent target of bullies and bigoted parents who ordered their chicks to avoid “the devil bird” among them. And we wonder why Bennington grew up so confused. How would you react if you grew up with an invisible radius of danger around you?

People looked at Bennington like he had the plague, and in a way he did: the plague of the honest tongue, the plague of beauty, the plague of pure life. A soul of unalloyed love was hardened and lost forever on the playground like so many others. Teachers were no less cruel: though he was spared the “dunce cap,” he was forced to wear something far more embarrassing: a sandwich board, one that read, “I AM A BAD CHICKEN” on the front and “PEOPLE EAT ME” on the back. It’s true that birds must be overly cautious in this world of shit run by humans, but no child deserves this burden.

A sandwich board. How is that supposed to make a bird feel? Well, like dinner. Or lunch. This is the purpose of the sandwich board, to make you feel the suffering and misery of our brothers and sisters in fast food captivity. Let me just ask this question: do Hebrew school students endure Holocaust cosplay? That’s all I will say on the matter. If I’m made to be understood correctly, the issue of Israel is very touchy in America. Why? They are so mean to the Palestinians… but I digress. I digress because I’m sad, and I’m sad because my cousin might’ve killed himself last night. If you see a sad rooster standing on a bridge or the edge of a high-rise, please bring him home. He’s lonely and he needs help. I think it’s finally time to put my cousin on Lithium… he can never know though. He hates Kurt Cobain (wasn’t vegan, stole his girlfriend), but he likes Pearl Jam, so I’ll tell him his pills are called “Evenflow” or something. I just want Bennington to come home alive and happy.

This has happened before, but we never believed it, we never had any reason for concern. You know what he told us the last time he said he was going to kill himself? “Don’t forget to get sauce on the side, they always mess up my order.” This was for a dinner that he allegedly wasn’t going to be alive for. He was back before the delivery guy even got to our house. But he’s been seriously depressed for weeks now and we don’t know why. Monica just isn’t as worried as she should be, but I believe my wife, just as I believe all women and distrust all men, so according to that metric, Bennington should be home safe and sound any time now. I’m not sure why my wife is singing “I’m So Excited!” right now, really not appropriate considering the circumstances, but I’ll let it pass. I’m a good husband; I try to be better. When they go low, we go high. It’s a winning strategy, and a good way to go through life: above it all.

Ah, to soar once more above the verdant fields and below the azure sky… but that’s a daydream for another day.