It’s Hard to Believe in the Coming Apocalypse

The mid-Atlantic region hasn’t been as green since before Europeans arrived. 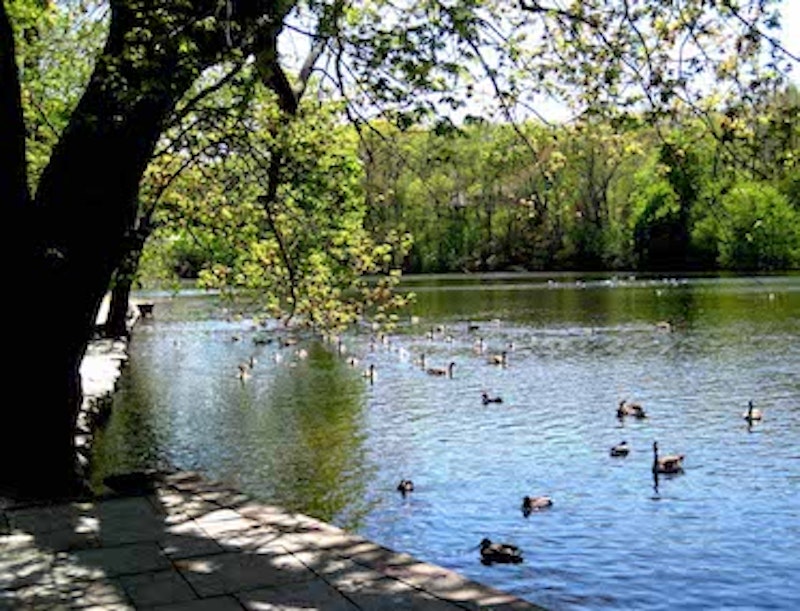 It's easier to believe in the end of life on earth in some places than others. It may be an unrepresentative geographic sample, but I’ve been hanging around in areas that don’t look very different than they did in 1900, and in which life is teeming. I write this from Himrod, NY, perched above Seneca Lake, and if the world has reached a climate crisis point, or if we had to change or die by 2012 or have to by 2030, that’s undetectable around here by ordinary human sense experience.

It might be easier to believe that climate change will end life on earth when you're reading social media newsfeeds than when you're walking, biking, kayaking or sailing through rural America. It looks extremely alive out here, and pretty darn stable, too.

Hard not to notice that it's green as all get-out. The ospreys occupy nests on big power poles and scream at you as you walk or bike by. Great blue herons move silently overhead, waving their big wings, and kingfishers chatter as they take minnows along the lake's edge, negotiating no doubt with the ducks and gulls for who gets what where. For the lake's edge is filled with minnows. Out kayaking on the eastern side of the lake, Jane's paddle got snapped at by a big fish. There's some disagreement about whether it was a pike, a carp, a sturgeon, or the Seneca Lake Monster. They're all still out here, under this rippling mirror of the sky.

The Amish are still farming here in much the way they did a century ago, still using the old one-room school houses, raising the same vegetable varieties and selling green beans from the farm stands, still moving hay around in giant stacks, and still driving buggies and bicycles. The dairy farms don't look or smell much different than they did 150 years ago, I think. That degree of consistency would seem unlikely even in a rural backwater in a world whose climate has been radically transformed or destroyed.

There are no signs of destruction visible to the naked eye, only continuity in the environment and the people. This is true also where I live when not on vacation, in south-central Pennsylvania. Various things look different than in 1970, say. Every so often, an abandoned or semi-abandoned house from centuries past gets knocked down unceremoniously and replaced by the sort of structure you can haul in on trucks. The hardware store has moved from "downtown" York Springs to a steel building on the outskirts. The demographics have shifted since '70, and the population now consists largely of older white people and younger Latinos.

But then again it's still orchard country, as it was in 1970 and also in 1870. There are red barns everywhere and rolling green hills. I live in an old red-brick schoolhouse that was cheaply rehabbed into a residence in the 1980s. The seasons still change, more or less when and how you're expecting them to. I'm not sure that the average temperature in south-central PA or in the Finger Lakes has changed very much. The ways of life are in transformation, as always everywhere, but the change seems relatively slow, or no faster than average.

Again, it's harder to believe in the coming apocalypse here in the rural mid-Atlantic than on Twitter. It sure doesn't appear that there’s any decline in insect populations anywhere I've been this summer, for example. And what I'd suggest as a treatment for your despair is, wherever you are, live long enough and attend closely enough to feel the continuity through all the changes: it's notable. Things are supposedly changing faster and faster, but time proceeds ever at exactly the same pace. Year by year, decade by decade, most things look relatively similar. That's what the Amish know and value in a way that’s often missing from Instagram.

Perhaps there are more extreme weather events, even here: somewhat more frequent and severe storms, for example, enough to disturb but not destroy the agriculture. Recent years have been unusually wet, which is the most readily detectible transformation of this environment. That may present problems for certain organisms, including the human, but it's made this bit of the world even more alive. The mid-Atlantic region hasn’t been as green as it is right now since before the Europeans arrived.

That the world’s ending is a common view among a lot of the people I know. As a dip into the Book of Revelations will suggest, people want or need to believe the world is ending; I feel this says more about their mood disorders than the order of the universe. They want to be living at the decisive moment in all of cosmic history, but they start getting bored waiting for its arrival.

People want to believe in The End; eschatology has always been a feature of religious belief systems. Having a role in The End, or witnessing it, lends people a special status in a universe whose meaning is obscure. But right now people seem exhausted by 20 years of climate emergency, and The End is itself beginning to seem like a long meaningless slog.

The first thing to do as a treatment is just get immersed for a moment in the life all around us in its change and in its continuity. You might as well, really. There's no sign, up here in Himrod, that it's going to be over anytime soon.