The Triumph of Time

An old comrade rescued me. 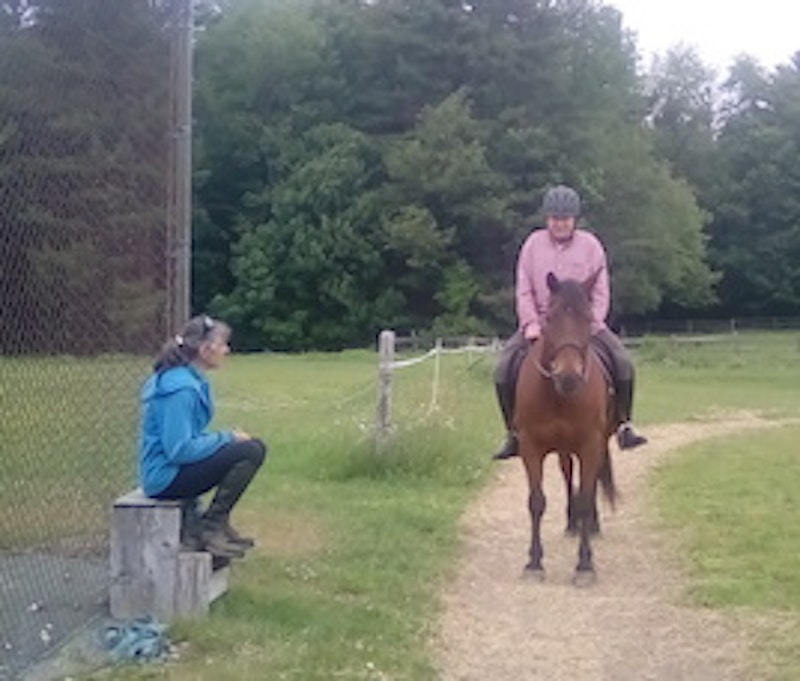 In October 2018, I had my last riding lesson with Toby, a thoroughbred more formally known as Noble Victory. It was prematurely concluded by my unexpected expulsion from his back. He’d popped two ribs—the medical term for that is subluxation—and when I mounted, I unwittingly inflicted excruciating pain. He defended himself and within seconds I’d hit the dirt.

Toby’s a good, cooperative, gentle animal. It was no one’s fault. I have no anger toward him. I was some time recovering. Having the ground come up to meet me exacerbated other health problems I’d neglected. Numerous visits to physicians, numerous prescriptions, numerous visits to counselors, a licensed massage therapist, and even a psychiatrist followed.

I remained in touch with my instructor Dorothy Crosby. During this time, I spoke at Avenue A, the teen and community center in Antrim, New Hampshire, where I live. I discussed learning to ride from the age of 62 and my relationship with Julio, the horse with whom I’d first worked. I answered an unexpected question from the audience thus: “Well, I’ve gone from kindergarten through 12th grade, four years of college, and four years of law school at night. I’ve had some good teachers. Dorothy Crosby is the finest teacher I’ve known in my life.”

Dorothy felt Toby might be too fragile for me and my skills insufficient to safely ride her two other thoroughbreds. This last was no slight. We share a realistic sense of my limitations. She recommended some other area stables to me. I chose not to go stable shopping until I knew I was able to mount once more.

An old comrade rescued me. In February 2019, Dorothy emailed me that Julio was returning to her barn. She’d lent him to a friend in Vermont who ran a stable providing horses for emotionally troubled children. He’d done well there, had fit in with the rest of the herd, and even developed a friendship with a mare. But Dorothy, who frequently visited him, learned from her friend that he seemed a little grumpy and out of sorts. She went back and, after some time with Julio, sensed the children’s difficulties had affected him. Horses respond to their riders’ feelings.

The children innocently placed burdens on Julio’s emotions he couldn’t quite sustain.

So Julio returned to Stoddard and his old stall. His horse mates and he delighted in seeing each other again. Much playing, running around, and rolling about in the paddock ensued.

She invited me to come over, say hello, and groom him. I’ve found Julio difficult, obstinate, occasionally impossible, utterly trustworthy, and ultimately endearing. I closed my eyes after reading her email. Even now, there are too many old friends I shall not see again in this life. I remembered something Margaret Reinkl had written in The New York Times, “Late midlife is invariably a time of loss. If you’re very lucky, the losses are utterly ordinary… But being ordinary doesn’t make loss less painful.”

So I looked forward to seeing Julio, from whom I'd learned a lot, not only about horses, but about myself.

In March 2019, I returned to the stable on Queen Street. Despite the high-sounding name, it’s a rutted dirt road running almost vertically up a hill to the barn. Stoddard is much higher above sea level than Antrim, where I live, and usually much cooler. There would be snow. I wore my lined boots with my riding crop tucked into my right boot, winter gloves, and a blue denim jacket to keep out the cold.

Julio wasn’t in his stall nor were the other horses in theirs. I took his halter and lead rope, opened and partially closed the barn door, and stepped into the paddock. The horses were about 300 feet away, feeding at several bales of hay. All four looked at me.

Before I could take a step, one began ambling toward me. A breeze moved the horse’s forelock. I saw Julio’s white star. He’d recognized me. I had to look away for a moment.

As with most things involving Julio and me, there was comedy, too. We'd walked within 15 feet of one another when I realized his entire focus—eyes, ears, muzzle, nose—was on my jacket’s lower right front pocket. That’s where I keep the carrots. I shook my head and bent over laughing. He walked up and nuzzled the pocket. I slipped the halter over his nose and gave him a carrot.

We were back in business. We headed for the stable door, side by side. He stopped, turned his head, and looked at the pocket. Following my wife’s advice, I walked six feet in front of him, turned, and held out another carrot. Out of his liquid brown eyes came the kind of dirty look that might curdle new milk. Needs must when the devil drives, though, and he walked forward to lip the carrot from my hand. We went on.

I secured and groomed him. For the first time, I noticed some white hairs on his neck and hindquarters. We now shared signs of the triumph of time.

Then I led him out, removed the halter, and released him to the paddock.