Aziz Ansari Gets You in a Corner

Badgering, invasive comedian is back with a Netflix special. 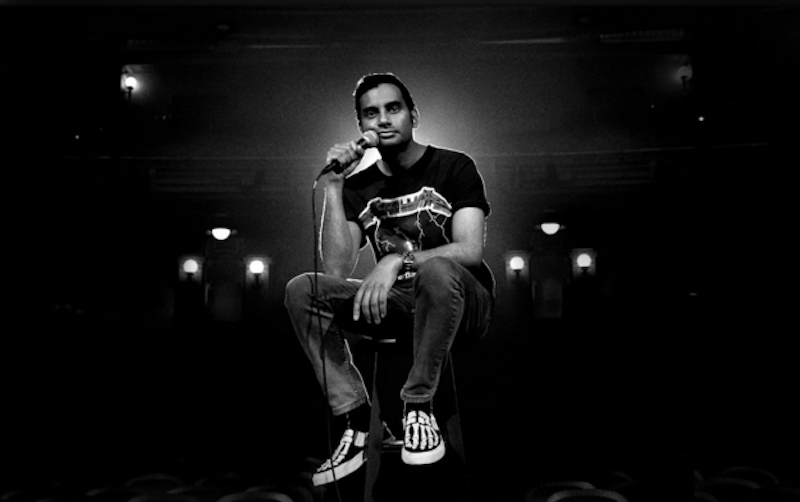 You can see how he’d give a girl a hard time. During his new Netflix special, Aziz Ansari corners four different members of the audience. “I’m not trying to embarrass you, dude,” he says to one. “Are you nervous right now?” he asks another. To the audience at large: “You’re not off the hook.” At one point he goes to work on a boy sitting in the front row. Among other things, Ansari has an embarrassing question about the boy’s mother and her sex life, and he wants the kid to ask her when he gets home. “Will you do it?” Ansari asks, or shouts. “Will you do it? Will you do it?” His palm is out for a high five and he keeps shouting until he gets one. I’ll note that the kid is 10 years old.

Right Now is Ansari’s public reintroduction after his dating scandal from last year. Here’s how the penitent played things: get the issue out of the way fast, then become the guy pointing the finger. Most of the time his finger was pointed at the public as a whole—“The Internet can confirm anything you want to believe, right?” But then he’d swing it at some schmo within physical range. A victim would be pinned by all those eyes, and Aziz and his microphone would go to work. Maybe people in the front rows signed releases. To the dude he wasn’t trying to embarrass: “People like you are the problem.” (Because they have to have opinions about Internet controversies.) To the lady whose nervousness he was curious about: “I’m just messing with you. It’s just fun to make fun white people feel bad.” During the final credits, one is grateful to see him shake hands and give meaningful eye contact to several of his victims, including the kid.

Ansari started his badgering early and kept the technique popping up through the hour. His dating mea culpas, by contrast, were confined to the show’s very first and very last minutes. As of three minutes and 30 seconds into the evening, he’d done his heavy-eyed bit on the stool about thinking over his mistakes; he just hoped he was a better person and other men had learned from his mistakes. A minute and a half later, he was telling everybody how people nowadays weren’t up to his standards—too soft. What if we had to have a draft? “With these people?!” A minute later and he was bellowing out reassurance, our authority figure: “But I promise! It’s going to be okay.” Twenty minutes in, he was giving us the moral lowdown: “Look, we’re all shitty people… In 50 years we’re all going to look back and feel like complete assholes.” All of us.

Oh well, the kid’s got brass. Not many people can sit on a stool and keep a few thousand people paying attention. Ansari’s one of that tribe and he carries off his evening. Right Now is frequently funny, enough so to qualify as a decent comedy show and not just a social history mini-event. His material about people-are-soft-now includes a business start-up to make CaShoes, cashew-based shoes. Over the course of eight minutes he sets and then detonates an exquisitely laid joke at the expense of a man sitting in the front. (Admittedly the man’s name is a gift to comedy writers.) When he isn’t funny, exactly, he’s still canny about what levers to work. Ansari uses race and white guilt—repeatedly and at length—to keep people sitting up while he persuades everyone to feel a bit sick of this whole business of moral opprobrium and crowd-think about the unacceptable.

His wind-up comes fast. The set-up is neat: Ansari has scored again off his front-row chum with the funny name, and the comedian says, “I’m glad you’re here tonight.” Then, sitting back on the stool, heavy-eyed: “I’m glad everyone is here tonight.” Now the talk. For the first time, he mentions that his career might have been done for. Instead, he continues, he can keep on performing because fans stuck by him. Before he wasn’t grateful, not really. Now: “That old Aziz is dead.” The new one appreciates the moment, just being alive. In a bravura bit of recall, he weaves in mention of some of his stooges from the past hour: “Right now, this is our moment, right? Me, you guys, Dan, the random lady who yelled ‘Funny!,’ young Tyler who’s scarred for life—it’s all of us, and this is our moment right now.” People who’d been singled out and embarrassed are now officially brought back in. Everybody belongs in, including Aziz Ansari—that’s the message, and the noisy, clever, implacable little squeak toy got it across.