Sometimes Women My Age Scare Me

Out of my depth with a stranger. 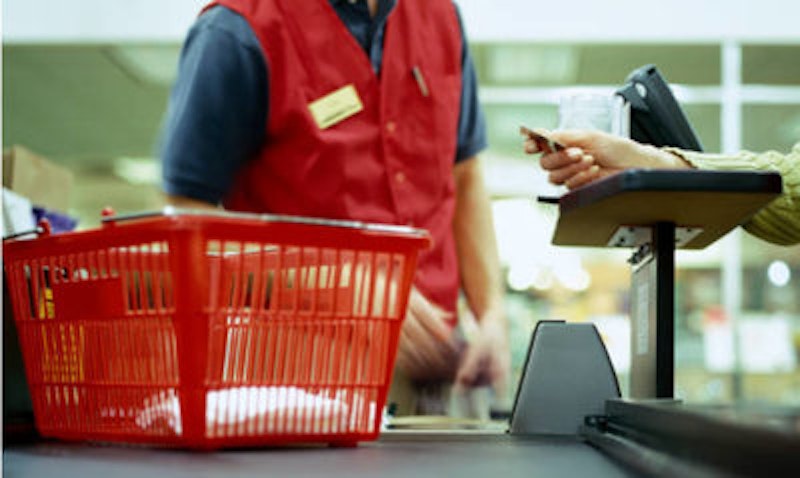 She came to my rib cage, I guess, and she was a merry creature: a bright-eyed, long-faced woman with dewlaps and gray-streaked hair. Her crow's-feet were elaborate, almost flamboyant: they flared and went deep.

I was letting her ahead of me on line. I had a basket of things to buy; she had one thing. It was a little plastic tub with a lid, and she held it in her hand, the price sticker in sight. “No, you go ahead,” I said to her. “I've got all this. You just have that there.” She paused, made a decision. “Well, all right,” she said.

The point of the story is that, as soon as she got to the cashier, the woman announced that she wanted to buy four more of these little gadgets. Check the stock, she said. There was just one cashier on duty, and he tried begging off, but she cheerfully plowed on. She told him a colleague could be summoned, and if the colleague couldn't be sent to check stock himself, the colleague could make the call to whoever did check the stock. She was upbeat about all this, a solver of problems, but her thoughts were not suggestions; she gave orders.

At one point she turned back to me and flashed a smile. “That's gratitude, eh?” she said. I smiled back. I did so like I had thoughts on mind, thoughts about how my knee hurt and how astonishing the human race's predictability can be. My smile was like week-old lettuce that wants its smell to drift near your face. A bent-ass excuse for a smile offered up with no hope or desire of passing. “Yeah, right,” said the smile. “Charmed.”

Not that it did me any good. “It was so nice talking with you,” the woman said just before she left. She turned back to say it, and her look was friendly enough, like the two of us ought to be on decent human terms of mutual respect. My wilted lettuce had made some impression, perhaps, but not enough. All right. I nodded back and she left my line of sight.

I bet the way she sees herself, she thinks she's the walking example of how it's done. She's demonstrating the no-bullshit, psychologically grounded manner of life. On line she told me she used to give psychology advice to viewers, back in New York, and that now she was getting her Ph.D. in psychology. Our chat was okay, I guess. I don't talk to that many people. I was impressed that she’d been on TV. “Oh, really?” she said, a bit disappointed. I asked what was her station. “It was commercial TV,” she said briefly. Smiling, but brief.

New York was kind of a dud topic too. When she talked about it, she combined being emphatic with being vague. She laid down certain key abstract nouns with a measuring look, to make sure my response was proper. But I'm not sure what the nouns were. They didn't include “income” or “inequality,” or “race” or “law enforcement.” I bet any of those would’ve helped. Mainly, she seemed worried that I might say the wrong thing. I didn't say much of anything at all, but she walked us past the danger.

I mean, really... I had let her ahead on line only because I thought she had just one thing. She knew that. I wanted to be fair and keep her from getting stuck behind me. She knew that. She accepted anyway and then staged her big operation. But when we were talking, she wanted to make sure I wasn't some kind of moral dud, that I didn't turn out to be the wrong kind of person.

Well, that's quite a one-two. Does it seem familiar? I don't date, but I hear about dating. I think my little experience may be the closest I ever come to late-in-life dating with somebody age appropriate.