"The price of anything is the amount of life you exchange for it." – Thoreau 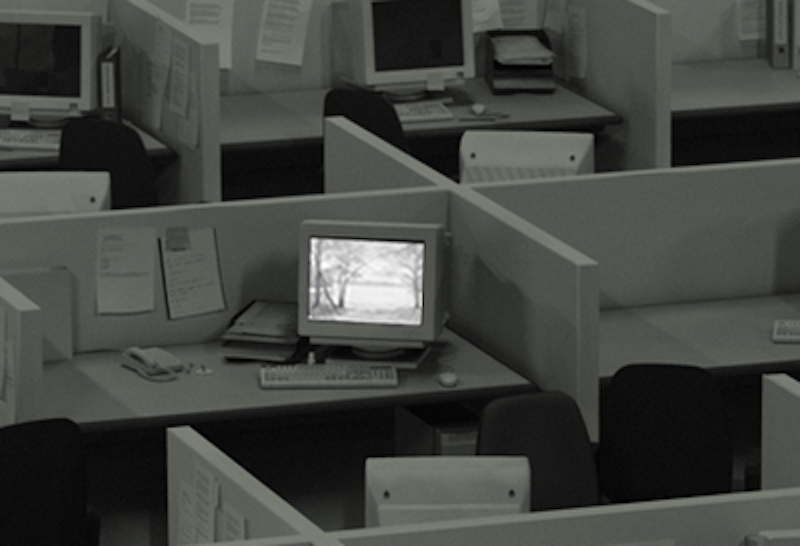 I wouldn’t recommend you read that quote at a job you’re resigned to, but not from, in your quest for comfort and security, which is probably directly proportional to prolonged despair. I wouldn’t recommend you get an administrative job in your late-20s and stay there for 10 years, sitting in a cheap office chair that makes your constipation that much more evident.

I read Walden in college, mostly in my dorm room during the evenings, and before classes during the day. The campus was situated deep in the woods, through which I despondently walked between classes, preoccupied by all the sex I wasn’t having. I’d occasionally stumble across deer, who’d look at me with a kind of trusting stupidity I mistook for kindness (or maybe it was the other way around). Nature’s association with Enlightenment aside, liberal colleges tend to advertise their distance from the pedestrian and crass world at large, both metaphorically or otherwise, as if the pastoral meadows and opulent lawns in which such campuses are tucked offered a buffer for the grim realities awaiting them.

Where the hungover or recently laid might rush into class two minutes after it started, and where the more diligent will arrive two minutes prior, I was always 30 minutes early. It was a difficult time; that is, not being able to fill it. Part of the allure of a First World problem is how convincing it is only in the mind of the inhabitant. My father paid for my education, and instead of working, or being grateful, or enjoying a freedom I’d never experience again, I practiced a peculiar type of narcissistic self-pity, seeing myself from a solemn distance, walking in the third person through melancholic moments whose cloying profundities alluded him.

I had long hair, wanted to be an artist, and looked at various women with whom I became obsessed, one of whom casually recommended the damned book to me in the first place when I’d said I was always stunned, and a little saddened, whenever I found myself alone — like discovering myself sitting there from a body outside of myself, from this other buried side of me. But there was nothing dignified or poignant in what this person saw, just a depressed guy sitting in an empty classroom (he would imagine a wordy chapter on fellatio nervously excised by Thoreau's publisher, finding another part of himself under the table) reading through waves of boredom.

I don't know why I arrived so early, probably to escape my dorm room, out of whose sole window I'd already looked for too long, mostly to chance upon one of many squirrels I imagined as being the same one, its happiness at finding a nut oblivious to anything else. I envied that kind of ecstatic preoccupation at a mere nut, which Thoreau, back in his day, would steal from squirrels, "for the burs which they had selected were sure to contain sound ones.”

"Occasionally I climbed and shook the trees." What a nut. He obsesses on nuts throughout the book, finding Koan-like lessons inside them. "Those which have the thickest shells are commonly empty," he will say after gnawing on a walnut shell for some time.

As for the girl who recommended Walden, whom I offered my virginity one tragic and rainy afternoon, she’s now a farmer in Vermont, which is fucking fantastic, if you’re her dog, or much larger and bearded husband.

If God is a satirist, we are his muse. That the etymology behind mortgage is “death pledge,” from the shiny happy French, owns up to its bleakness from the start; career, however, also from the French, comes from “a course” (usually at full speed, as in chariot), then eventually, “course of a working life.” There is volition, momentum, and expectation with such a word. This is the difference between a career and a job. As for "day job," that’s what disappointed artists use to say job.

Thoreau’s cabin was actually just a mile from town, where he went a few times a week for local gossip. His mother, with whom he lived his entire life—paying rent as a permanent tenant—frequently brought him cake and cookies. On the weekends, he returned home to have her do his laundry. I’m always stunned whenever I find out a great man lived with his mother at some point (Rene Magritte, Jack Kerouac, Miles Davis, Steve Jobs), since I can only handle mine for two nights at most. It's funny how being in the suburbs again is a type of wilderness. One hopes to find happiness deep in the woods—as one imagines inside his cubicle, an ascetic discomfort which only spiritual detachment can render glorious—and not in safe bourgeois doses. The problem with Thoreau is he may just be like everyone else. The quote with which we begin this essay now seems fraudulent. Thoreau only offers us a rhetorical vision of enlightenment tourism. It was only blogging. I know that sounds small of me to say. I guess my heart has shrunk a little inside this cubicle.

However cynical this may seem, I’m still hoping this makes its way to somebody in college majoring in Art or Literature. What this dead soul here calls "naive," an incipient or flourishing person may call a good idea. Maybe you’re sitting on the grass under a tree, between classes, and you notice a nut that others don’t, inspecting it without ever thinking to Instagram it; maybe if I told you to hold on to that tightly — that secret separation from the world, of infinite silences out of which memories are gently carved— for as long as you can, because life’s cruel irony that self-preservation entails spiritual death will prevail at the end, then you would likely say I was getting overly sentimental here, which I always subconsciously read as semi-mental, because the worse thing about feeling is, well, the feeling. So we say your author was just another idealistic young lad in college, whose sprawling and misguided loneliness launched him between the lines of Walden, into the cabin with mama’s cookies, lodged in the floorboards, a view of the stars through the sole window, safely nestled in between some great divide.

Some 20 years later, incidentally the time it takes to make a 20-year-old imagined reader, a man hides behind the third person, writing this since morning, as witnessed by his boss twice already—who’s acclimated to disappointingly surveying the former’s monitor whenever he can—and the joke is he, the writer, will never be fired, not even come close, for such petty vocational transgressions, however masochistically he may wish for it. It’s understood that employees will occasionally not work at work, for if not working will enable a worker to work better, when he gets around to it, then Capital is working. A reasonable boss will simply look away, into the imagination of a greater empathy, at a time when fools marched into the woods. There is nothing as cruel as a nice work environment. I hope you enjoy the book.