A Run-In with Bushwick’s Pizza Mugger

Don’t make me call my boys. 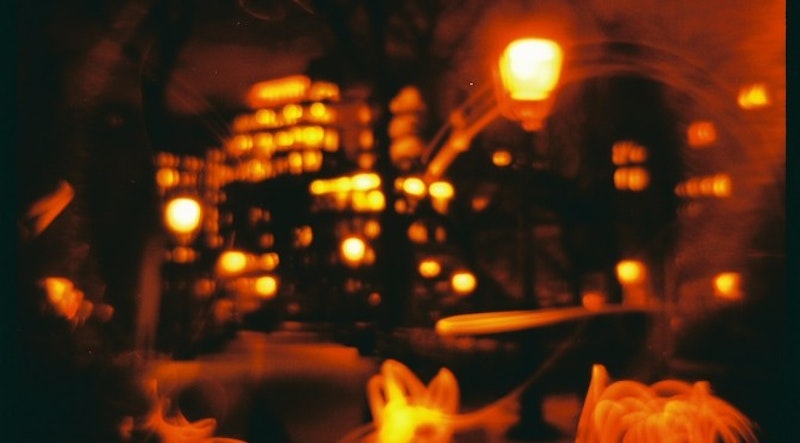 On a sticky summer night, Michelle sewed a lion-print shirt for Jared in their apartment. Her old sewing machine stuttered a racket, “Gin, gin, gin, gin.” Finishing the placket, she paused and stamped a foot on the floor.

In bed, Jared put aside his NOOK on which he had been reading Little Dorrit and waited for the frown he knew so well as “sad lip.”

“I could eat too. You want me to bring back pizza?” A cheerful scissor snip answered in the affirmative. “A Margherita slice! And a grapefruit soda, if they have it.” Jared dressed and spun in a tornado through a never-ending scramble to find his wallet, phone and keys. “Okay, I’m off.” He was alone on a mission, dashing down the stairs, dodging dog piss puddles and trash bags, escaping the eyes of a bantering mother and grandmother; he ducked a soccer ball kicked high by squeaky-shoed kids on his way out the door. If Jared was a spool of thread, he was already a good deal unraveled, the beginning somewhere back up the stairs.

Jared had found the place to live in Bushwick two months ago. Sights and sounds of Greene Ave. at night splashed his senses like a pool party. Homeowners behind gates swept their pavement or conversed at grills, flipping chicken that emitted a fatty smoke. Puerto Rican salsa beckoned from speakers in the People’s Garden. Across the street in the lot beside what he imagined to be a sobriety house a group of women sat in a semi-circle of plastic chairs, ruminating over plates of beans and corn on the cob. As he walked by, their glances bore friendliness, and they picked up a conversation he couldn’t follow.

He turned onto Broadway beneath a storm of rail cars, passing the street merchant’s books, DVDs, and jeans hung over the park fence. He got into the street because of the green boards blocking off a construction site; Jared crab-walked by people in the narrow passage. That smell of the fish markets sucker-punched him in passing. He wanted to hold his nose but didn’t; the stench pushed his stomach up through his chest into his throat.

At the basketball courts, Jared crossed the street to the pizzeria he called Ronald’s—the name written in mosaic over the brick oven. A late-night crowd stepped up to bark orders; people in transit to and from bars, basketball players, and a family with kids sat at the tables, slurping and mauling slices. Jared ate his slice like a weirdo, ripping the crust off first and dripping pepperoni juice on it to make a moist and spicy breadstick. Then he folded the flaccid triangle into a sort of Hot Pocket and devoured it. He ordered Michelle’s slice and soda and started the walk back.

The basketball courts had emptied. Under the tracks, the Broadway crowds had thinned significantly. The grocery store was still open with customers going in and out; familiar beggars spun a web between the subways stairs and the door, behind which a security guard clutched his muscled arms.

Jared kept his pace, bypassing a few loners who didn’t look up. He took in the anonymity of the blueberry-skinned sky and allowed his mind to wander. At the garden he turned left on Greene. The salsa music had softened but the cowbell clopped on to carry him home. His ears followed the bassline as he marched under a canopy of trees in front of a row of fenced-in houses without lamps. Stepping over the roots that broke apart the sidewalk, Jared heard other sets of feet playing a counter-rhythm to his own. A gate opened and someone came out at a swift pace behind him. He couldn’t tell how many people were trailing in his wake. Eyes in the back of his head registered the nearest presence as a neighborhood teen, possibly with a dog, walking toward Bushwick Ave. He heard the wheels of a cart.

As Jared reached for his key to the door of his apartment, a meaty hand, then a shoulder, then a face blocked his way. “Give me a slice of pizza,” said a guy in a baseball cap, gingham shirt and jeans. He was a good deal shorter than Jared and stocky. Proportionally, his look and build were what you would conceivably get if you crossbred Mario with a Ninja Turtle. His face was pudgy and round.

“Come on. Give me the slice.” The man did not back down, and Jared was uncomfortable with how the steps allowed the man to stand above him. The guy persisted and soon whatever he was saying seemed to strip down to a bare, repetitious pleading: “Give me pizza!” Jared backed up. Their eyes locked intensely for two seconds. Jared’s cool boiled into a rage. “Get the fuck away from me. You’re pissing me off. You’re targeting me.” There was an old man coming up, pushing a cart of bottles, so he said it 10 times louder. “You’re targeting me! You followed me. You singled me out.”

“I just want the pizza. Don’t make this get ugly.”

“Get the fuck away from me,” Jared screamed. “I should call the cops on your ass.” His fist clenched the white bag covering the grapefruit soda. On level ground, this guy stood at least a head below Jared. Unless he had a gun or knife the man was growing less intimidating by the minute. It wouldn’t be worth it to bash him over the head. Jared eliminated the possibility of a scuffle as he retreated a few feet toward Bushwick Ave. I shouldn’t have to run around the block to ditch this guy, Jared thought. But it would be a nonsensical waste to do something brash and then have to answer to the cops.

The guy stepped forward with his ridiculous phablet extended. “Don’t make me call my boys.”

“I know where you live now.” The man was making a call. A woman walking on the other side gawked with a disturbed look. This was Jared’s chance. He immediately thought of football. He’d have to cradle the pizza like a pigskin and make a charge for the end zone: a herd of buffalo stampeding a lion—the hunter become the hunted. Jared darted first toward the guy who backed up and then to the door which he wrenched open and then slammed. The hallway was clear. His elbow creases and knees pulsed with the aftershock, and he fought against a collapse on the stairs.

He entered the kitchen to find Michelle at the sink. He dropped the pizza on the table and was out of breath. “A guy wanted to mug me for your pizza.”

“He said he was calling his boys. He knows where we live.”

“I feel like I have to be the only asshole to ever attract a pizza mugger.”

“I guess Ronald’s pizza is a hot commodity in this neighborhood.”