Lavie Tidhar’s Unholy Land is an example of creativity that justifies itself. 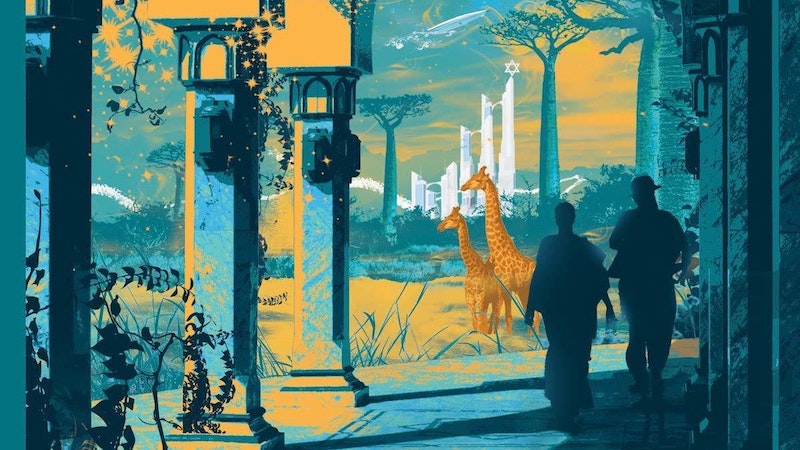 Sometimes a book succeeds because the author trusts their material and creativity instead of their conscious judgment. Or at least appears to.

Thus Lavie Tidhar’s Unholy Land, the story of Lior Tirosh, a writer of pulp detective stories. The book opens with Tirosh in a German airport about to return to the land of his birth to visit his sick father—but that land is Palestina, a country carved out of Uganda in the early-20th century as a homeland for the Jewish people. Once in Palestina, life imitates art and the writer of mysteries becomes involved in a somewhat half-hearted search for his missing niece. The real story is the world around Tirosh, though, or more specifically the way in which the world shifts about him; the way he can make the world change.

This is a world in which World War II didn’t happen, in which the Final Solution didn’t take place, in which the Jews of Palestina—called Palestinians—are busily building a great wall to keep the indigenous peoples of their new homeland out of the country the Palestinians believe is theirs by right, while at the same time unconsciously co-opting pieces of indigenous culture. But then we find there are other worlds, too, and the book gives us the points of view of characters from some of those worlds. It’s not surprising that a world very like our own comes into play.

The core of the book is science fiction more than a detective story. The mystery elements help move things ahead, if sporadically, but mainly push Tirosh through some kind of plot as other characters who better understand the nature of reality work out what’s really going on. The quest for the missing niece is less important than the question of overlapping realities; the numinous, what is most startling and involving, comes from cosmological wonder and not the mystery of human crimes.

Unholy Land is a clever book, but not distractingly so. Usually meta-fictions are alienating, too overtly slick, not just intelligent but insisting on their own intelligence. Here, the story of genre author Lior Tirosh by genre writer Lavie Tidhar feels like the writer probing his own choice of career path.

Like the Israeli-born Tidhar, Tirosh is said to have “won a small award” for “a weird political novel called Osama.” (Tidhar’s book won the World Fantasy Award; other books of his have won the Jerwood Fiction Uncovered Prize and the John W. Campbell Memorial Award.) But most of Tirosh’s work has humbler ambitions, and he’s repeatedly challenged over the value of the escapism he writes. Tirosh’s own quest comes off as a parody of a detective story, as though the book is a postmodern parody like Paul Auster’s New York trilogy, Tirosh’s life sending up the melodrama he imagines in his fiction.

Unholy Land is more than that, though, because in challenging the validity of Tirosh’s work Tidhar is challenging his own work. Again and again the book asks what the point is of creating imaginary other worlds. It comes up with a number of different answers—thought experiments, road-maps for future revolutionaries—but none very convincing. We’re left with the strong sense that mere reality is not enough.

It’s interesting that there’s a subtext of Tirosh, a creator of art, possessed of a power that mere political people don’t have. They manipulate him and his gifts, or try to, because power sees the making of other worlds only as a way to more power. In this context it’s worth noting, as Tidhar does, that Theodor Herzl wrote a kind of Zionist science-fiction novel (Altneuland, or Old New Land) and Unholy Land challenges that book in a number of ways. Again: art and power.

The book’s devices tie in to each other in intricate ways that feel more than merely clever. For example,  Kabbalistic terminology is used to describe other worlds, naming them Sephirot—“emanations,” the term used for the 10 stations on the Kabbalistic Tree of Life. That fits with the book’s Jewish themes, but also the Tree of Life turns up repeatedly as a symbol in the book, and the novel’s divided into 10 parts; there’s a density of symbol here. But also an emotional core, even beyond Tirosh’s self-doubt over his art. Tirosh has recently lost a son named Isaac, and if naming a son “Isaac” almost insists again on Old Testament resonances, Tirosh also finds himself moving relentlessly toward a reunion with his father, a great Palestinian general.

Crucially, though, Unholy Land works as a human story as well as a symbolic one. From the first scene, in an airport that is a place between places, with Tirosh a Jew in Germany returning to a home that is a dubious home, the book creates human moments out of its symbols in order to question those symbols. What’s reality? What’s escape? Is the idea of a home something real? Or only a dream of childhood? Or the ultimate escapism?

Much of the book questions the value of escapism, and Tidhar refuses to present a full-throated defense of escape. But he goes some way to justifying escape, if only by contrast. There’s still a sense he’s dissatisfied with mere fiction; something in the way he characterizes it as an evasion of direct action in the world. If so, then this is a book that succeeds because that dissatisfaction’s not indulged. Unholy Land is an example of creativity that justifies itself.